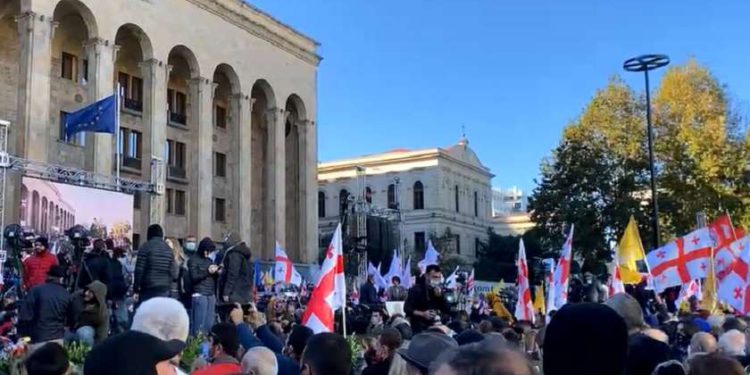 At today’s rally being held in front of the Parliament of Georgia in support of the currently imprisoned Chairman of the United National Movement, Nika Melia, the united opposition has announced a plan for protests.

Khatia Dekanoidze, a member of the United National Movement, announced that on March 2, together with supporters, they plan to picket the parliament building, “So that the regime can hear their voice.”

On March 5, the opposition then plans to picket the Government House building in order to “Make their voices heard by Bidzina Ivanishvili’s distinguished servant, PM Irakli Garibashvili.”

Another rally is scheduled in front of the Ministry of Internal Affairs on March 9. Dekanoidze explained that this because this agency is “the executor of one person’s demands today, it arrests activists, violates human rights and does not understand that their main purpose is to serve the country and not Bidzina Ivanishvili.”

“On March 11, we plan a rally in front of the main symbol of this regime, the court, which has become a symbol of corrupt judges Murusidze, Chinchaladze, injustice, and selective justice.

“On March 13, at the end of these rallies, we will meet again in front of Parliament. Of course, this will be another very important rally for freedom”, one of the leaders of the opposition added.

The opposition parties have been holding rallies in the capital since the detention of opposition leader Nika Melia.