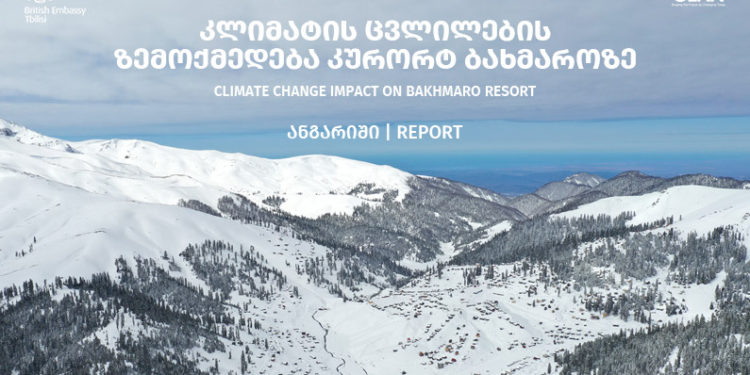 Climate change has a strong impact on mountainous landscapes such as the resort area of Bakhmaro, which will be turned into a ski resort, according to the Government of Georgia. Therefore, it is necessary to assess the impact of climate change before a resort development plan is created, especially on such important components as: precipitation distribution and snow cover. This assessment will be an essential factor in the Climate Adaptation Plan, enabling relevant government agencies to pre-determine climate change adaptation measures.

CENN, with the support of the British Embassy, conducted a survey ‘Impact of Climate Change on the Bakhmaro Resort Area,’ aimed at studying the climate of the resort area of Bakhmaro, a townlet and mountainous resort area in the Chokhatauri district of Guria in western Georgia, and assess the existing climate parameters, based on which the impact of climate change was determined and recommendations for specific adaptation were prepared.

“Climate change is one of the pressing challenges facing the world today. The UK is committed to combat climate change more than ever, and we are taking action at home and abroad.

“Tourism industry is one of the most vulnerable to climate change and one of the most significant for the Georgian economy. Therefore, supporting climate adaptation plans for tourist sites such as Bakhmaro is important for the British Embassy. Bakhmaro climate adaptation project paves the way for more climate-resilient tourism development in Georgia and contributes to wider climate change goals in the country,” stated the British Embassy.

The survey results were presented to relevant stakeholders in April. The results obtained will help in the proper development and planning of the resort.

The study identified two important issues that, according to experts, are necessary for the proper planning of the resort, these are: shifting the seasons and the violation of the hydrological regime.

Impact of climate change on precipitation and temperature

Analyzing on-site monitoring and satellite data, shows that there is a small decrease in precipitation is observed in the resort of Bakhmaro and its surrounding area, especially in the last 10 years, which was also confirmed by snow planning data. It is therefore noteworthy that some of the effects of climate change have already been reflected in the resort area. As of today, the shifting seasons and the scarcity of water resources at certain points in time are evident, especially during the winter (January, February) and summer-autumn (August-September) seasons, which negatively affects both water resources and snow cover. In addition to atmospheric precipitation, obvious changes due to climate change are evident in the temperature regime. Not only the average temperature of the year changes, but also the seasonal change is obvious. The increase in average annual values of temperature has been observed in the perennial variability of temperature since the 1980s. The average annual values of temperature differ statistically significantly between decades. No significant perennial variability was observed according to the annual total values ​​of precipitation. Temperature increases in the spring and autumn months affect the formation of snow cover, which directly affects the length of the ski season and the quality of incoming snow.

Atmospheric precipitation in the river Bakhvistskali basin and the temperature regime plays an important role in the formation of the river hydrological regime. Therefore, the hydrological part and the climate, soil and vegetation cover must be taken into account. Floodless periods coincide with the temperature regime caused by snowmelt. Winter (January-February) and summer-autumn (August-September) are water short periods in the valley. There is a significant decrease of precipitation during the warm season, while the opposite results are expected in the winter months, which will have a direct impact on the hydrological regime of the river and its tributaries. The minimum runoff of the river is reduced by about 10% and an increase in this deficit is inevitable in the future, especially during the summer.

The main task of studying the snow cover is to determine the thickness, density and water content of its layer. To determine the snow stock, snow is observed and measured.

Regarding the drinking water supply, most of the sites were arid, indicating that the source outlets are actually surface groundwater, which is why water does not actually flow during the winter. In addition, the vast majority of the selected sites are located on the southern slopes, which receive more solar radiation than the northern slopes. Also, the high rate of evaporation and transpiration by plants uses water. It is therefore unlikely that the above sources are consistent, as confirmed by a local population survey. The ability to supply drinking water to the resort of Bakhmaro is most important based on the permanence of the water and the height of the intake above sea level, so that the water can move in the system by itself. Taking this into account will enable us, to provide the population with permanent drinking water and to save on operating costs, which is a key component of sustainable development.

The preliminary results of the survey display a slight increase in snow covered areas throughout the year starting from 1990. This does not mean that there is more snow in the Bakhmaro area in recent years. In fact, both the trend in snowfall and in snow height are decreasing for the time-period starting from 2010. These results suggest that while there is an increase in snow dispersal throughout the whole Bakhmaro area (forest included) there is at the same time a decrease in snow precipitation and in snow height. In other words, there has been less snow in recent years, but this latter is more widespread. Also, the snow trend obtained from Landsat 8 satellite imagery shows that there seem to be a decrease in snow cover in the most recent years for the areas located higher up in the mountains.

Many types of data were processed within the project, the results of which will help in the proper development of the resort. Especially on the road to adaptation to climate change, as the latter is clearly a major challenge even in the current situation. It is noteworthy that the impact of climate change on temperature is obvious today, which in turn changes the microclimate and general hydrometeorological parameters, which has led to two important aspects, including the change of seasons and the violation of the hydrological regime.

The survey results showed that in terms of the change of seasons, the rapid change of temperature regime and the emergence of unambiguous warming parameters are noteworthy. Heavy rains and floods have also increased, which is why it is necessary to prepare a map of flood-prone areas and limit development as part of a comprehensive plan.

The study conducted by CENN, supported by the British Embassy, concluded that in order to adapt to climate change and make rational use of existing water resources, it is necessary to implement the following recommendations: