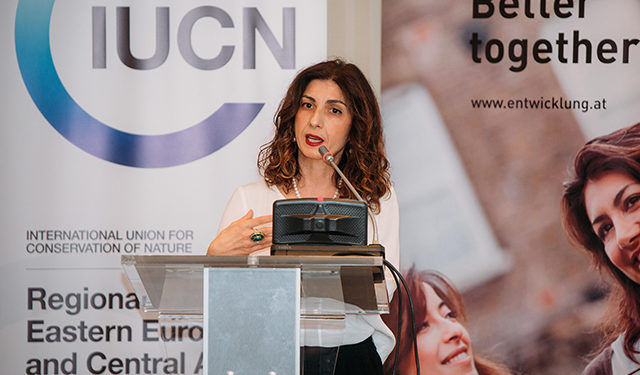 Data provided by the International Union for Conservation of Nature (IUCN) shows that drought is a global problem that affects an estimated 1.5 billion people, in particular, households that rely on climate-sensitive livelihoods such as agriculture production and livestock rearing.
For instance, drought can trigger widespread vegetation shifts as woody plants die off and are replaced with unpalatable grass species. This affects the availability of quality livestock forage with a resultant effect on livestock health. By disturbing hydrological connectivity and reducing water flow, drought also affects agricultural productivity, thus worsening food insecurity.
To tackle this problem, which is also a common and frequent one in Georgia, on October 26, CENN hosted a kick-off meeting of yet another important environmental project, entitled ‘Restoring Ecosystems to Reduce Drought Risk & Increase Resilience.’
The project is funded by the Austrian Development Agency (operational unit of Austrian Development Cooperation) and is implemented in Georgia by CENN under the oversight of IUCN. CENN has been a member of IUCN since 2013. One of the project’s key directions is to tackle the problem of land degradation across Georgia, a problem which, unfortunately, is growingly affecting the locals due to the mismanagement of natural resources.
The project builds on IUCN’s Nature-based Solutions approach, guided by the vision of a future where human economic activities are in harmony with nature and don’t affect natural biodiversity. 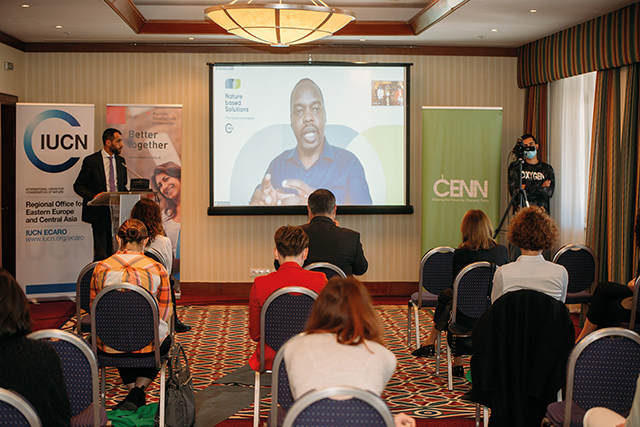 The launch ceremony of the project took place at Courtyard Marriott Hotel in Tbilisi. The meeting was moderated by Karlo Amirgulashvili, Head of the Biodiversity and Forestry Department, (MEPA) who, notably, was recently elected as a member of IUCN Councilor for East Europe, North and Central.
Welcoming remarks were delivered by Maia Bitadze, Chairperson of the Environmental Protection and Natural Resources Committee, Parliament of Georgia; Nino Tandilashvili, Deputy Minister of Environmental Protection and Agriculture of Georgia (MEPA); Boris Erg, Director of IUCN Regional Office for Eastern Europe and Central Asia; and Nino Shavgulidze, CENN Board Member. The representatives of the legislature and environmental organizations unanimously welcomed the launching of the new timely initiative aimed at fighting climate change and its negative impacts on the environment and the country’s agricultural sector as a whole. They thanked CENN, ADA and IUCN for launching such a project in Georgia and expressed readiness for maximum participation and involvement for its proper and fruitful implementation.
Against the background of climate change, the need to fight land degradation is gaining importance, the speakers highlighted. The problem is particularly noteworthy in eastern Georgia, which is proven by various studies conducted in the country. The importance of raising awareness among farmers in this direction was also emphasized, as they need to learn more from examples of international practice on how to introduce rotational grazing principles and other Nature-based Solutions. As part of the project, various awareness-raising activities are planned in the regions.
Boris Erg, Director of the IUCN Regional Office for Eastern Europe and Central Asia, noted that the activities in Georgia will be realized as a part of a global project, and expressed hope that with the involvement of CENN, ADA and relevant state agencies, the project will be very fruitful.
“Droughts can have different causes, including low rainfall. Drought is often treated as a natural occurrence; however, droughts may occur even in years of normal precipitation. This highlights the human causes of drought due to mismanagement of natural resources.
“This project will certainly support the government and stakeholders in Georgia to better understand the problem of drought and how to manage it. They will be better informed about ways to prepare, respond and recover from drought,” he noted.
The new initiative is expected to increase collaboration prospects and contribute to launching similar projects not only in Georgia, but across the Caucasus region in the future. The collaboration is expected to reach new stages and cover more areas.
Nino Shavgulidze, CENN Board Member, thanked partner organizations, state agencies, IUCN, and praised the contribution of ADA, which has supported various environmental projects in Georgia over the years.
“We are happy that Georgia was chosen as a target country for this project. This initiative will be implemented in close cooperation and in coordination with the Ministry of Environmental Protection and Agriculture, which will significantly contribute to the institutionalization of achieved results and their long-term sustainability. Implementation of this project will contribute to the fulfillment of international obligations by the Georgian side, from the EU Association Agreement, to the UN Sustainable Development Goals (SDGs) and more. Nature-based Solutions aimed at reducing drought risk will be introduced which will positively affect the country’s ecosystem as a whole,” she concluded.

Alexandra Ibragimova, Ecosystem Management Project Officer from IUCN ECARO, and Nino Bregadze, CENN Project Coordinator, introduced key components and priority directions of the project to the audience. The presentation showed the severity of the problem, in particular, the fact that the frequency and severity of drought is increasing worldwide. The cost of droughts is US$35 billion per year, affecting the poorest people, and 83% of these losses are in the agriculture sector, with poor management practices leading to land degradation.
The key causes of land degradation in Georgia are overgrazing, reduction of forest areas, unsustainable agricultural practices and assimilation of land for urban growth, the presentation emphasized. However, through introducing Nature-based Solutions and sustainable management of natural resources, these issues can be resolved gradually, which is one of the main goals of the project. 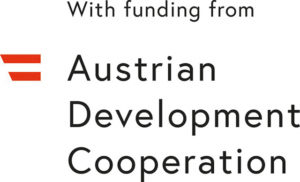