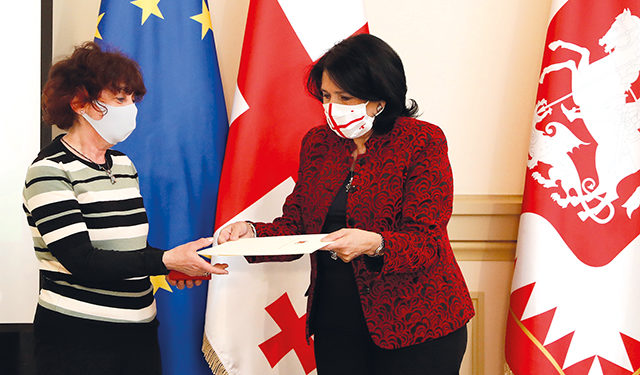 One year ago, in early January, an unfamiliar pack of highlanders passed through the arched entrance of the famous 13th-century Orthodox Sioni Cathedral on the banks of the Mtkvari River in Old Tbilisi.
The hall was already crowded with Tbilisians, among them many notable faces, all gathered to pay their respects to the writer Davit Tserediani laid in the center of the nave.
The strangers had travelled day and night from the mountain village of Latali in Svaneti to conduct an ancient funeral rite known as the Zari, a complex, polyphonic dirge without melody that rises slowly in pitch and intensity, amplifying the delirium of grief.
Under the Zari, Sioni Cathedral’s lofty interior, the medieval apses and wisps of incense, briefly gave way to a much older, and much more unsettling atmosphere.
“He took our name from our small village and made it known to the world!” the Svans repeated with pride throughout the day.
This Wednesday, on January 26, 2021, Davit Tserediani was posthumously awarded the National Vazha-Pshavela Award, given every two years to authors whose work “gains general national recognition for its artistic dignity and is imbued with the universal ideals of freedom, humanism and patriotism.” His final two works were published in 2020 after his death, a collection of his poems, Parapet, and his translation of Lorca’s Gypsy Ballads.
A life-long introvert, Davit Tserediani gave interviews rarely, and only at the behest of family and friends. Although frequently granted Georgia’s most prestigious literary awards, he attended celebrations reluctantly, if at all, often asking his wife of 30 years, Professor Manana Gharibashvili of the Tbilisi State University, to accept his awards in his stead.
As if keeping with this tradition, this Wednesday, she accepted the Vazha-Pshavela Award on his behalf from President Salome Zurabishvili at a ceremony held at Orbeliani Palace.
Davit Tserediani grew up between Tbilisi and Svaneti with his mother, teaching himself languages from a young age. His father, young philosophy student Besarion Tserediani, was taken by the Soviet authorities when Davit was only a few months old.
His love of the folk literature of Svaneti and the Svan language, Georgian’s Kartvelian sister-language, imbued his poetry with the authenticity and ancientness of a Georgian proto-language, to create a pure and original Kartvelian voice.
His magnum opus was his translation of Faust Part One (2012) and Faust Part Two (2018), for which he received the Givi Margvelashvili Award from the Goethe Institute for “special contributions to the cultural relationship between Germany and Georgia.” In additional to three Saba Awards, Tserediani was also the recipient of the Shota Rustaveli National Award, the Saguramo Award, the Georgian National Award, the French Georgian Institute Award, and the Ivane Machabeli Award.
A new award administered by Writers’ House and funded by the Ministry of Culture now bears his name: The Davit Tserediani Award for Contributions to Literary Translations.

Among his most famous translations was also the poetry of François Villon, republished as a collection in 2014, as well as a 3-book set of Grimms’ Fairy Tales (1992), ubiquitous in childhood book collections. His notable early work includes Svanuris Simgherebis Kvaldakval (In the Footsteps of Svan Songs), which transforms the songs and folklore of Svaneti into Georgian poetry.
As a literary critic, he was known for his commentary on the great poets Guramishvili, Akaki Tsereteli, and Galaktion. In his essay “‘This Persian Story’,” his original reading of The Knight in the Panther’s Skin envisions the great epic poem about two ancient kingdoms as a double-vision of Georgia itself.
Upon his passing, a petition quickly circulated signed by nearly all prominent Georgian literary figures demanding he be buried in the Mtatsminda Pantheon, where a free plot lay next to his close friend, the prominent translator Batchana Bregvadze. Tbilisi City Hall’s refusal was cause for a minor scandal, and his remains were instead laid in the Pantheon of Public Figures at Makhata. Yet Davit Tserediani no doubt would look on all this fuss with an impatient indifference and, according to his daughter, would have preferred a modest burial next to his mother.
In his final interview in 2019, granted in anticipation of the release of his translation of Gypsy Ballads, he shared his insight into the creative process of poetry writing: “For Lorca, inspiration was necessary for poetry, yet a poem was not written under inspiration. Inspiration is like a journey from which you have impressions, or rather the scraps of impressions… voices, images: it can be many things. But when you are writing the poem, inspiration itself can be distracting. This is when you are biting into each word, evaluating its taste, testing its colors, how they each go with one another. [For Lorca] this is when creative inspiration was not so important. But, of course, everyone writes in their own way and says things their own way…”
Davit Tserediani’s poem “Mizghvna,” is dedicated to his father Besarioni, a victim to Stalin’s great purges. It begins “May your ashes be light.” The poem moves to a memory of a beloved nun in Svaneti, the shadows of her shack and her forbidden chapel. He sees her here, leading her goat to shrubs. All at once, she disappears. Her goat spattered with bullets. Her shack burned. Her spirit then joins all those who “left behind them no graves, who became the clay to line secret tunnels, whose bones were scattered across the icy ground.” In the final stanza, we are told that when the seed sends up its first shoot in the mountains, a great struggle has already taken place. The shoot is surprised to find the sunlit earth of Spring still steaming: “The end has not yet come
Davit Tserediani is survived by his wife Manana Gharibashvili, and his two children Maia and Archil Tserediani.