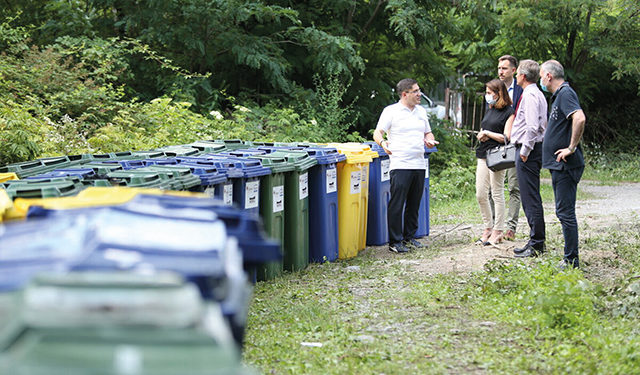 Environmental pollution remains one of the major challenges of the modern world. Proper waste management and recycling practices are important not only to avoid negative effects on the environment and save natural resources but also to play an important role in ensuring the health of the population. Caritas Czech Republic has been working in the environmental sector since 2019 and most of its projects aim to develop responsible waste management practices in the regions of Georgia.

Caritas Czech Republic’s environmental projects cover several areas, including support to the infrastructural development of the regions of Georgia for sustainable waste management and providing technical assistance through consulting and expert support. These interventions include the introduction of waste separation, recycling and composting practices in Racha-Lechkhumi and Kvemo Svaneti region and working on solving various problems associated with waste management in Dusheti and Khulo municipalities. 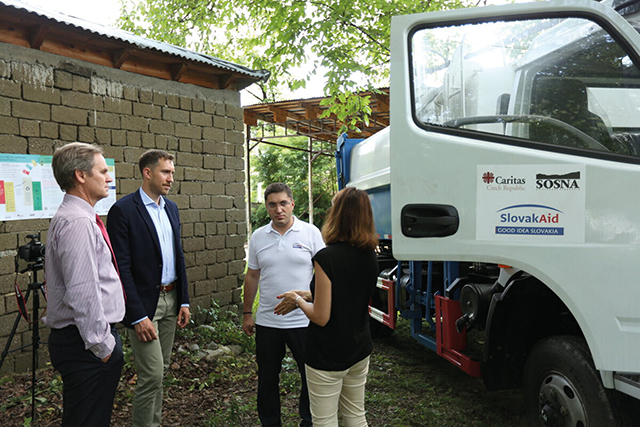 Development of Waste Management Plan and Procurement of Garbage Trucks
Waste is a resource that, if managed properly, can bring some economic benefits. Waste recycling reduces energy consumption, pollution of the environment and the need for waste disposal areas. Waste such as glass, paper or cardboard, metal and plastic can be collected separately and recycled so that the amount of waste in the environment and landfills will be significantly reduced.

With this in mind, Caritas Czech Republic’s environmental interventions have been addressing waste separation and recycling issues since 2019, raising awareness about sustainable waste management importance and introducing relevant practices in the regions of Georgia. At the same time, with various donors’ financial support, our organization has supported the infrastructural development of the regions for waste collecting, separation and recycling.

With the financial support of the EU ENPARD programme, our organization procured and handed over a 20m3 garbage truck to Khulo Municipality, which significantly improved the waste management practices in the area. As for Dusheti Municipality, SlovakAid supported the procurement of 14m3 garbage trucks and garbage containers equipped with modern standards worth 100 000 Euros. Furthermore, Oni Municipality was provided with a 7m3 separate waste collection machine, 135 pieces of 240-liter containers and 60 pieces of 1100-liter containers required for the collection of separated waste.

“The results in terms of waste separation are significant. Oni Municipality now has an opportunity to successfully separate waste and facilitate the recycling practices, resulting in a small but significant contribution to the landfill in terms of waste reduction. And this aims at mitigating climate change by reducing greenhouse gases”.

Successfully implemented model of waste recycling in Oni municipality formed the basis for uniting the rest of the municipalities in Racha-Lechkhumi and Kvemo Svaneti region around the inter-municipal model of waste recycling. With the financial support of the Government of Lithuania, the European Union and KfW, Caritas Czech Republic raised awareness about waste recycling importance among the municipal governments and the population of Racha-Lechkhumi and Kvemo Svaneti region. This has contributed to taking important steps to implement sustainable waste management practices in rural areas.

Village Utsera Becomes a Role Model for Developing Good Composting Practice
In the regions of Georgia, up to 60% of the waste in landfills is organic waste, which decomposes and releases carbon dioxide and methane. This contributes to climate change and is also harmful to human health.

Composting is one of the simplest and most cost-effective methods of preventing environmental pollution. Recycling food and other organic waste into compost provides a range of environmental benefits, including improving soil fertility, reducing soil erosion and greenhouse gas emissions, recycling nutrients, and mitigating the impact of droughts. Compost is rich fertilizer for organic farming.

Manana Metreveli, a resident of village Utsera of the Racha-Lechkhumi and kvemo Svaneti region, has been making compost in the ground hole for years. Through the environmental project carried out by Caritas Czech Republic, she received a wooden compost box along with necessary equipment for compost making and underwent relevant training sessions on how to make compost properly. Manana says that the box is too big and as she lives alone, she invites all the villagers to make the compost together in her yard:

“They often bring the waste to my yard and call over me – “here, Mananiko, I brought the waste to put in the compost”. I am especially happy when children are actively involved in such activities – they see what we are doing and repeat it, and they feel responsible. Raising awareness on this topic is of great importance, and in this regard, the guidelines distributed by Caritas Czech Republic and the practical training sessions conducted on the spot played a great role.”

Manana says that despite her own experience of making compost for years, after Caritas Czech Republic’s training sessions she found out some information that she did not know before:

“I did not know that some household waste can spoil the compost. For example, I used to put cheese in the compost, but at the training sessions provided by Caritas Czech Republic, I learned that it is better to avoid putting it in compost as it attracts rodents.”

Caritas Czech Republic provided 56 subsistence farms and 15 schools in Racha-Lechkhumi and Kvemo Svaneti region with all the necessary equipment for making compost.