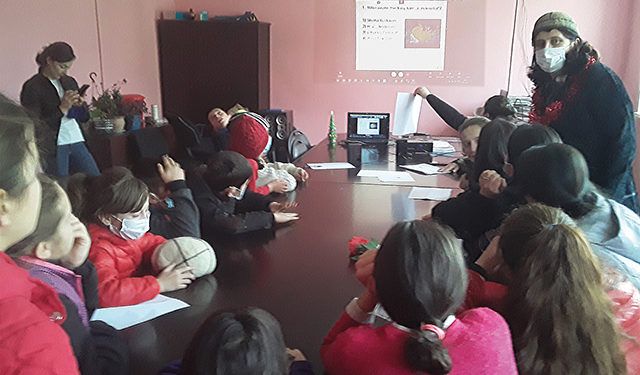 Out of nowhere, a couple of months ago, came a call to my wife’s phone from a country code we didn’t recognize, which turned out to be Lithuania, one of the three Baltic countries dragged into the Soviet Union during World War II, now a booming EU state. The caller was interested in doing some humanitarian work connected with a school specifically in Svaneti, having been there, and had found us via our location on Google Maps. Could we talk? Sure, always glad.
The idea was to connect our school in Etseri with a similar-size one in a village (Giedraiciu) in his country. Our respective pupils would have what he called a “brain battle” via live Skype link, a quiz basically, as well as exchanging information about or schools and locations, hopefully leading to permanent friendships between the schools and their pupils. Part of the deal was a hefty donation of money from his company’s charitable donations group, to be used as we saw fit for school materials for our children here. With Christmas coming up, the timing would be ideal for a delivery of presents.
We happily signaled our wish to participate and organize things from our end. Although our Magti modem’s battery had recently exploded inside, turning into a little puffed out pillow (subject of a future, ire-filled article), I had been using my cell phone as the replacement modem, and this would suffice for the required internet connection if the school’s internet wasn’t working. Not as much bandwidth, but a lot better than nothing. My wife began making calls to children and teachers to set things up.
We put together several boxes and bags of school things: stationery of many kinds, art supplies and so on. A few of the older girls came over to help us sort these into gift bags for the various classes. They began recording videos to show the Lithuanian children: Svan songs, a recipe for the all-important Svan salt spice mix, introductions to themselves and Etseri, and so on. These would go into a Google Drive folder to be shared with the other school, including lots of my best photos of the village in all seasons. I borrowed a Father Christmas costume to get into my role as gift-giver.
The big event began with introductions of our schools and villages, theirs being about 50 km away from Vilnius, their capital. The internet connections at both ends were fast enough for a group Skype video call, so technology really came through. They showed us slides with written historical information (the school began in the 18th century) and an enviable drone video of the picturesque community, complete with forests and lake. Now, Etseri and Svaneti are nothing to sneeze at landscape-wise, but the simple exotic location we were seeing made the pupils sigh with longing for something new. We do hope a student exchange travel holiday can be arranged!
Then came the Brain Battle, with their remotely connected children and ours in one room as two teams, debating for a minute to come up with answers to multiple choice questions of world geography and history. It ended up being close, with Lithuania beating Georgia 12-10. Not bad!
Father Christmas, locally known as Grandfather Snow, made his appearance at half-time, handing out the assembled gift bags one per participating class, for which huge thanks to the employees of the laboratory equipment company in Lithuania for their donation (http://www.linealibera.lt/en/about-us/). We pledged the beginning of a beautiful friendship, and are now seeking ways to move forward with next steps, such as pupils getting to know each other on Facebook and other social media platforms.
Someone connected with the Lithuanian Embassy to Georgia has also now been in touch, wondering about book donations of a work translated from their language to ours and a further visit from that embassy. Long-term, once COVID-19 has eased up enough to allow border openings, we still hope for the two-way exchange. Until then, we’ll remain in touch.