Back to Spring: Etseri, Svaneti 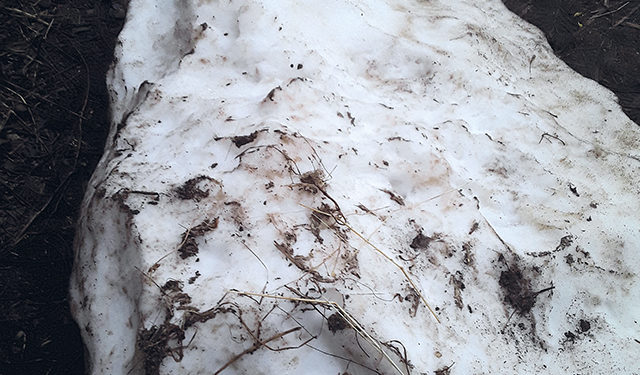 It has been a few months of driving a whole season forward in time each visit to Zugdidi, which hardly gets winter at all and starts into spring while Upper Svaneti is still deep in snow. At last now I can report that we are catching up!

The only bit of snow left on our whole land is a patch about 1 by 2 m behind the barn. It has gathered there off the roof, away from the sun, and only now that night temperatures are staying above freezing is it melting properly. A few more days, and what was tens of tons will have evaporated. The equivalent area on the north side of the house is already gone, but this barn bit was higher than I am, so it takes longer.

The land has been running with meltwater and rain, tuning our backyard into a temporary muddy swamp as it always does. Just as well there is lots of hay and other vegetation whose roots hold the soil, or it would all wash away. Now, while the clayey ground is still softest, before the sun bakes it hard, there is plenty of work to do.

There is the hoeing of areas we want to plant with vegetables and flowers, and clearing up land around the raspberry canes and fruit seedlings. Then we give them a bit of manure for richness. Since finishing with the bovines, we don’t get more top-ups of manure except a bit from the chickens; but what we still have left is plenty for a while yet. Then we’ll plant: potatoes, corn, pumpkins, cabbages, tomato seedlings to come soon from Kakheti, onions, garlic, herbs, all sorts of flowers to beautify the place. All small scale, but still plenty of work. At least we don’t depend on any of these things to eat or sell to survive; they’re just extras. I can even turn rose petals into jam, or liqueur, and this year will be trying an elderflower liqueur for the first time…

Fencing is always an important renovation chore after the ravages of winter. The fence posts, ideally if oak or cherry, will have moved or risen, quite a few of them, and must be pounded back down, again while the ground is still soft. Any which are rotten we must replace. Fence slats also to maintain, and wire to tighten by twisting it in places into a small knot. The cows are ever prowling and hungry for fresh green grass. Some of them do have the bad habit of “testing” fences, so barbed wire helps to deter them from this destructive habit. Any that do get through I beat as hard as I can with a stout stick, on their way out, to impress on them that Here Is Only Pain. No permanent harm, but maybe a lesson to learn and dimly remember, I can only hope.

Some sections of fence are common between us and a neighbor. The procedure is to negotiate renovation: I’ll do it this time, you can do it next. Some sections are getting old enough from years of service that the slats all have lichen growing on them and will all eventually need replacing, so the commitment is not a trivial one. But it must be done, or the Beasts will Enter and Ravage.

I recruit an extra pair of local hands for the fencing work as it’s best done with two people. One to hold the fence post in place while the other pounds it in with a sledgehammer; otherwise it tends to wobble, and the hammer does need a two-handed use, as heavy as it is. Or, if we need any new posts, one to hold and the other to sharpen an end with the axe. Once we’ve pounded them in, I also beat down the ground all the way around to make it as dense and hard as possible. There is a Russian inhabitant who has been here for years, working for his host family for room and board, and we involve him for such odd jobs and pay him. He and I get along well, and it’s also a chance for me to practice my Russian, which unfortunately is suffering from years without regular use.

This is what spring looks like up here: late compared to the lowlands of Georgia but no less busy. After months being much more cooped up indoors, it is bracing to work the land a bit and get some fresh air and sun on one’s face. After 9 years of this, I already know what do to, which also feels good. Season, here we come.