Are Russian Spies Hiding in the Waves Of Migrants? 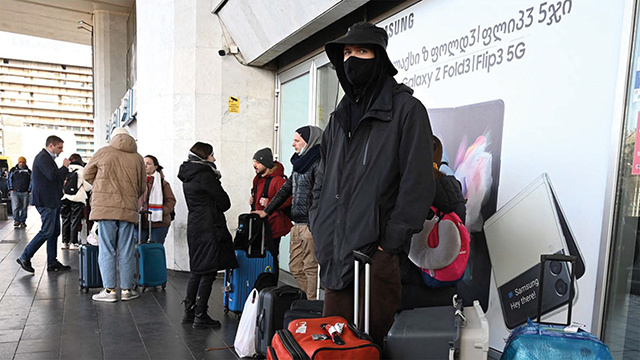 Russian citizens arrive in Tbilisi with all their belongings after traveling from Russia. Photo by Vano Shlamov / AFP

Trains, planes, and automobiles have brought over 400,000 Russian travelers to Georgia in the first six months of 2022, according to the National Tourism Administration of Georgia. Georgia, for the most part, took in these newcomers with open arms. Others were not so friendly, seeing them as unwelcome guests from a nation hostile to Georgia. A smaller contingent of both sides watches this new group of migrants with skepticism and concern.

While many of these people coming to Georgia are simple short-term tourists, numerous others have come as a result of the Kremlin’s repressive policies. Moscow’s crackdown last year on who they saw as dissidents and “foreign agents” forced many to find new homes. The shame of Russia’s invasion of Ukraine was the final straw for them, alongside the loss of job security due to the side-effects of the massive international sanctions. Russian government actions to quell anti-war sentiment in the country further pushed more people to take up residence in Georgia.

The group of skeptics not only contains Georgians but also Russians. The latter sees their fellow countrymen with great suspicion, and some in the security sphere would say rightly so. Russian intelligence assets are keen to keep an eye on the waves of their political opposition moving to a long-time problem country.

The Russian Federal Security Service (FSB) is renowned for their activities in Eastern Europe and the South Caucasus. Georgia has been on their list of activities locations for quite a long time. The FSB, a modern iteration of the infamous Soviet KGB, is particularly well-known for their ability to flip compromised people to work for them. Using their legal or social transgressions as blackmail, these people are coerced to act as informants on behalf of the FSB.

With so many opposition members and supporters fleeing the country to a country that is already on tenuous footing with the Kremlin, the FSB will have to keep eyes on the ground. To do this, they will need to have people mixed in with the migration groups that seem unassuming. As a result, Georgia’s new friends are not all what they may seem.

How does such a notoriously nefarious organization like the FSB find a young political dissident and turn them into a field agent? So many of these people moving to Georgia are doing so explicitly due to their vehement distaste of the current regime. The answer lies in an old KGB methodology that has proven true again and again.

Stanislav Levchenko, a defected spy from the KGB, said in a 1988 interview that the key to exploiting a potential asset lies in one word: MICE – Money, ideology, compromise, and ego are all pressure points that can be used to persuade one to stray from their values and principals. Many of these young and impressionable Russian expats are vulnerable in one or more of these areas.

Leaving hearth and home and settling in a foreign country is expensive. Even the revenue from selling a home, apartment, or car is likely not enough to hold a small family together. A young Russian couple migrating to Georgia will have to contend with temporary housing, travel, initial rent and “moving-in” costs, and even job hunting.

This financial vulnerability could open the door for the new migrant to seek unconventional sources of income. With a nearly unlimited bankroll, the FSB has more than enough resources to offer lucrative compensation packages in return for inside information. While their targets are not trained in espionage, they are not tasked with such assignments. They are only the eyes and ears of the Kremlin in Georgia.

Ideology is unlikely to bring on any new recruits, but compromise and ego are both open options given the individual expats’ personal situation. The FSB, and their precursor, have been well documented to have used compromising information, photographs, and videos against potential agents. Should a Russian migrant have something in their past that could ruin a marriage, destroy their social status, or ostracize them from their family, this could make them a ripe asset.

The ones that find themselves at the end of their proverbial rope and take the FSB up on their offer are immediately pushed into service. They network with other Russian expats, gain the trust of NGOs, and simply listen into conversations for anything that could be of value. Unlike the popular image of James Bond or Peter Gunn, these simply gather information and let the FSB sort out the data.

But why would the FSB trust young and unreliable field assets when they surely have the resources to train and deploy formidable intelligence officers?

The FSB, like any of the large intelligence agencies of the world, are wary of risking too much for too little on unpredictable individuals. The tactic may shed light on a different approach by Moscow. Playing a game of probability, the cost of flipping a large number of potential but undependable individuals may turn more results than one highly trained spy. Simply put, the larger the number of listeners, the higher likelihood of hearing something of worth.

While this certainly does not represent the majority of Russian migrants to the country, there does lie a risk. As the 14th anniversary of the Russo-Georgian war in 2008 arrives, many still bear the scars of Russian military aggression. The idea that subversion and intelligence activities are still being carried out is unsettling.

Georgia’s internal security elements are likely already investigating these reports of young expats being caught in the FSB’s web. However, Georgia’s famously warm hospitality should be the greatest tool to dissuade newcomers from turning against their welcoming neighbors. Already, a small handful of young, would-be agents have shed their cloaks and daggers to come out as victims of the FSB’s intelligence operation in favor of Georgia’s open arms.