The AIDS Healthcare Foundation (AHF) has launched a global campaign “Vaccinate Our World”, to urge leaders from the European Union (EU) and G20 countries to utilize the Summit to commit to real action on global Covid-19 vaccine access. The campaign calls on vaccine manufacturers and international public health institutions to take fair action to vaccinate the world’s population against Covid-19 as soon as possible. To that end, AHF calls on world leaders to promote international cooperation, not politics, as the driving force behind the pandemic.

The target audience of the global campaign is the general public and governments, vaccine manufacturers and international public health institutions. It also includes leaders from the G20 and global financial institutions, among them the International Monetary Fund and the World Bank.
AHF Georgia also joins the above campaign with social media activities and a “Die – in Action” performance. The area around the German Embassy in Tbilisi has been selected for this purpose, as the aim of the campaign is to call on vaccine manufacturers to have access worldwide. Germany is one of the major developers / producers of Covid-19 vaccines and, at the same time, a member of the G20. It’s support for the goal of this campaign plays an important role in the world. 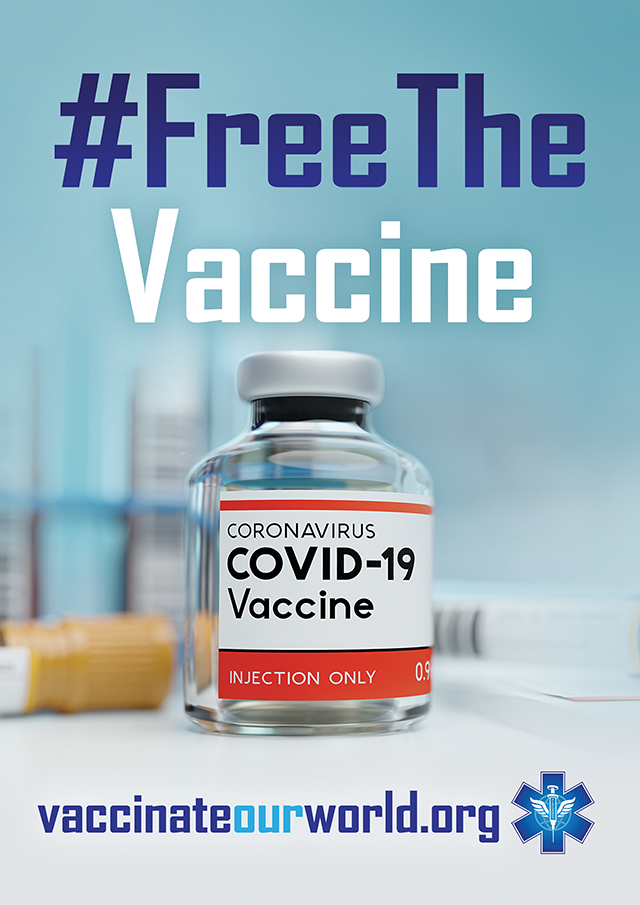 Wealthy nations have drawn global criticism for hoarding vaccines and not urging pharmaceutical companies to share their know-how for vaccine research and development funded primarily by taxpayers.

As of early October, 3.6 billion Covid-19 vaccine doses had been administered globally, with 78% of those going to people in high- and upper-middle-income countries. Less than 7% of the 1.3 billion people on the African continent have received even one dose. The discrepancy is worse for low-income countries, where less than 1% of people have gotten a shot.

“The Covid-19 pandemic has posed many challenges to the world. The problem of access to vaccines is acute, especially in third-tier, poorer countries,” said Nino Khetaguri, Country Program Manager for AHF Georgia. “While large and powerful countries bought lot of vaccines and a large part of the population is already vaccinated, in many low-income countries, only small groups of people are vaccinated and some countries have no access to the vaccine at all. Vaccines must be fairly distributed to all countries: if there is one nation with Covid-19 and no vaccine access, then all countries are in danger. Availability of the vaccine was a big challenge for Georgia until recently, but now a considerable quantity of the vaccine has entered the country. Therefore, the topic is no longer as relevant in Georgia as in other countries.

Nevertheless, Georgia is joining the campaign, because it’s critical that world leaders do more to ensure that all countries have the requisite vaccines to ‘Vaccinate Our World’ and end the pandemic. This includes demanding that vaccine makers share their recipes to boost worldwide production, and ensuring international cooperation on all matters of global public health, particularly pandemics.”

“The ‘VOW’ performance in Tbilisi and other cities across Europe are vital for sending a wake-up call to EU and G20 leaders ahead of their Rome Summit – we will not sit idle while billions of people worldwide go without vaccines!” said AHF Europe Bureau Chief Zoya Shabarova. “Wealthy countries have secured enough vaccines for their citizens, some of which have enough to vaccinate their populations multiple times over. It’s now time for those leaders to pay it forward and show the same care and concern to people in Africa and other hard-hit regions struggling to get lifesaving vaccines and recover from the pandemic. Enough is enough – the G20 must Vaccinate Our World!”

In order to achieve the global campaign “Vaccinate Our World” goals, the world must take several important steps:

Ensure there is sufficient funding for vaccine procurement.
$100 billion must be pledged to secure enough vaccines to inoculate the entire world. Leaders from the G20 and global financial institutions, such as the International Monetary Fund and World Bank, must VOW to step up their contributions immediately.

Boost vaccine production capacity worldwide to 7 billion.
Even with current vaccine production ramped up to maximum levels, vaccine manufacturers are still unable to meet the demand for lifesaving Covid-19 doses. If the world is to fight this and future pandemics, vaccine production must be increased across every continent. A handful of pharmaceutical companies simply cannot be relied upon to vaccinate the entire world.

Vaccine patents must be waived to allow for the rapid scale-up of production.
Covid-19 vaccines are primarily funded by taxpayers, not pharmaceutical companies. We must call for all vaccine manufacturers to openly share their technology and intellectual property – and for governments to ensure Covid-19 vaccines are declared a public good. We can look at past examples, such as the AIDS epidemic, and save the world as we did with antiretroviral medicines for HIV.

The bulk of vaccine procurements have been accomplished through closed-door deals between individual governments and drug companies where little information is released on the details of the agreements, which drives up vaccine costs. During this and any pandemic, all vaccine agreements should be made public to encourage increased cooperation and to ensure all countries are able to access affordable medicines and vaccines.

Advocate for greater international cooperation as the driving force for ending the pandemic.
Many nations, including Canada, the US, UK and those in the European Union have purchased enough vaccines to vaccinate their populations multiple times over. With a worldwide shortage, these countries must be compelled to share their surplus vaccine stockpiles. At a time when the majority of the world has little access to vaccines, nations should establish a framework to ensure the rest of the world can also be protected. If one country isn’t safe from Covid-19, none of us are safe.

“VOW” activists organized recent protests targeting the headquarters of US-based Covid-19 vaccine makers Pfizer, Moderna, and Johnson & Johnson to demand that they halt their ‘pandemic profiteering’ and share their know-how and technologies to increase vaccine production globally. Other advocacy actions have included embassy visits in many countries where AHF operates and a ‘VOW’ protest in Brussels earlier this year targeting EU leaders.

Learn more by visiting VaccinateOurWorld.org, where you can pledge as an individual or as an organization to fight for vaccine access across the globe.

The representation of the AIDS Healthcare Foundation in Georgia (AHF Georgia) was opened in 2018. It provides to the Georgian population free and anonymous HIV rapid testing and webinars on reproductive health. The Foundation actively cooperates with the National Center for Disease Control and Public Health (NCDC), as well as with the medical and non-governmental sector involved in the treatment and prevention of HIV/ AIDS in Georgia.