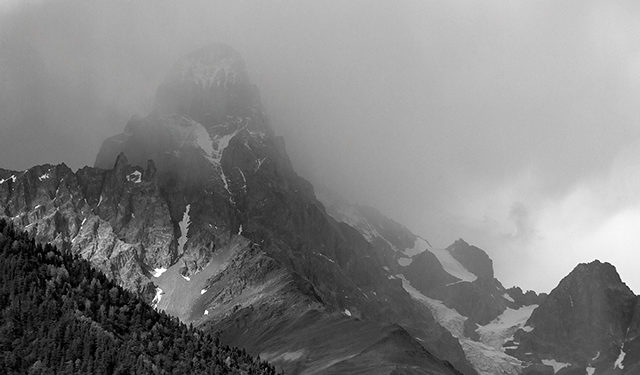 Well, the hardest climb (though not the highest) in the Caucasus certainly has a personality, as much as mountains can. It stunned me again recently with some new looks I’d never seen before.

I was driving back from Mestia to Etseri with my wife and some dear friends who are also guests of ours at the moment, a lady and her niece from Kakheti who had never been to Svaneti before. We saw clouds covering Ushba near Becho on the way out at midday, and I held out little hope for change at our return late afternoon, Mestia also offering no difference. The best time to catch the mountain uncovered is usually mornings, though it can surprise at any time, as my 700+ photos over 21 years point out.

As we swung around the corner where one’s next view happens, above Becho near the turnoff to the village of Tskhumari, there it was. But only just: a veil of mist covered the magnificent top part, barely but definitely visible through it, almost taunting me. I stopped the car and ran out with camera ready, and took a few shots of this apparition.

We stopped again a few minutes later as my wife wanted to check out the concrete block factory above Becho, still going strong since it had finished making raw concrete for President Saakashvili’s road renovation of the region some years ago. There the view of Ushba was still veiled, but getting clearer, yet still as mysterious as ever. While she discussed our café’s materials needs with the factory overseer, I shot away, even finding a smooth puddle of water for much-desired reflections.

Then, business there finished, I decided on a whim to take us on the new asphalt road into Becho itself, to its far end at Mazeri and the Grand Hotel Ushba, to see how the road was and whether the Mountain would continue to reveal itself. Clouds around it really help the dramatic mood, I find, more than a plain blue sky, which can be a bit boring in its featurelessness. Clouds at least let you know that you should count yourself lucky to see the mountain at all. I also find myself converting my color original RAW files to black and white most of the time for this and most landscape work nowadays, and will likely make new monochrome versions of all my old Ushba shots in future too.

It did continue to clear up, and as we drove as far as we intended to, the sharpest view of the day loomed out of the clouds. So we had the best of all worlds in a half-hour time space: from invisibly misted over to well-defined in all its details. The little “fangs” called Babua and Bebia (Grandfather and Grandmother) also stood out well on the left hand side, adding a third dimension.

It is such a privilege for me to live so close to this towering presence. The irony of not being able to see it from our house at all is mitigated by views from five minutes’ walk away, and many other angles, from our own village of Etseri, Pari, various points on the road, Becho, Tskhumari, Latali, Mestia, the Khatsvali and Tetnuldi ski resorts, K’ala and far above Ushguli. I have seen it from all these places, and mostly still lack the view from above Nak’ra, which I’m told will throw in Elbrus, highest peak in the Caucasus, in the same frame as Ushba for free. A balloon ride is still a firm dream, getting my wife and me perhaps closer and to more exotic angles than any other way (except by helicopter, also on my bucket list). Now THAT will be something to write home and here about.