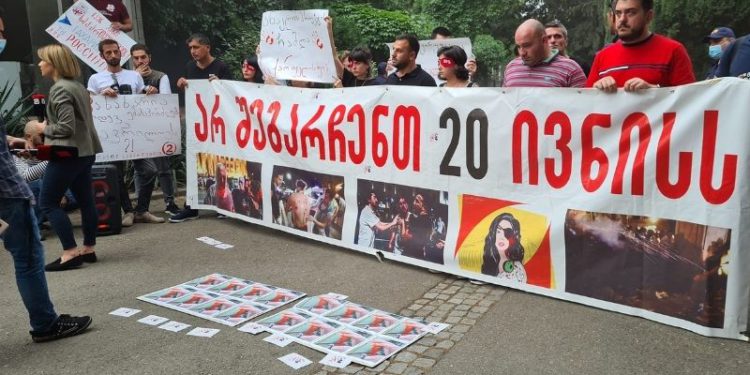 Representatives of the movements ‘For Georgia’ and ‘Shame’  are gathered near the Expo Georgia in Tbilisi, where the presentation of former Prime Minister Giorgi Gakharia’s party is being held today, May 29.

They have placed a banner on the ground with the inscription “We will not forgive you June 20” to highlight the events of June 20, 2019 (so-called Gavrilov’s Night). Gakharia was then Minister of Internal Affairs.

The Movement for Georgia and Change activists claim that Giorgi Gakharia represents Russia in Georgia and “he plays the same games as Bidzina Ivanishvili and the Georgian Dream.”

They say he was the most unsuccessful PM.

The presentation of the political union of the former Prime Minister Giorgi Gakharia ‘For Georgia’ is taking place in the building of ‘Expo Georgia.’

Ana Buchukuri, a member of his team, says during the presentation of the party Gakharia will talk about the future plans of the party. In addition, the party will take part in all political processes, including elections.

The former PM will introduce the team members to the public during the presentation.