A Saving Grace for Mariupol Defenders? 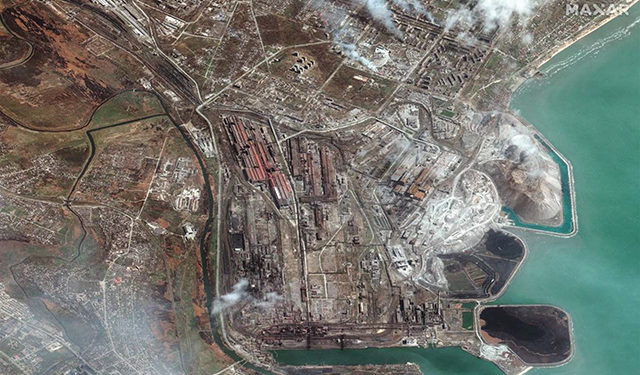 Mazar imagery of mariupol under siege with the “Azovstal” factory in the center. Many estimates put the destruction of the city between 75% to as much as 95%. Source: Maxar Tech/AFP/Getty Images

NOTE: This is a short analysis of a developing story.

A recent statement by Ukraine’s security chief Oleksiy Danilov (via Sky News) has said that there was a night-time helicopter resupply drop to their forces in Mariupol. This is alleged to have brought weapons to the defenders of the embattled “Azovstal” factory.

While the source only cited weaponry, it is highly likely food and water was included, given the length of time the Azovstal defenders have managed to defend the steelworks. For a helicopter to deliver these goods, they likely would have had to fly incredibly low (termed as Nape of the Earth), in an urban environment with an exceptionally dense enemy force presence.

While these factors cast doubt on this and frame it as a propaganda effort, the claim hasn’t had the level of coverage as other notorious propaganda. It almost seems as if this ability is purposefully being kept under wraps so as to leave the opportunity to conduct further drops. Additionally, the identification of the aircraft being a helicopter may even be a misnomer in place of a large drone capable of evading eyesight and anti-air attack.

The ability to funnel arms, ammunition, food, and water is a game changer. It could pose a significant problem for Russian forces attempting to pacify the city, resulting in heavy human and equipment losses. While they have claimed to have captured the city entirely, many opposing reports say that Ukrainian defenders have been able to mount raids and ambush attacks on their foes. A resupply allows this destabilization of the occupation forces to continue, drawing soldiers and resources away from other would-be critical operations for the Russians.

Aside from this alleged daring helicopter mission, the only route for new supplies to be delivered to defenders is through overland smuggling. With approximately 100,000 civilians still trapped in the violence of the city’s bombardment, this could theoretically happen under the guise of families simply helping other civilians. While humanitarian corridors have been opened from time to time, they are frequently hampered by Russian offensives.

These defenders have been completely encircled with virtually little to no meaningful contact or supplies from other units since the early days of the invasion. Many of the Ukrainian Marines also fighting for the city were forced to surrender, citing a severe shortage of ammunition and food stock. It is estimated that between 1,000 to over 2,000 fighters remain in the shattered factory, along with civilians fleeing the Russian fusillade often impacting residential structures.

Several videos, along with a graphic diagram, have been shared on social media of the Ukrainian soldiers displaying living conditions within the underground structure. While Spartan in nature, there does appear to be a reasonably good supply of food, clothing, and water. Built to protect the tens of thousands of steel workers during a Cold War nuclear attack, the six stories have brought some comfort to the tunnel’s and bunker’s new resident.

Above ground, the scene is relative to that of the historically infamous Stalingrad Tractor Plant. Twisted metal, scattered debris, and destroyed military vehicles cover the almost 11 square kilometer property. While Russia continues to launch air and ground strikes against the facility, the defenders have repeatedly refused to surrender from the over 24 kilometers of tunnels underground.

There has been a massive redeployment of Russian forces in the east of Ukraine, and gains have been slow and bloody. As more European and American supplies are en-route to the country, it’s likely both Russia and Ukraine will be locked in a static fight. Similar to the aftermath of the more covert 2014 invasion, each force will likely be forced to dig in to solidify gains. With provocations in Moldova, the Kremlin unlikely to accept a ceasefire, and a massive influx of arms and equipment in Ukraine, it’s unlikely any end is in reasonable sight.