A Circular Economy For Georgia 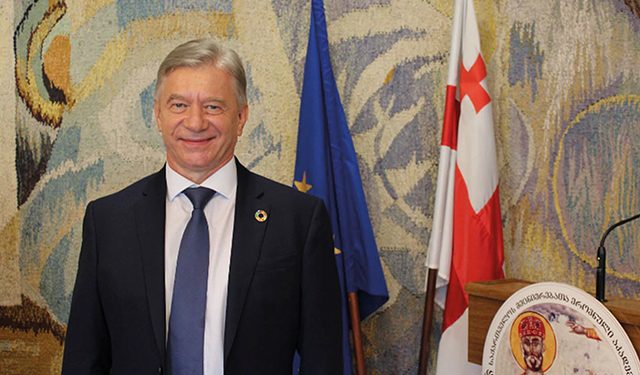 Georgia’s economic recovery since the woes of the global pandemic has taken center stage. With tourism, one of the country’s largest sources of revenue, rocketing back and investment returning to the region, Georgia has been taking a look at a new economic model. A circular economy conference, hosted by the Georgian Society of Nature Explorers “Orchis,” focused on this monumental shift on October 24 in Tbilisi.

The stated goal of the conference was “to facilitate the accelerated transition to the circularity and efficient implementation of this system in Georgia.” Supported by the Government of Sweden, the circular economic model is linked with climate change, and ensures the sustainability of societal and economic ecosystems. As they describe, it is a system of production and consumption, which involves sharing, leasing, reusing, repairing, refurbishing, and recycling existing materials and products as long as possible.

Ultimately, the lifecycle of products and resources is extended and unnecessary waste is either eliminated or reduced. Additionally, it is built in a way that, when implemented correctly, it benefits local and international businesses, Georgian society, and finally the environment. With Georgia gaining quickly on European and Western social responsibility and economic standards, the nation is next in line for this fundamental shift in balancing production and consumption, especially since the movement away from fossil fuels, Russian oil and gas products, and the need to further integrate with modern conservation techniques. To do this, it requires components of the private and public sectors to take action nearly concurrently. Education centers have to change the way they teach their pupils, shaping them to understand their environment in the circular model. Put briefly, “Orchis” says, “the circular economy is not the responsibility of a chosen few.”

Dr. Dariusz Edward Prasek, an International Expert in sustainable finance, environmental, social and governance areas and Circular Economy, and a member of the United Nations Advisory Board on Circular Economy, spoke to the attendees of the conference. In addition to sharing the fundamentals of what the circular economy is and how it works, he offered real-world examples on how this model revolutionizes the way we work, live, and develop as an interconnected global society.

Dr. Prasek asserts that the movement away from the “take-make-waste linear model” must allow for a decoupling from the consumption of finite resources. The regenerative nature of the circular economy, he states, is intimately linked with the world’s efforts to address climate change. Renewable energy is only responsible for tackling approximately 30% of emissions, while the remaining 70% come from the way we use and handle those resources.

As a result of this majority, it is a concerted effort by the country at all levels. Local and federal governments, businesses, innovators, academia, investors, and consumers have to make changes to affect the shift needed. This shift has already begun, he stated, noting that the Georgian Government already implemented a regulatory framework that assists with this movement.

Much of this change has taken place in Georgia’s agribusiness industry, one of the largest sectors in the country next to tourism. The country has taken surprisingly large steps towards the circular economy, it seems. When looking at the larger region, Georgia is leaps ahead of its South Caucasian neighbors, particularly with the models in Europe’s most advanced nations. Finland, Sweden, and the Netherlands are currently leading the move to the new model, setting a prime example for Tbilisi to follow.

Bringing in smaller and medium size businesses will likely challenge the proponents of this model the most. With deep-rooted connections to Dr. Prasek’s aforementioned “take-make-waste” model of consumption, the mission of educating business leaders and affecting the paradigm shift across all industries is not accomplished quickly. Given that even Europe’s most advanced economies are twenty to thirty years into the shift, Georgia still has a long way to go. Dr. Prasek also indicates that while this change is immense, it is also advantageous for these businesses with financial incentives, tax breaks, and advisory and consulting resources increasingly available.

The circular model has the potential to advance Georgia not only into greater harmony with its European partners, but also establish a more sustainable, viable, and secure industrial and economic situation for the country. The Georgian Society of Nature Explorers “Orchis,” with the expressed support of the Government of Sweden, and in concert with the Georgian government, has worked exhaustively to raise awareness about circular economy benefits. Staying true to their stated mission, “Orchis” has set out “to protect the environment and involvement in elaboration and implementation of environmental protection measures to create a better and safer environment for society.”