Garibashvili Assesses his Visit to Azerbaijan as Fruitful 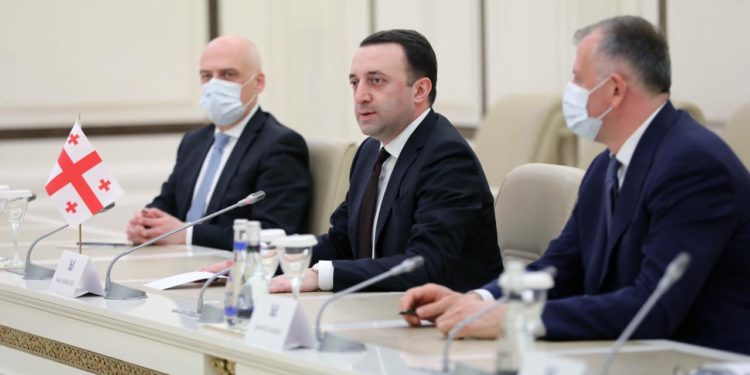 The Prime Minister of Georgia, Irakli Garibashvili ended his visit to Azerbaijan and summed up his meetings as “fruitful.”

The first meeting of the official visit was held with the President of Azerbaijan, Ilham Aliyev, which took place in the Zagulba Presidential Palace in Baku. Garibashvili also met with the Primer Minister of Azerbaijan, Ali Asadov, and Sahiba Gafarova, Deputy and Chairman of the National Assembly of Azerbaijan.

“First of all, I want to say that I had a very fruitful meeting with President Aliyev. We discussed a number of issues, including the issues of strategic partnership between the two countries. As you know, we have many years of history of very fruitful cooperation and we are motivated to carry out even more projects together. We also discussed the situation in the region, including security issues, touched on virtually every issue between the two countries, including the issue of David Gareji, and agreed that the dialogue would continue, accelerate, and be resolved very soon as befits our brotherhood, friendship. The commissions will continue to work very soon and more specifically will be announced later,” the Prime Minister said.

During the meeting with the Speaker of the Parliament, the Prime Minister discussed economic issues, how to intensify work on investments.

Garibashvili thanked the President of Azerbaijan and the government for the warm welcome.

“We have implemented important projects together. Therefore, we intend to continue as well to implement more projects together, which will further strengthen our relations. I once again thank President Aliyev for receiving our official delegation in Baku and I will be glad to host him in Tbilisi,” Garibashvili said.