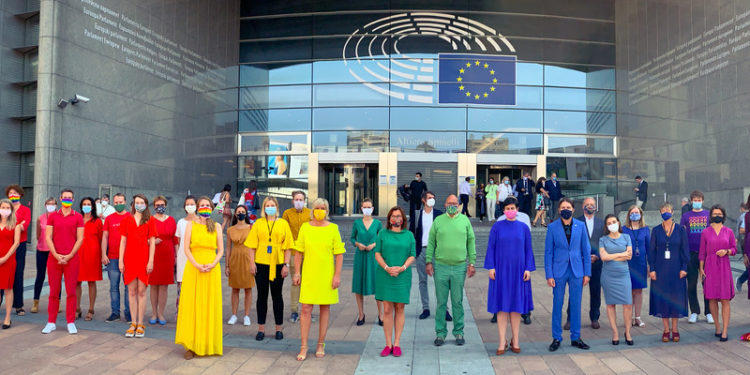 28 members of the European Parliament have called on the Minister of Internal Affairs of Georgia Vakhtang Gomelauri to protect the freedom of expression and security of “Tbilisi Pride.”

The MEPs wrote a letter to Gomelauri on 28 June; the addressees, along with Gomelauri, are EU Ambassador Carl Hartzell, and Josep Borrell, High Representative for Foreign Affairs and Security Policy.

On July 5, ‘Tbilisi Pride’ will hold a ‘March of Honor’ on the central Rustaveli Avenue in Tbilisi.

The slogan of the ‘March of Honor’ will be ‘Come out for solidarity.’

In addition, ‘Tbilisi Pride’ will organize a documentary film screening and a music festival during Pride Week.

MEPs write that the recent comment of Irakli Kobakhidze, the Chairman of the ruling Georgian Dream party, when he said that in his opinion the march of dignity should not take place, is against universal human rights.

“Between 1-5 July, Tbilisi will see its Pride March celebrations take place. These will include 3 main activities throughout the five days, including the official premiere of “March for Dignity”, a documentary about the first-ever Tbilisi Pride Week in 2019 (1 July), the Pride Fest with local and international artists (3 July) and the Pride “March for Dignity”, co-organized by local social movements (5 July). Collectively, these will constitute a major event where the diversity of the LGBTI community is celebrated and affirmed.

“Pride demonstrations are peaceful tools for political advocacy and one way in which the universal right to freedom of expression and peaceful assembly is crystallized. They are a hallmark of the LGBTI activist movement, a pillar for social visibility and they are equally political demonstrations during which the community voices its concerns, highlights its achievements and gives the opportunity to its members to demonstrate in favor of equality.  As such, the recent comments of the Chair of the Ruling Georgian Dream Party, Irakli Kobakhidze, who said that the Pride March had to be cancelled, are in contravention of these universal rights and of the established precedent in Tbilisi.

“It is thus in this spirit of support that we address you, Minister, in order to ask not only that the Pride is, in line with the universal right of peaceful assembly and freedom of expression, effectively allowed, but also that all the preparations be taken so as to ensure the effective enjoyment of the manifestants’ right to freedom of expression and peaceful assembly, all the while availing themselves of authorities’ protection,” reads the letter.