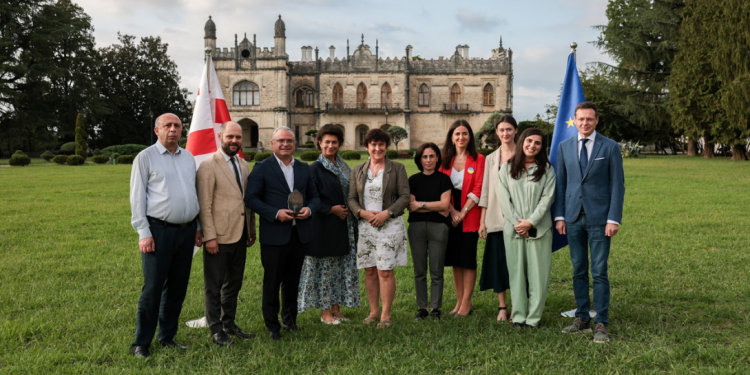 The official awarding ceremony was held on September 19 in Zugdidi, in the State Historical-Architectural Museum of the Dadiani Palace. The event was attended by representatives of the EU delegation in Georgia, the mayor of Zugdidi and the employees of the EU4Culture project.

“We are glad that, with the support of the European Union, for the first time, the city of the region, Zugdidi, will implement the culture development strategy. The city of Zugdidi has been given a unique opportunity to increase the awareness of Zugdidi, at the regional and international level, and to activate the cultural ecosystem, which will contribute to the economic development of the city,” noted Katalin German, the Deputy Head of the Program Department of the European Union Delegation in Georgia.

The 5-year culture development strategy of Zugdidi reflects the city’s main cultural topics, priorities, goals, opportunities and perspectives for 2022-2026. The city has outlined the following main strategic directions: Zugdidi as a creative city of cultural heritage, innovation, crafts and gastronomy.

“Maintenance of cultural heritage and systematic development of modern art is the most important priority of the city and a prerequisite for the well-being of the local community,” said Mamuka Tsotsoria, the mayor of Zugdidi municipality. He noted that the process of developing the document itself is no less important, in which local target and professional groups, public and private cultural institutions, independent artists, non-governmental organizations, individual entrepreneurs and other interested persons were involved.

Thanks to their active involvement, an open and transparent discussion took place on the city’s cultural needs and challenges, priority tasks, and short- and long-term cultural development goals.

EU4Culture is a project funded by the European Union, the goal of which is to increase the role of culture and creative industry in the process of economic and social development of the country. The project is implemented by the Goethe Institute (leading partner), the Danish Institute of Culture, the Czech Centers and the French Institute of Georgia.