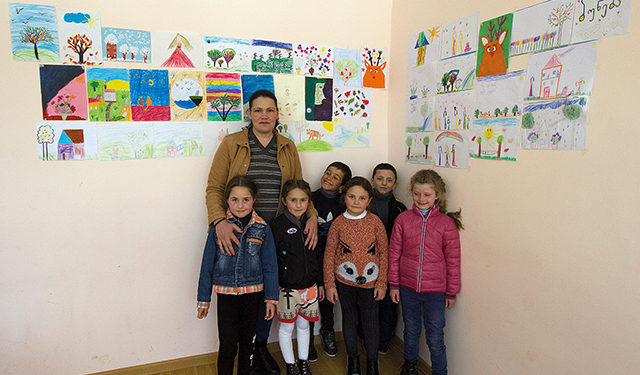 It does me glad to see art being done in grade 1. This was my favorite subject in school (well, tying with English), right until the end, crowding out Math to the point that I barely passed the latter subject. It would be some years that art would redeem math when they fused for me in fractal exploration. But back to Etseri Public school…

Grade 1 had put on an exhibition of its best work of the year so far, with three outstanding artists chosen: 1st – Marian Kvitsiani, 2nd – Sopo Pakeliani, 3rd – Nia Khorguani, taught by Eliza Gerliani. Most of the class of nine were still there when I went a couple of days ago to take photos, see the work and encourage the youngsters. They are already full of enthusiasm, but were suitably impressed to hear that my weekly article featuring them would be printed in a few thousand copies AND visible all around the world online.

Plenty of color and creativity were on display in the works in crayon, paint and collage, and who knows where some of these children will end up? I told one boy that his crocodiles had been a part of my life when I lived in Zimbabwe at his age. Occasionally a neighbor would discover one of the monsters in their swimming pool. I had even had to overcome a natural terror of swimming in Canadian lakes as a 10-year-old, due to early fears of crocs and hippos lying in wait: the former as a carnivore to actually eat one, the latter a herbivore only to kill and abandon.

If a Picasso or Leonardo are waiting here for their turn to pounce on the world and dazzle it, only time will tell. This I do know: Svaneti has produced some outstanding artists in various fields over the centuries. Graphics, painting, calligraphy, woodcarving, music, singing and writing all immediately come to mind. The writing, in Svan, will save the language from the extinction which currently threatens it.

There is no lack of natural beauty available for inspiration here, in any season. Although we are currently still far too deep in snow for anyone’s liking, after freakish January rains and very unfortunate early budding, each part of the year offers its own delights, in both landscapes and towers. It’s all about seeing beauty anywhere, which I hope these children grow up learning. What they see is familiar because they have seen it from birth, whereas it’s much more exotic for me. But finding inspiration wherever you look, in the new or the old, is much of the battle of being an artist.

I don’t think that they can force themselves to copy anyone else’s style for long, although this may work as a stimulus at the start. Eventually what each person wants to depict will emerge by itself, in any medium, be it visual arts, writing, music or whatever. You just be you, don’t force anything. You can’t successfully do this anyway, unless your actual art is mimicry. Be original.

Is it too early to tell them this? I have always wanted to be not only an artist but a patron of other artists, a collector and supporter of their early work. Not just for the sake of saying, “I knew and collected N when she was just starting school,” but for the joy it brings at seeing development over years, decades. I seek, and hope to find, natural gifts which, encouraged, will emerge and flourish however and wherever their possessor ends up. A talent, after all, is not meant to be buried to keep it safe, earning its keeper only scorn and condemnation, but invested to see it grow and multiply into its full potential. A seed which, starting out almost too small to see, can grow into a whole tree lasting for centuries or millennia.

Are they budding yet? Let’s watch, add water and sunlight, get out of the way, and see what we will see.