Yes, We Have Baseball in Georgia! 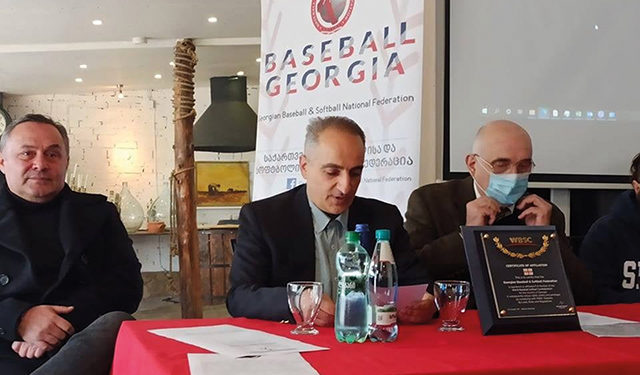 How many of us knew that Sakartvelo has a National Federation of Baseball? Not many, of course! And we don’t only have a functioning federation but we also, believe it or not, enjoy a certain amount of success in this most popular American sport.

Baseball crossed our frontiers about 30 years ago, right at the dawn of the post-soviet era, which was marked with amazing innovations in the nation’s cultural life. Ramaz Goglidze started it all, a good, wise man loaded with an unbelievable amount of prestigious titles in almost every walk of life, including the presidency of the Georgian National Federation of Baseball & Softball. He was the man who invented Georgian Baseball, and managed to do so thanks to his organic ties with the USA. Incidentally, the Georgian-American strategic partnership did not fall on us like manna from heaven: our political affiliation is built on many precious details, gradually accumulated over many long years through the deliberate efforts of talented and farsighted men and women on both sides who, several decades ago, premeditated the outcome we are enjoying today. Ramaz Goglidze is definitely one of them: he would frequent America more often than his own backyard.

The other day, we all stood in a minute of silence in his honor and memory, participants in the congress dedicated to the election of a new president of the Federation. Everybody’s darling Ramaz should have been there, but alas! However, Gela Chikhradze stood in for him, Goglidze’s strongest and the most faithful comrade-in-arms, himself the pathfinder and founder of baseball culture in this land. He said he was badly bereft by the former president’s recent demise, but he also sounded extremely optimistic about the future of this amazing sport in Georgia.

Gela mediated the congress in his masterful and benevolent manner. The former secretary general of the federation, Giorgi Datunashvili, was elected president, unanimously and enthusiastically applauded by the delegates and the freshly elected executive committee. Most welcome to the committee were new foreign members: two successful businessmen, having to do with the Georgian economic development, first vice-president of the Federation Ben Graubard and member of the executive committee, Andrew Allan Thornhill.

Isn’t it fascinating that we now have two wonderful gentlemen on the committee, one from Israel and the other from the US, ready to throw their considerable say and power into the lofty cause of developing the still-fragile baseball tradition in this country? But the hopes are strong and solid, and not without reason!

Two vice-presidents Levan Charelashvili and Otar Tavkelashvili were also elected, well-equipped with their baseball experience in past and future business potential. And finally, the brilliant Sophio Khidasheli emerged as the new secretary general of the Federation, well-versed in PR technology and mass communication.

A report on past baseball dealings and upcoming prospects was made by the new president, supported by his mighty predecessor Davit Khrikadze. If we look into the details of the federation’s report, the past several years were not so bleak and trivial. Just the contrary: the successful activity of Georgia’s national baseball team looks quite promising, but the girls’ softball still leaves a lot to desire, and is asking for more resources and stronger assistance.

Georgian Softball is now in the caring hands of Ketevan Nikoleishvili, who was once a successful player herself, thrilling the viewers with her style and dexterity. Keti is being supported like a rock by the all-time and irreplaceable baseball coach Nugzar Kapanadze. The event took place on the February 14, a happy coincidence with the Saint Valentine’s Day, at the beautiful venue of the Museum of Georgian Gastronomic Culture, in Tbilisi. The congress was hosted personally and totally at the expense of the founder, owner and director of the museum, Esma Kunchulia, with her habitual sense of hospitality and outstanding Georgian cuisine. Definitely, the refreshments looked and sounded very symbolic in terms of the future of baseball, softball and baseball in Georgia, because these three beautiful ways and means of recreation certainly need refreshment and reinvigoration in order to have a desired effect on the lives of our youth!