Witnessing the Fall of the USSR 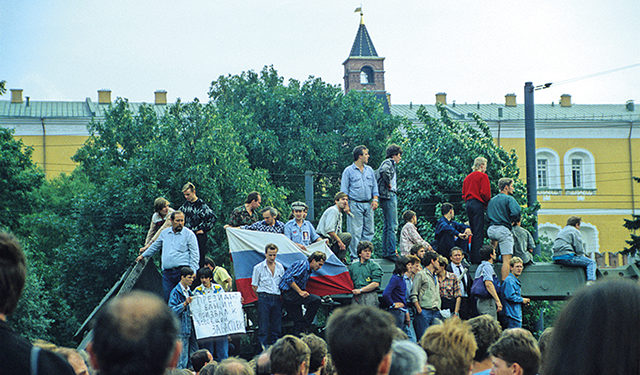 The USSR. Remember that? My wife lived half her life during it. I managed a single visit to the Soviet Union before the fall, and happened to be there at the beginning of the end.

Some friends and I visited Moscow in summer 1991. We didn’t have money to travel around the country, and were staying on the edge of the city with a Russian family. Some impressions:

Hare Krishnas chanting in Sheremetyevo Airport. African refugees squatting there too. Having flown in from Budapest, which had had its revolution already and was starting to westernize, this place in comparison really seemed to be waiting for change. My last visit to Moscow, in 2006, made it seem like the West when put next to Tbilisi. The greyness, the lack of food in the shops. Quiet desperation. The magnificence of St Basil’s Cathedral in Red Square, a fantasy of swirling colour spirals. Lenin in his tomb, the whole thing like a descent into a modern pyramid, complete with an aura of soundless “awe”. His hands and ears—surely not real! The concrete jungle of apartment blocks in this huge city. The somberness of people’s public faces, then their deep friendliness when you got to know them at home.

Great Russian Soul. My first taste of Soviet vanilla ice cream in those “stakanchiki” (integral cones), on a hot day when we needed it most—so creamily delicious! Solzhenitsyn, whose writings had inspired me to go to the USSR in the first place, peering over my shoulder from his American exile and warning me to remember the Gulag Archipelago, not yet sunk. Daring to take a single photograph of the ominous Big Lubyanka, which I found—thanks again to Aleksandr Isayevich—next to a huge toy shop. The speed of the Metro, unparalleled and so efficient for getting across the city, though best avoided at Chas Pik (Rush Hour). The feeling of being under something heavy, yet revelling in the strangeness of it all, privilege of seeing and experiencing it as was. Needing to be shepherded around lest we get lost, not knowing a word of Russian. 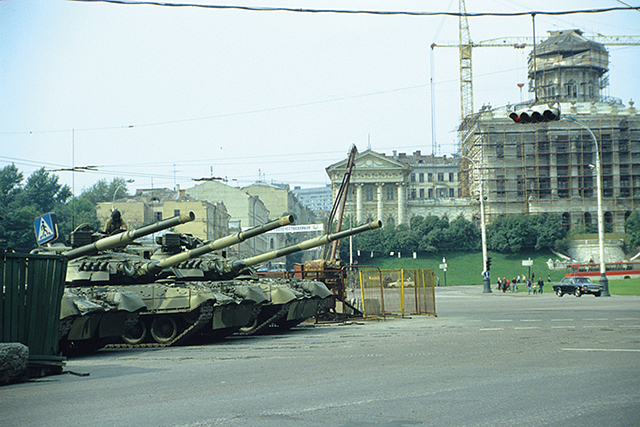 I had left Canada in late December 1989, and was staying with relatives in England when the Romanian Revolution erupted. Christmas Day, the world watching the executions of Ceaucescu and his wife, live on TV. Surreal. The machine guns cut them down while they were speaking, not so much pleading as simply protesting the audacity of it all. Then the rest of the Eastern Bloc came tumbling down, one country after another abandoning what Moscow had forced upon them. But we had not dared to imagine that it could happen in the USSR, Communism’s Ground Zero, as soon as it did. Nor could we fathom the changes to come in the world from then until now. Who could?

August 19th was our month’s second-last day in the great old capital. That afternoon, I had taken the Metro towards the center of Moscow, alone for once, to finish off my last roll of film before we left. I got more than I bargained for.

Crowds of people outside Red Square, itself blocked from public entry on all sides by buses. Tanks at various locations near the Square as well. Some people listening to those addressing them through megaphones, perched on top of whatever could give them some height advantage, especially any kind of vehicle. For the first time, I was seeing not the USSR’s gold hammer/sickle on its red background, but other flags which I didn’t recognize: Russia’s tricolour, those of the other Union Republics. I couldn’t follow any of the Russian, but another foreigner told me the gossip—Gorbachev taken ill in his Black Sea dacha, hard-liners taking over, sick of his attempted reforms to their precious pure communism. He said to take care where I was shooting. But others there were also photographing. I knew it was history, and that I’d better take my chances, not miss the moment, even though news reportage has never been my strongest genre to shoot. I continued, remembering but having to ignore the video cameras mounted on poles turning silently this way and that, Big Brother watching us as we recorded. 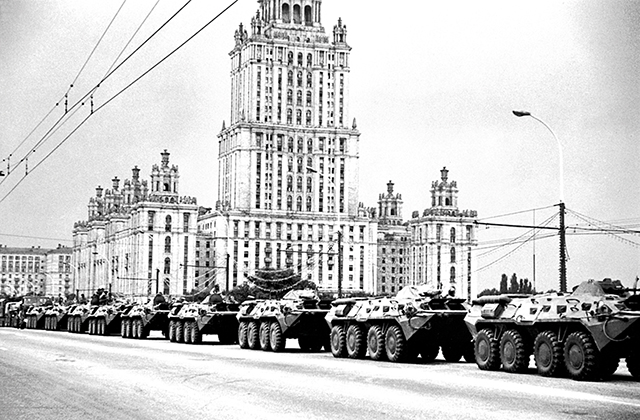 Instead of needing to finish that film, I now needed to buy more, which I was able somehow to do in a nearby shop. Just one more roll was all I had money for.

Outside Manezh Square, some people were standing atop a trolleybus which they had removed from its overhead wires. Great vantage point, and also a useful place from which to speak. How I wish now that I understood Russian then! Others were arguing with the tank commanders who, unknown to me, were caught between following orders—disperse this mess however you have to—and avoiding a bloodbath. Mercifully, they took the latter path at last, or it could have been horrendous. There were only a handful of deaths recorded in all, accidental. It could have been so much worse.

Someone running through the crowds distributing leaflets as he went, or rather letting people grab them out of his hands. I acquired one—a photocopied communiqué from above, from the coup’s engineers.

I followed the crowds for a while, to stay with the action. No idea where we were headed, but our goal as it happened was the so-called Russian White House, where someone had unrolled a huge Russian flag to cheers Yeltsin.

Somehow, I managed a call to our host family from a pay phone (no mobile phones in those days!), and told my friends what was happening. They found me early that evening, as the light was failing and my ability to take any more photographs was ending, with no flash. We spent a bit more time together there, then went home for our last evening in the Soviet Union, full of questions and uncertainties.

The next morning, August 20th, all was too calm. We flew out to Budapest on schedule. I had nine rolls of film from our month in my trouser pockets, and was ready to do whatever I could not to have them x-rayed or taken away at Sheremetyevo Airport. Neither happened, and I felt like my pockets were full of gold. They were handing out copies of yesterday’s Pravda on the plane… the last one went to the person sitting next to me. Fool for not being bold enough to beg a copy of that historic edition from anyone! 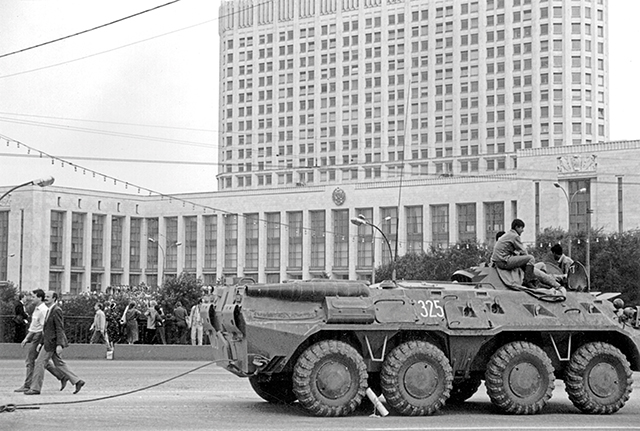 Budapest after austere Moscow was the West.

August 21st: we were with other friends in rural Austria discussing the events when the phone rang. News: It was over! Yeltsin had saved the day! Hard-line communism had lost! Euphoria the world over, especially in the USA: too soon, blissfully ignorant of what was coming.

A week or so later I had my film developed in the UK, and ten sets of prints made from the main black and white roll of the coup. Those, and a few colour slides, were my record of that fateful day. My photographic mentor made a few prints by hand for me in his darkroom as well. Several frames appeared in a local paper, with a brief story.

For months, back in Canada, I was obsessed with collecting all local newspaper stories of the new order emerging in the soon to be FORMER USSR. This entity indeed by order of Gorbachev ceased to exist on December 25th, 1991, along with his own job. The 15 Union Republics automatically became sovereign states; subunits with a big grudge like Chechnya were less successful, and chaos flourished alongside a few simultaneous wars and the growing hyperinflation. The sowing was over, but the reaping must follow.

I returned to Russia to live, in Petersburg, September 1992, where I based myself until mid-1999. It was there during ethnographic studies that I first discovered the other peoples of the former Soviet Union… and the Caucasus… and the Svans, whose description was exactly the reason I found myself itching to visit Georgia. Then I moved first to Baku and then to Tbilisi, with 4 days in Svaneti part of the package. Early on in those Russian years, my precious coup 35mm film rolls—and many others, all of course irreplaceable—were stolen from my Petersburg apartment, leaving me with only the prints which I had had made, and the handful of slides.