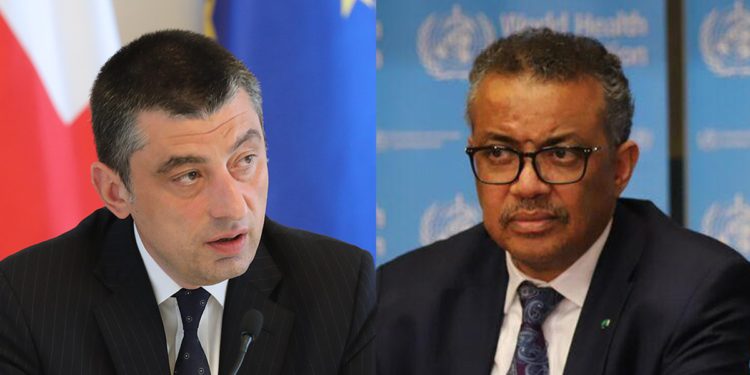 The main topics of discussion were the current situation of the global pandemic, effective efforts made by the Government of Georgia in the fight with the epidemic and WHO support to Georgia in the timely launch of COVID vaccination in the country.

WHO Director-General praised the preventive steps made by the Georgian authorities during the first phase of the epidemic, as well as the response measures taken during the second wave by curbing a further spread and management of treatment for the contracting individuals.

The focus was made on the current situation in the hospital sector, role of clinical hotels and the performance of the primary healthcare segment in the treatment of light patients at home. The significance of the intensive testing program was also noted in the timely identification and isolation of contracting individuals and in curbing the community transfer rate.

Phone conversation also related to the launch of the COVID vaccination process throughout the world and the performance of the Special Commission established under the instructions of the Prime Minister of Georgia, which is actively working on the timely supply of vials to Georgia and on addressing all the related infrastructure and logistical issues. It was once again stressed that apart from the COVAX platform, negotiations are actively progressing with international partners and pharmaceutical companies with the engagement of the Ministry of Foreign Affairs of Georgia and overseas diplomatic missions of the country on behalf of the State. WHO Director-General noted that WHO stands ready to support Georgia in getting the vaccine to make sure that first dozes are received as early as possible.

It was noted that the successful cooperation of Georgia and WHO is again evidenced by the visit of the WHO Regional Director for Europe last week.

The Prime Minister noted that Georgia will continue its close partnership with the WHO, both within the scope of COVID-19 management, as well as in the implementation of future reforms in the healthcare system of the country.