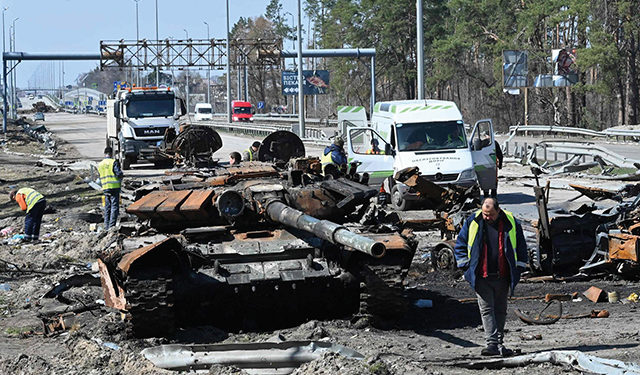 Ukrainian authorities expect a strong Russian offensive in the eastern Luhansk and Donetsk regions, with Russia lining up more firepower ahead of a potential showdown in eastern Ukraine that could start within days.

Moscow is refocusing its military offensive on Donbas, which comprises Ukraine’s regions of Luhansk and Donetsk, after facing stiff resistance and battlefield setbacks in other parts of the country, including around Kyiv.

Russian President Vladimir Putin controversially recognized the independence of the Luhansk and Donetsk regions, naming them “historical Russian lands,” just days before launched his invasion of Ukraine on February 24.

The major events that marked the seventh week of the war in Ukraine include:

April 7
Ukrainian authorities say Russia fired a cluster munition into a railway station packed with thousands of evacuees, killing at least 52 people. The attack took place in the city of Kramatorsk in the eastern Donetsk region.

Some NATO members said they will step up deliveries of weapons to Ukraine, during a foreign ministers’ meeting in Brussels. Ukrainian Foreign Minister Dmytro Kuleba told the gathering that Ukraine needs the extra weapons in “days, not weeks”.

The United Nations General Assembly voted to suspend Russia from the organization’s Human Rights Council. Ninety-three nations voted in favor of suspension, 24 voted against, and 58 abstained.

April 8
Ukraine said it had repelled Russian attacks in the east of the country, destroying nine tanks, seven armored vehicles and two helicopters.

Forensic experts started exhuming bodies from mass graves in the town of Bucha, northwest of Kyiv.

The European Union banned imports of Russian coal in reaction to Russia’s apparent slaughter of civilians in Bucha. The ban, which begins in August, will deprive Russia of 8 billion Euros (around $8.7bn) in revenue annually.

As part of this fifth round of sanctions against Moscow, the EU also banned imports of Russian lumber, cement, seafood and fertilizers.

Russian-flagged ships are also banned from the EU’s ports, and Russian-registered transport vehicles from its roads. The Russian customs service noted that some of its vehicles were barred from entering EU territory on the same day.

The EU also banned the export to Russia of jet fuel and sensitive technologies and software.

Von der Leyen says the EU is looking into blocking imports of Russian oil next.

“Ukraine can never be bullied again, never will be blackmailed again, will never be threatened in the same way again,” Johnson said.

Zelensky also met with Austrian Chancellor Karl Nehammer in Kyiv, and warned that a difficult battle lies ahead.

“This will be a hard battle. We believe in this fight and our victory. We are ready to simultaneously fight and look for diplomatic ways to put an end to this war,” Zelensky said.

April 10
Russian missiles struck the airport in the city of Dnipro, destroying it, the regional governor reported.

Local officials said they discovered a new mass grave in Buzova, a town 30km west of Kyiv, following the withdrawal of Russian forces.

The Institute for the Study of War, a think-tank, says Russian forces have bisected Mariupol, splitting its Ukrainian defenders into two groups. One group is now in the Azovstal steel plant in the east, and another in the main port in the southwest.

The World Bank reported the economies of Europe and Central Asia will contract by 4.1% this year due to the war in Ukraine, a recession twice as deep as that caused by Covid-19 in 2020.

April 11
Ukraine’s defense ministry says Russia has completed its build-up of forces in the eastern Donetsk and Luhansk regions, of which Mariupol is a part.

“We forecast that active combat will begin in these areas soon,” Defense Ministry Spokesman Oleksandr Motuzyanyk said, adding that Ukraine’s army was ready to face the renewed assault.

Russia said its air strikes have destroyed four S-300 anti-air missile launch vehicles stationed on the outskirts of the city of Dnipro.

Austrian Chancellor Nehammer said he has “no optimistic information to bring” after meeting with Putin in Moscow.

April 12
The Russian missile cruiser Moskva was set aflame and evacuated after suffering a Ukrainian missile attack in the Black Sea, according to Ukrainian authorities.

Russian State Media service TASS, quoting the Russian Ministry of Defense, confirmed the ship caught fire after being “seriously damaged” and that the entire crew had been evacuated.

US President Joe Biden announced another $800 million in weaponry for Ukraine on Wednesday, following an hour-long phone call with President Zelensky. Biden said the new weapons package will include systems already deployed to the fight, as well as new artillery weapons, artillery rounds, armored personnel carriers and helicopters.

April 13
A report from the Organization for Security and Co-operation in Europe said Russia has committed human rights abuses and broken international humanitarian law during its invasion.

US Secretary of Defense Lloyd Austin on Wednesday night revealed details about the latest military aid package the US will send to Ukraine, which includes 300 armored vehicles, artillery and anti-chemical protective equipment. A post on his official Twitter account listed 200 M113 armored personnel carriers and 100 other armored, wheeled vehicles. Among the newer weapons in the package are 500 Javelin missiles and 300 Switchblade attack drones. Ukrainian defenders have used the Javelin and other shoulder-launched weapons to devastating effect against Russian tanks and other vehicles.

The presidents of Poland, Lithuania, Latvia and Estonia visited Ukraine on Wednesday and underscored their support for the embattled country. They traveled by train to the Ukrainian capital, Kyiv, to meet Ukrainian leader Volodymyr Zelensky, and visited Borodyanka, one of the towns near Kyiv where evidence of atrocities was found after Russian troops withdrew to focus on the east of the country.

“The fight for Europe’s future is happening here,” Lithuanian President Gitanas Nauseda said, calling for tougher sanctions, including on Russia’s oil and gas shipments and all the country’s banks.

April 14
Prosecutor of the International Criminal Court, Britain’s Karim Khan, visited a mass grave in Bucha, on the outskirts of Kyiv. Bucha is now synonymous with scores of atrocities against civilians discovered in areas abandoned by Russian forces.

The United Nations High Commissioner for Refugees said it has been “made aware of increasing reports of Ukrainian women feeling at risk” from sponsors in a British program called Homes for Ukraine.

The agency warned in a statement that it was concerned about potential UK hosts turning out to be a “potential threat to the safety of the refugee.”

The calls for more oversight of the British program come as the United Nations brings to light more than 3,200 verified cases of rape and other conflict-related sexual violence crimes amid the new war in Ukraine.

“Every new wave of warfare brings with it a rising tide of human tragedy, including new waves of war’s oldest, most silenced, and least-condemned crime,” said Pramila Patten, special representative of the secretary-general on sexual violence in conflict, before the UN Security Council.