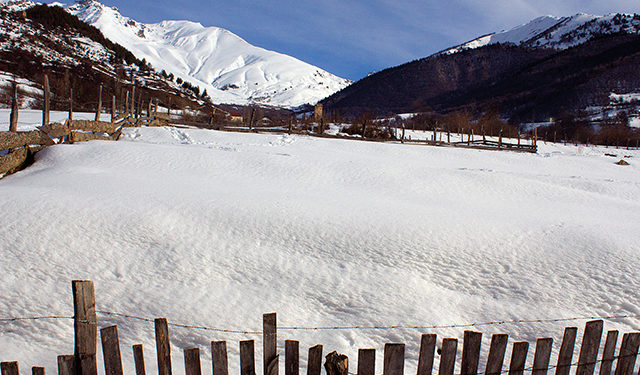 What could be more entertaining? Watching paint dry, perhaps. But there is more to this than the few seconds of attention span would suggest. Especially when it is happening in January instead of in March.
I suppose that several of my attributes lead to being able to observe snow as it melts. These might include patience, introversion, a preoccupation with mathematically defined chaos as a force of nature, and some artistic bent. Extra time at home due to The Virus doesn’t hurt either, leading to a keener focus on what is happening through my house’s many windows on all four sides, or in the yard and immediate neighborhood.
Case in point, the scene in this photo. The foreground is what interests me most, currently. That expanse of snow actually curves downwards towards the bottom of the frame, which is possibly not so obvious from this angle of view. It ends up being nearly vertical on the far side of the fence, having started from an angle only a few degrees off horizontal, a gentle slope.
Nights are still a few degrees below freezing here at the moment; but this is a far cry from the -15 or -20 degrees we normally expect for at least part of winter’s coldest period in Etseri. Days, especially when sunny, take us quite far above freezing, leading to a softening of the snow and ice which had re-frozen quite hard the night before. The road turns to rivulets of melt, which I do my best to divert to the nearby small river with pickaxe and shovel so that they don’t erode the driving surface into actual gullies half a meter deep.
This curving wall of snow, as it softens in the sun, can only slump as gravity calls out to it. The perfectly smooth surface of it (at least on human eye scales) gives way to something altogether more complexly textured. The irregularities it can only possess are magnified as myriad tiny, slightly thinner parts sublimate straight from frozen to gaseous, disappearing into the air. The support they added to the whole vanishes, and all it can do in response is fall, also in uncountably many pieces. Wrinkles grow.
Eventually the thinnest part is gone, and the dark grassed ground underneath it is exposed in bigger pieces. These soaks up much more sunlight than they reflect, getting considerably warmer than the much more reflective snow around them, accelerating the process. Holes appear, not to be replaced by the frost of the night. The next day they grow larger and increase in number too, and the end of is process is a field devoid of snow altogether. The transformation is complete.
It might take days, and suffer reverses as more snow falls, but its fate is certain (unless a new Ice Age arrives unannounced). Winter will surrender to spring, and all this snow, not so much of it so far this mild season, will either evaporate or melt and replenish the catastrophically low (in my 21 years’ experience) Enguri hydroelectric dam to which all local rivers tiny and great flow. This lake does go greatly down in level every winter, as electrical load to our thousands of heaters rises and the inflow is minimal. Then, from late summer through fall, this is all, or most, replaced with the smaller load and greater inflow from all that snow melting and rushing in.
But it starts here, at my featureless few meters of curving white wall, being built up by numerous snowfalls, then melting and slowly collapsing into a marvelously complicated surface before disappearing. This is what I have seen, as I look out the window these days.