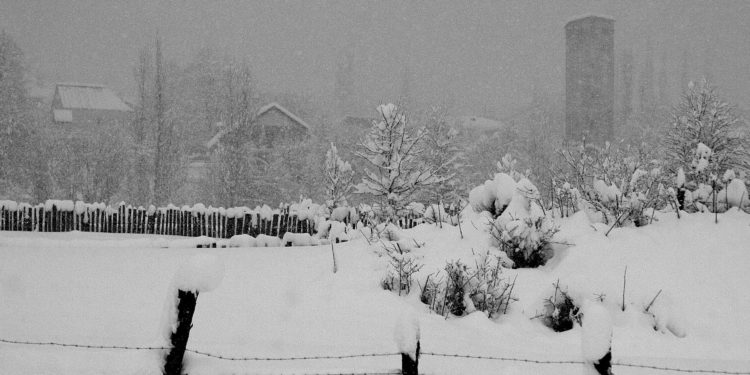 “The disastrous winter of early 1987 is seared freezingly into the minds of all who are old enough to remember it.”

I’m writing this some days earlier than necessary, unsure of how electricity and internet connection will be for a while. Heavy snow can affect them and, in contrast to the weather of last week’s article, though not by surprise, it’s snowing dinosaurs out there, forget the canids and felines.

Those of us with smooth corrugated metal roofs are watching the snow slide off with great relief. It builds up, in these mild temperatures, until the pressure of its own weight melts the undermost layer. Then gravity and the slope of the roof take over. The effect for us, in our big two-story house, is one of continuous white-shrouded bodies being tossed off the roof with a whoosh and a whump, as I have written before: the mafia’s busy up there!

For those with painted roofs, however, the story is quite the opposite. The snow simply sticks and refuses to slide. Enough so that usually several times a winter, the owners, or kind neighbors, are forced to ascend with shovels and move the stuff by hand. An hours-long process with multiple helpers. The alternative is evident in some of the abandoned houses in our village and elsewhere. A single winter without such attention can bring the roof down under its multi-ton weight of soft, fluffy but inexorable snow. Then the weather has free access to the entire rest of the house, suddenly exposed, and ruinous decay comes in. Rust, mildew, rot, the end writ large if slow. So much easier to prevent than to cure!

The disastrous winter of early 1987 is seared freezingly into the minds of all who are old enough to remember it. Across Georgia there were floods from the rain; but in the mountains, avalanches. A whole hamlet of Ushguli was damaged and virtually abandoned, roofless to this day. The village was only saved from becoming a ghost town altogether by its then mayor and surgeon, who refused to leave, galvanizing the community into sticking it out and turning its fate: Anzor Ratiani, lionized still for his courage.

I am sure that some of our neighbors are thinking back now, as the snow continues to fall thickly and will do so for at least another day: what if…? Here in Etseri, you could walk out the 2nd floor windows of the house we bought onto snow. Roof-clearing crews slaved away in 8-hour brigades day and night as the snow came for about three weeks non-stop. Opening doors in the morning, you were greeted with a white wall from floor up, the only way out to tunnel, if you were lucky enough to have a shovel indoors. Livestock was similarly locked into its barns, unreachable except by heroic feat. Power was out, of course; there were no cell phones then, and landlines were similarly cut by the weather. It’s hard to imagine without going through it, which God forbid.

Nowadays we do have forecasts (usually as right as mountain weather’s vagaries allow) to help us prepare. The whole situation is different, and what happened then was a once-per-century Perfect Storm, thankfully. But, although the mathematically chaotic nature of weather makes such disasters rare, their regularity is only statistical! Again, God forbid. At least we are much more forewarned now, which makes a huge difference in also being forearmed and in being able to make informed decisions. For now, we will just expect it to pass, help out the neediest neighbors on their roofs if necessary, and breathe a sigh of relief when spring comes.