Was the USSR Really That Evil? 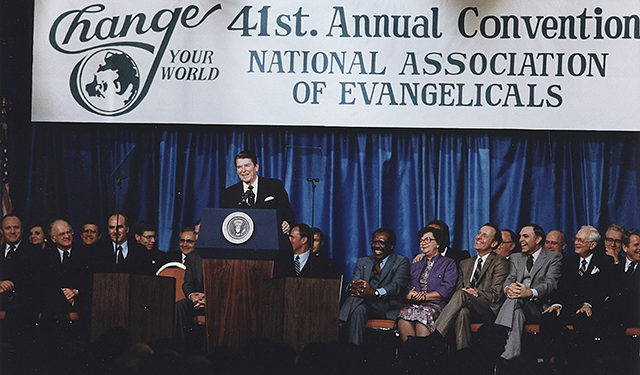 President Ronald Reagan described the Soviet Union as the “Evil Empire” before the National Association of Evangelicals on March 8, 1983. Source: Wikimedia

The times of the Cold War saw countless vicious actions and mutually vituperative speeches exchanged between the leaders of the free world and the communist camp behind the Iron Curtain, but one of them will remain stuck in our minds for as long as the globe safely continues its orbit: President Ronald Reagan’s description of the Soviet Union as the “Evil Empire” before the National Association of Evangelicals on March 8, 1983. The celebrated utterance became a real catchphrase in global politics, since perhaps quoted more often than any other line in history.

Soon after, the soviet empire collapsed, but I wonder if the world has become less evil or any safer as a consequence. Empires come and go, but evil, fear and danger never leave. Reagan managed in a matter of seconds to stigmatize the Soviet Union so badly that it became almost impossible for it to wash the black mark off. The POTUS may have been right in his world-popular judgment, but whether the USSR was actually that evil might be a question asking for a response.

As a matter of fact, the current irredeemable evil that this country suffers might more accurately be rooted in the collapse of the USSR, within the boundaries of which Georgia was in one piece. Let’s forget for a second the ideological inequity and the economic strife it went through due to the innate nature of the soviet regime, and concentrate on the since forfeited territorial integrity, which is the worst historical pain we have suffered in a long time. And not a vestige of hope looms on the horizon that it will ever be reinstated. No, here, we are talking about the deplorable fact of downsizing our land by one-third of its de-jure dimension, saying nothing about the number of its populace from five down to three and a half million people.

I am in no way decrying the loss of the soviet country, because I know very well its flaws and vices, and I am not at all for its reincarnation. God forbid! I am just trying to ask a simple rhetorical question: why was it an evil for Georgia if its territory was intact and the Georgian people’s chance to reproduce itself was indisputably higher. After all, (lack of) territorial integrity is the precursor to the acute geo-political, geo-economic and demographic problems that we are currently faced with. And I wish the list was limited to these!

Within the soviet socio-political framework, Georgia owed its existence to just one body – the soviet government, nobody asking us to return the debt or pay due interest on it. Now, we owe billions of dollars (not just rubles) to almost the entire world, and we are obligated to deliver every dollar on servicing that debt, saying nothing about the obligation to finally pay off the principal too. Forget about free and good soviet education and healthcare! Independence is expensive!

Life in general has made huge progress. Who would have dreamed of computers and cell phones in the country of soviets, or the cars of every make and model that we see in such abundance and variety on our streets? But that is also the product of changing times, as the standard of living often depends on the overall level of well-being around the globe. People are certainly better off now, but how much better off? As a soviet country, Georgia wouldn’t worry at all about the demarcation of its borders and paying the guards of the frontiers, whereas the current hateful borderization pummels at our hearts and minds on a daily basis, accompanied as it is by the frequent arrests of our citizens and their occasional deaths too.

So, why was the USSR such a big evil for Georgia? Evil it was, as such, of course, but isn’t it a historical paradox that Georgia’s headaches were at a nadir in soviet times compared to the splitting ones right now? Rejection of those quizzical comparisons might not be a difficult job for the haters of our past and the lovers of our contemporary life, but it might well be a matter of fair and wise discourse as to what side the truth would preponderate if the merits and flaws of both periods were put on a scale.