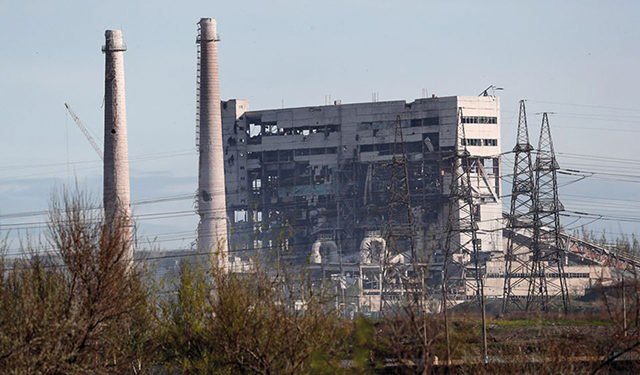 With heavy fighting continuing across Ukraine’s east, and Moscow still trying to seize control of the Mariupol steel plant, Ukrainian officials are warning that the May 9 Russian holiday of Victory Day, which celebrates Russia’s role in defeating Nazi Germany, could bring an expanded war and more destruction to the country.

The port city’s Azovstal steel plant saw another day of heavy fighting on Wednesday, with Russian troops attempting to storm the plant, which has up to 200 civilians sheltering inside.

Ukrainian officials say Mariupol residents are being forced to clear debris in the city ahead of a planned “celebration” on Monday.

Ukraine’s defense intelligence agency said the festivities would be part of the Kremlin’s “large-scale propaganda campaign,” with the destroyed city of Mariupol as a center of the “celebrations.”

A total of 344 people were evacuated from within the Mariupol humanitarian corridor on Wednesday, Ukrainian Deputy Prime Minister Iryna Vereshchuk announced.

The International Committee of the Red Cross said the safe-passage operation in the Mariupol area was coordinated by the ICRC, the United Nations and “the parties to the conflict.”

The evacuees included “women, children and the elderly” from Mariupol, as well as other areas in Ukraine’s southeast, among them Mangush, Berdyansk, Tokmak and Vasylivka.

“All of them have just arrived in Zaporizhzhia. Another of our little victories,” Vereshchuk wrote in a Telegram post. “The Mariupol humanitarian operation continues.”

On Tuesday, the first group of about 100 civilians rescued from the Mariupol steel plant arrived in Zaporizhzhia, people who survived the horrors of sheltering for more than a month in a bunker underground that was being repeatedly bombarded.

Yet, on Wednesday, heavy fighting continued at the plant as Ukrainian officials said Russian forces attempted to storm the complex using weaponry, including tanks and bombs.

Mayor Vadym Boychenko said contact has been lost with the Ukrainian forces inside.

“Unfortunately, today the connection with the boys broke off. There is no way to know what is happening, whether or not they are safe,” he said, adding that he had spoken to them the day before.

In a video posted separately on Telegram on Wednesday, Azov commander Maksym Zhorin said that for the second day in a row, Russian forces had broken into the “territory of the plant.” He echoed that heavy fighting is ongoing.

“The situation is extremely difficult, but we continue to defend ourselves,” he said.
Russia’s Defense Ministry said its forces would open more humanitarian corridors this week for civilians to evacuate.

Only a couple thousand Russian troops remain in Mariupol, the Pentagon said, as Moscow refocuses on its eastern assault.

Donetsk region
Slovyansk and neighboring Kramatorsk, both of which lie near the western border of the Donetsk region, are considered targets of the Russian advance. Capturing such targets would consolidate Russian military control of the northeastern Donbas, according to Western defense officials, as they attempt to encircle Ukrainian forces.

“So far, Russia has not made much progress outside Mariupol, the Pentagon said. Forces moving northward from there have stopped around 75 miles to the northwest in a town called Velyka Novosilka.

Meanwhile, Russian forces trying to move to the southeast from Izyum have made it about 35 miles to Lyman, a town less than 20 miles from the city of Slovyansk, a US official said Wednesday,” reported The Washington Post.

Russian forces also remained about 20 to 30 miles to the east of Kharkiv, the senior defense official said.

Russia continued its attacks on infrastructure across Ukraine on Wednesday, striking a railroad facility and a bridge in Dnipro, a city that straddles the Dnieper River.

“Russian troops continue to target railway infrastructure,” Alexander Kamyshin, head of Ukrainian railways, said on Telegram. No workers were injured in the rocket strike, he said.

The region’s governor, Valentyn Reznichenko, said Russian forces aimed two missiles at Dnipro on Wednesday, and Ukrainian air-defense systems intercepted one. The other collided with the rail station, impacting tracks and an administrative building, and delaying train service.

Ukraine’s Minister of Foreign Affairs, Dmytro Kuleba, said Wednesday that there was “another barrage of Russian missiles raining down on peaceful Ukrainian cities.”

“They want to break us with their missile terrorism,” he wrote on Twitter.