War Updates: Ukraine Counterattacks in Kharkiv while Russian Troops Are Occupied in the South 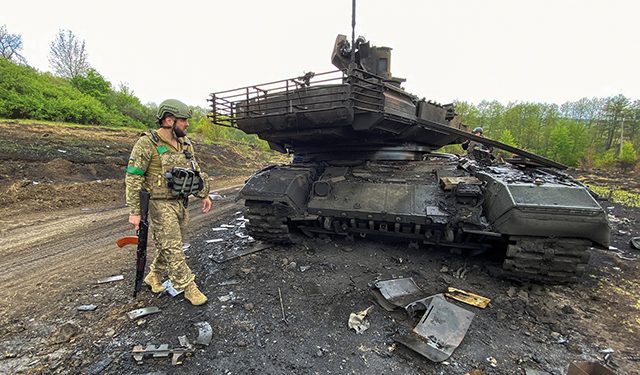 Russian President Vladimir Putin slammed the West again on Wednesday, saying sanctions imposed on Russia for its invasion of Ukraine are a “danger” to the world.

Speaking at an economic forum in Russia’s far east, Putin said Western countries have aggressively tried to impose their way of life on other countries and to make them “submit to their will.”

Meanwhile, Ukraine appears to have launched a counterattack in the Kharkiv region in the northeast of the country, with several reports of fighting in the region.

Overnight and early Thursday morning, the head of the Kharkiv regional state administration, Oleg Synegubov, posted on Telegram that Russian forces were shelling various parts of Kharkiv, the second-largest city in Ukraine, and fighting was taking place in the province.

Analysts said Russia’s redeployment of troops from eastern to southern Ukraine to defend against Ukraine’s counteroffensive there has likely enabled Kyiv to carry out the counterattack around Kharkiv.

‘Heavy fighting’ taking place in north, east and south of Ukraine, UK says
Britain’s Ministry of Defense has confirmed earlier reports from officials in Ukraine that the armed forces there have been counterattacking Russian positions in the northeastern and eastern parts of the country, as well the south, where a counteroffensive was launched last week.

“Over the last 24 hours, heavy fighting has taken place on three fronts: in the north, near Kharkiv; in the east in the Donbas; and in the south in Kherson Oblast,” the ministry said in its intelligence update Wednesday.

“Russia’s planned main effort is probably an advance on Bakhmut in the Donbas, but commanders face a dilemma of whether to deploy operational reserves to support this offensive, or to defend against continued Ukrainian advances in the south,” the ministry added.

“Multiple concurrent threats spread across 500km will test Russia’s ability to coordinate operational design and reallocate resources across multiple groupings of forces. Earlier in the war, Russia’s failure to do this was one of the underlying reasons for the military’s poor performance,” it said.

Analysts at the Institute for the Study of War said in an overnight update that “Ukrainian forces have launched likely opportunistic counterattacks in the southern Kharkiv Oblast [province] and retaken several settlements.”

The analysts noted that Russian redeployments of forces from this area to defend against the Ukrainian counteroffensive in Kherson, southern Ukraine, “likely prompted and facilitated these counterattacks.”

Zaporizhzhia nuclear power plant shutdown being considered
Ukraine’s top nuclear inspector says the Zaporizhzhia nuclear power plant could be shut down if hostilities continue around the plant. Europe’s largest nuclear plant continues to be at the center of accusations between Russia and Ukraine — with both repeatedly accusing each other of shelling the Russian-occupied facility.

The head of Ukraine’s nuclear regulatory body, Oleh Korikov, said shutting down the plant was under consideration.

“Further deterioration of the situation will lead to us being forced to operate backup diesel power generators in order to sustain our security systems, and diesel fuel reserves are very difficult to replenish in conditions of war,” Korikov said Wednesday in an interview broadcast on YouTube.

“Then it will have consequences not only for Ukraine but also for other countries,” he said.

The option of turning off the station is indeed considered if appropriate conditions arise that would require such a stop. If this happens, the 6th power unit will be turned off.

The 6th reactor is currently the only one functioning in the plant, which was inspected by the International Atomic Energy Agency last week.

In the 52-page report, IAEA investigators warned that while ongoing shelling “has not yet triggered a nuclear emergency, it continues to represent a constant threat to nuclear safety and security.”

“The IAEA recommends that shelling on site and in its vicinity should be stopped immediately to avoid any further damages to the plant and associated facilities, for the safety of the operating staff and to maintain the physical integrity to support safe and secure operation,” wrote IAEA Director General Rafael Grossi.

Ukraine’s Permanent Representative to the United Nations Sergiy Kyslytsya said that Russia tried to exert pressure on IAEA Director General Rafael Grossi during his visit to the Zaporizhzhia nuclear power plant. Grossi, who led a team of investigators to the site earlier this month, published a report yesterday on the nuclear watchdog agency’s findings.

Grossi recommended an immediate establishment of a demilitarized zone at the nuclear plant.

In May, both nations began the formal process of applying to NATO as Russia’s war in Ukraine raged. All 30 members of the alliance have to ratify for Sweden and Finland to be allowed into the group.
Greece, Hungary, Portugal, Slovakia, Spain and Turkey are the last six allies yet to do so.

Putin and Xi to meet next week as war in Ukraine shows no signs of stopping
Russian President Vladimir Putin and Chinese President Xi Jinping plan to meet next week in Uzbekistan, a Russian official said Wednesday, announcing a summit that could signal another step in warming ties between two powers that are increasingly facing off against the West.

Putin and Xi last met in Beijing in February, weeks before the Kremlin sent troops into Ukraine.

The two presidents oversaw the signing of an agreement pledging that relations between the sides would have “no limits.”

It remains unclear whether Xi knew at the time of Russia’s plans to invade Ukraine.