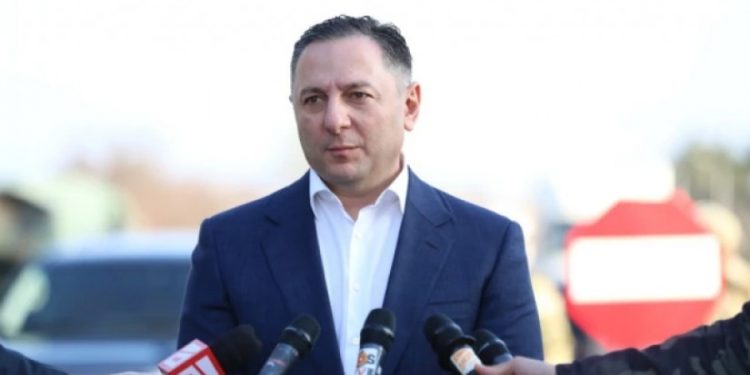 The Minister of Internal Affairs, Vakhtang Gomelauri, arrived in Borjomi Municipality and got familiarized with the situation on the ground.

Gomelauri, together with the Minister of Defense Juansher Burchuladze and the Minister of Environment Protection and Agriculture Otar Shamugia, inspected the affected area and attended the working meeting at the operative management headquarters.

“All fire sources are not yet localized. They are being worked on. As yesterday it was a windy, an almost extinguished and localized fire ignited again and spread to another mountain. We still have small and active fire sources at the moment.

“The employees of the Ministry of Internal Affairs and Defense have been deployed, however, if water is not provided, the arrival of personnel alone cannot extinguish the fire, therefore, equipment is working to build roads so that water can reach its destination.

“The danger, of course, is the wind. If there is no wind, we will work again at night and the situation will be better tomorrow. If the wind picks up, of course, there is a risk of the fire spreading, possibly to a broader area.

“We have localized the fire spreading towards the villages, vehicles are mobilized so as not to allow the fire to move towards the villages. If there is a strong wind, it is possible that more area will become affected by fire than currently. If the wind does not pick up, we will have weaker fire spots for tomorrow.

“When it was considered necessary, we called in the helicopter. Yesterday weather conditions meant they could only pour water four times, and then it was so windy that helicopters could not fly. They didn’t consider it necessary on the first day, they started working, but the wind blew up and spread the fire. There are no specific rules on when the helicopter should be involved and when it shouldn’t, there is no such thing in the world, not only in this country, it does not exist anywhere. When they considered it necessary, found it difficult to localize the fire, they called for a helicopter. They managed to get a few shots, but it was so windy that we couldn’t bring the rest of the helicopters.

“I would like to emphasize one aspect regarding the helicopter, don’t imagine that if the helicopter flies over and pours water, everything will be over. Without people’s physical work on the ground… we looked at the ground, poured water, dug about 30 centimeters in, and the fire was still there. The main fire source might be treated with water, but if you don’t go down and treat it by hand, it can reignite in an hour,” stated Gomelauri.

At the moment, 300 firefighters and 300 employees of the Special Tasks Department are participating in the fire extinguishing activities. Border police helicopters have been involved in the process since yesterday and this morning and relevant fire-rescue vehicles have been mobilized. Fire sources are monitored by drones. An operational management headquarters has been established on the site.