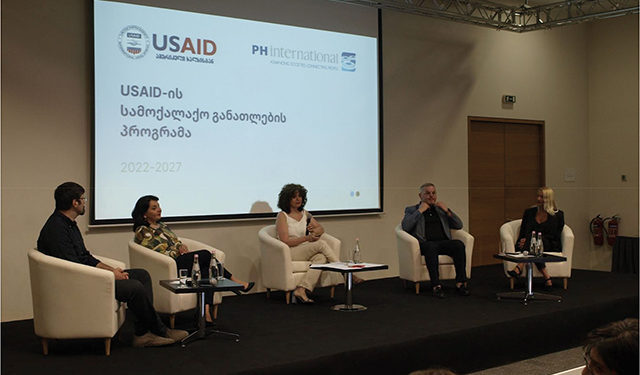 A panel discusses the potential for the new USAID and PH International partnership Civic Education Program. Photo by Mike Godwin

A USAID Civics Education Program is being implemented across the country by PH International. The program aims to help Georgia’s youth become more adept in democratic principles, develop student-led civics programs, and provide technological resources to get students engaged in public democratic governance and social discourse.

USAID has a long history of supporting a wide range of social and cultural development programs. This partnership program is the latest endeavor specifically aimed at youth development. Since the mission started in 1992, the United States has invested over $1.8 billion in a litany of development and sustainment programs, some of which are not dissimilar to the new Civic Education Program. With the support of Georgia’s Ministry of Education and Science, a multitude of bright young minds have been afforded unique opportunities through teaching, technology, and new partnerships.

Among these partnerships is the inclusion of a familiar organization in Georgia. PH International has been present here since 1996, and has helped with both adult and youth development programs, focusing on harnessing technology to advance people’s opportunities and businesses. They have also been instrumental in helping language teachers expand their capabilities through seminars and in-person training sessions at schools.

As Georgia has moved immensely close to the democratic spheres of the West, many younger Georgians have been left hungry for more involvement in their local and national government. Aside from some outreach programs run by a few political parties, only small politically active groups in universities were vocal about this need. With this new partnership, USAID is making these student-led organizations more accessible, and is equipping them with more resources.

USAID/Georgia Mission Director Peter Wiebler leads this new initiative. He became the Mission Director of USAID/Georgia in July 2018 after serving in the United States under the Office of Budget and Resource Management. His outlook on the program signifies that there is immense potential between both USAID and the partner organizations that are coming together to make the Civic Education Program a reality.

When discussing why USAID has targeted the youth development sector, he tells us, “Georgia’s democratic development is the key to Georgia’s broader development.” Wiebler explains that the young people of the country are the ones that are ultimately left with the task of further integration into Western spheres. Informing these youth of the duty of citizenship is what connects the people to their government, as he continues, saying, “we support civic education to help Georgia’s young people not only understand their rights but also their obligations in a democracy.”

He notes that education is the core of the program’s main effort. Reaching these young people in their formative years is the opportune time to help them understand the society and culture they are a part of.

“Essentially, education is at the base of all of the elements that drive Georgia’s development projects. They need well educated and informed workers to modernize its economy and increase broad based prosperity for all Georgians,” he says. “It also needs well-informed, active, and educated citizens who know their rights and obligations in order to help Georgia move closer towards Europe and the Western family of countries.

The USAID director reiterates that the organization has a firm commitment to the nation, and that its aim is heavily woven into the betterment of Georgia overall.

“USAID’s commitment to this area is very strong, we’re very proud of the program that we’re launching today and we know it’s going to be successful.”

He stresses that it is not only the USAID and partner organizations that are involved in this shift. Wiebler says that it is a community effort, with particular emphasis on students, teachers, and community leaders that play an important role in the program’s goals.

“It’s important to seize this moment, this opportunity, to provide the insights and chances to change the mindset of Georgia’s young people to understand that Georgia’s democracy and this country is really theirs,” he emphatically says, referring to the unique role many of the program’s potential student participants have. Supporting organizations are numerous, including over 650 schools from across the country. Others that have a stakeholder partnership in this project include Civic Education Teachers Forum, The Guivy Zaldastanishvili American Academy in Tbilisi, GeoLab, Resonance USA, and an additional 11 regional partners.

In addition to these invaluable components of this immense undertaking, Wiebler states that the real effort is done at the ground level. The teachers and students in the community have the most important work ahead of them.

With excitement in his voice, Wiebler concludes by saying, “The program we are launching today can only be successful if we have [the communities’] help and contributions, but most importantly partnerships so we can work with the communities to make this program as successful as possible.”