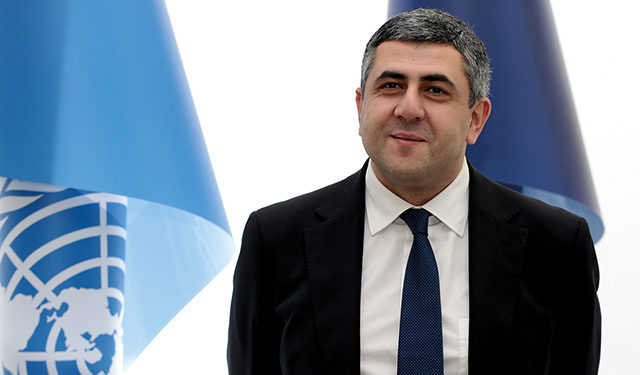 During the 113th session of the UNWTO Executive Council, held in Madrid, Georgia’s candidate for the position of Secretary-General of the UN World Tourism Organization, Zurab Pololikashvili, was nominated for a second term by the Executive Board.
While the Georgian ruling candidate had made himself available for a second run, the Kingdom of Bahrain had nominated Shaikha Mai bint Mohammed Al Khalifa for the position.
The newly-elected Secretary-General will be approved at the General Assembly session in the second half of 2021, according to the Ministry of Foreign Affairs of Georgia. Pololikashvili’s second term will begin in 2022 and last through 2025.

“The Minister of Foreign Affairs of Georgia, David Zalkaliani, the Chairman of the Committee on Sectoral Economics of the Parliament of Georgia, David Songhulashvili, and members of the Georgian delegation attended the meeting of the Executive Board of the organization in Madrid. The Prime Minister of Spain Pedro Sanchez and the candidate for the UN Secretary General for Tourism Zurab Pololikashvili addressed the participants of the session”, – reads the statement of the Georgian MFA. Within the framework of the session, Georgian Minister of Foreign Affairs David Zalkaliani held a meeting with the Spanish Interior Minister, Fernando Grande-Marlaska.

The meeting was a hybrid event, combining in-person and virtual participation, according to the UNWTO statement. The Committee brought together tourism leaders from around the world, as well as UN agencies and representatives from civil society and the private sector. Among many topics discussed in Madrid during the two-day event, one of the key issues debated was how COVID vaccines could help restart global tourism.
The organization has made a Facebook announcement regarding Pololikashvili’s reelection.
“The #UNWTO Executive Council has voted for Secretary-General Zurab Pololikashvili to lead #UNWTO for four more years, with Members backing his vision for the ‘restart and rethink’ of tourism.
The election concluded the 113 #UNWTOEC where we advance and lead the #RestartTourism” campaign reads the UNWTO Facebook post.