Ukraine’s “Battle of Wonders” – What do Zelensky, Churchill, and David the Builder Have in Common? 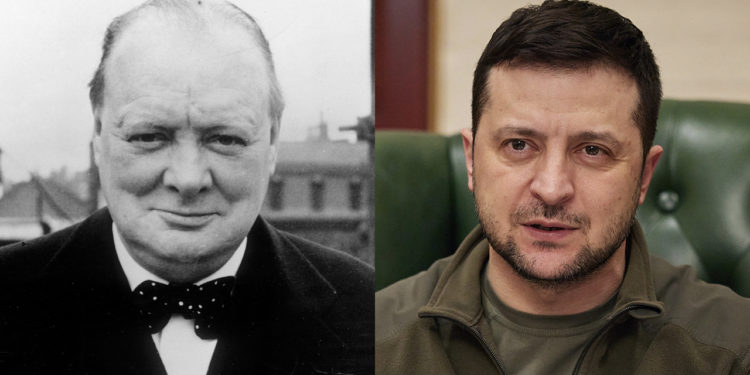 President Zelensky’s historic speech before the British House of Commons was particularly impressive, seeing the Ukrainian warlord comparing himself to Churchill. Although the great British PM’s name was not mentioned specifically, it was clear to everyone whose words he was speaking: “We will not give up, we will not lose. We will fight to the end, we will fight in the sea, we will fight in the air. We will continue to fight for our land no matter how much it costs us! We will fight in forests, fields, on the beaches and in the streets.”

Many may not understand the logic behind comparing these two leaders today, when we are talking about a completely different historical epoch and a long distance in time, but the more we observe, the more convinced we can become that the similarities are great, and not just in their utterances.

Managing the country (has) left both leaders in an extremely difficult and hopeless situation. Both in personal danger, both facing the greatest risk of losing their lives.

However, neither Churchill nor Zelensky thought about fleeing and taking refuge in a safe place, the rare expression of optimism turning out to be a major factor in uniting the people at war.

Moreover, President Zelensky has become a symbol of resistance and resilience because of his words and actions, just as Churchill’s every public speech in his time filled with hope and gave strong motivation to millions of people in Britain and beyond.

Despite the unbelievably strong resistance of the Ukrainian army and volunteers, which has dealt a severe blow to the evil empire, Russia’s military capabilities are still vast, and no-one knows what the modern-day Hitler is planning next; the number of crimes committed against humanity knows no bounds.

Yet, despite such a degree of uncertainty, when no one can accurately predict the future, President Zelensky and the Ukrainian people, encouraged by his words and daily heroism, look death in the eye. No-one is going to give up because they know the Supreme Commander-in-Chief is not going to run away from the battlefield.

“I am here! We are here! We will defend Ukraine!” President Zelensky addressed the people in the very first days of the war.

This was also the case with Churchill, who, in 1940, a few days before delivering a historic speech before the House of Commons, told his teammates that he was going to fight to “the last drop of blood,” that the enemy would not fall alive into his hands and surrender.

Such is the nature of bold and courageous leaders! When you have the ability, even when you cannot know how the events around you will end, to gather strength and utter such impressive and decisive words!

That’s right! As Churchill had no way of knowing what end the ruthless war would bring, nor did Zelensky know what the Russian atrocities would be, yet he still stands “firmly and unshakably” (“Stand firm and unshakable” – the inscription on the floor of the Monastery of the Cross in Jerusalem).

If this editorial was written by an American or any other editor, the comparison might be limited to Zelensky and Churchill, but how could I, the editor of the Georgian version of Entrepreneur magazine, not remember Davit Agmashenebeli, David the Builder (King David IV), when we speak about devotion, courage, bravery, loyalty, and fighting to the end ?!

King David’s words before the Battle of Didgori, his address to the Georgian warriors, despite the fact that nine centuries separate us from that time, are the most impressive example in the history of Mankind, of immortal devotion to ideals and self-sacrifice:

“Behold, warrior Christians, if we fight diligently to uphold the law of God, we will easily defeat not only the followers of the law of the devil, but also the devil himself! I recommend something that is good for our honesty and benefit. We will die on this battlefield for love, and even if we do not want to be able to escape, we will enter the valley through which we enter, we will gather with many trees, and when the enemy approaches us, will attack them with a firm heart.”

Nine centuries on, President Zelensky publicly addresses the Russian army: “If you attack us, you will see our faces and not our backs.”

History repeats itself. The “Battle of Wonder” will end today with the victory of good over evil, as it did on August 12, 1121.

Glory to Ukraine! Glory to the heroes!