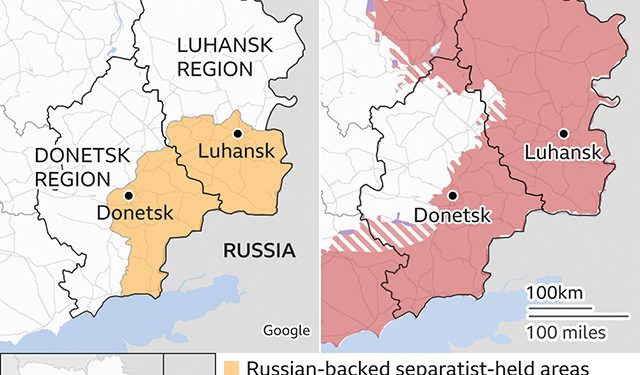 Here are the latest developments:
• A Russian missile struck Kyiv for the first time since April
• Russian forces have consolidated control over the eastern city of Severodonetsk
• Russian troops are continuing to attack Ukrainian positions north of Kharkiv city
• Ukrainian positions in the south have come under shelling

Eastern cities under heavy bombardment
Russian officials have said their forces are fighting for the “complete liberation” of the Donbas, which broadly refers to Ukraine’s eastern regions of Donetsk and Luhansk, where Russian-backed separatists held significant territory before the invasion.

Russia has made slow but significant advances in the east, at the cost of heavy losses of both troops and equipment.

In the past week, Russian forces have taken over the eastern city of Severodonetsk, giving them control of almost all of the Luhansk region.

On Sunday morning, Russian cruise missiles were fired on areas far from the frontline.

Following the capture of Severodonetsk, Russian forces are now reportedly attacking the neighboring city of Lysychansk, reports the Institute for the Study of War (ISW).

Further west, Russian forces have continued to launch attacks towards Slovyansk from the direction of Izyum, aiming to regain momentum in the area, reports the MoD.

The MoD says Russia is likely to have suffered devastating losses among its middle and junior ranking officers. It says these losses are likely to contribute to a loss of morale and poor discipline among lower ranks. Significant quantities of Russian weaponry have also been destroyed.

Further north, Russian units are vying for control over advantageous defensive positions north of Kharkiv and are attempting to protect ground lines of communication to the Donbas, according to the ISW.

Russia targets full control of south
Russian forces initially made rapid gains in the south, with their main objective being the creation of a land corridor between Crimea, which it annexed in 2014, and areas held by Russian-backed separatists in Donetsk and Luhansk.

However, strong resistance from Ukrainian forces near Mykolaiv in the west and in Mariupol significantly slowed Russian advances.

Russia is now fully in control of the port city of Mariupol, after a siege lasting more than two months came to an end on May 20. Some 100,000 people still remain in the city.

Russian troops have continued to shell Ukrainian positions across the southern regions of Zaporizhia, Kherson, Mykolaiv and Dnipropetrovsk.

ISW says Russia’s current priority in the south is to halt Ukrainian counterattacks, which have succeeded in regaining some territory in recent weeks.

To the west, Russia had aimed to take control of Odessa and cut off Ukraine’s access to the Black Sea, but its forces were blocked by a staunch defense in Mykolaiv and forced back towards Kherson by a Ukrainian counteroffensive in March.

Analysts say Russia has continued to reinforce Snake Island in the Black Sea with air defenses in order to protect its naval vessels blockading the Ukrainian coast and hindering the resumption of trade.
Areas in the west of the country, including Lviv, have seen missile attacks but no attempt by Russian forces to take and occupy ground.

US Unveils New Russia Sanctions, Outlines G7 Plans
The United States government took a slew of actions against Russia on Tuesday, sanctioning those whom it says support Russia’s defense industrial base, designating Russian military units for human rights abuses in Ukraine and implementing a ban on new imports of Russian gold.

The moves are the latest in response to Russia’s months-long war in Ukraine and were taken after G7 leaders in Germany agreed to steps, including the gold import ban, meant to weaken Moscow.

In a statement, the US Treasury Department announced sanctions on 70 entities, including State Corporation Rostec “a massive Russian state-owned enterprise formed to consolidate Russia’s technological, aerospace, and military-industrial expertise” and its key holdings and affiliates, as well as 29 Russian individuals.

Rachel Rizzo, a senior fellow at the Atlantic Council’s Europe Center, told CNN that imposing sanctions on Rostec is significant, noting that it “is basically the foundation of Russia’s defense industrial base.”

“It’s a massive state-owned enterprise and it involves different sections on tech, aerospace, military industrial expertise,” she said. “The company subsidiaries, they’re basically engaged in a super wide range of different industries, like auto and defense and metals.

“If we can cut off their ability to export, import, sell, buy in these different sectors that then help Russia fund and continue to wage war against Ukraine, then that significantly decreases Russia’s ability to do so,” Rizzo said.

However, she noted that she does not believe “that any of the sanctions that we are implementing are meant to deter Russia in the very near term.”

In a separate statement Tuesday, Secretary of State Antony Blinken announced the State Department was imposing sanctions on 45 entities and 29 individuals, and moving to impose visa restrictions “on 511 Russian military officers for threatening or violating Ukraine’s sovereignty, territorial integrity, or political independence,” and “on 18 Russian nationals in relation to the suppression of dissent, including politically motivated detentions.”

“The Department of State is also designating Russian military units that have been credibly implicated in human rights abuses or violations of international humanitarian law as part of our commitment to promote accountability for atrocities in Ukraine,” Blinken said in his statement.