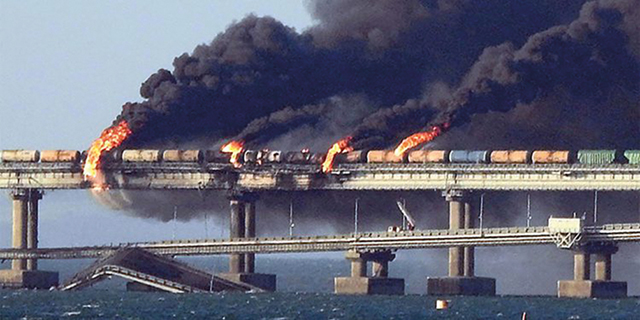 Eight people have been detained over the weekend’s attack on the Crimea bridge, and Russia’s security forces have named a senior figure from Ukraine as being behind them, according to reports from the state-owned Tass news agency, which quotes a statement from the Federal Security Service (FSB) saying:

“The Federal Security Service, together with the Investigative Committee, established that the organizer of the terrorist attack on the Crimean Bridge was the Main Intelligence Directorate of the Ukrainian Defence Ministry, its head Kyrylo Budanov, employees and agents.

“Currently, five citizens of Russia, and three citizens of Ukraine and Armenia who participated in the preparation of the crime, have been detained within the frames of the criminal case.”

The FSB claims that the explosives which caused a section of the bridge to collapse were sent from Odessa through Bulgaria, Georgia and Armenia. Tass reports that the cargo carrying the explosives was being sent to a non-existent company in Crimea, which Russia annexed in 2014.

The Georgian Deputy Minister of Internal Affairs, Aleksandre Darakhvelidze, commented on the accusations of the Russian special services regarding the explosion on the Crimean bridge and said that the Georgian side had nothing to do with the mentioned issue.

“Georgia has nothing to do with the issue. Both transit and non-transit cargoes pass customs control in Georgia. No suspicious fact was recorded,” he said.

The explosion on Crimean bridge was named a “terrorist attack” by Russia. In response, it bombed several Ukrainian cities, including capital Kyiv, on Monday. It was the broadest aerial assault against civilians and critical infrastructure since the early days of Moscow’s invasion.

After missiles hit at least 10 Ukrainian cities, President Putin warned in a televised address that “no-one should have any doubt” that Russia will defend itself. He threatened further strikes if Ukraine continued to hit Russian targets.

Russia’s attacks killed at least 11 people nationwide and wounded 64 others, the Ukrainian State Emergency Service said, and knocked out power and other key services in multiple cities.

The barrage of strikes, from Lviv in the west to Mykolaiv in the south and Kharkiv in the northeast, slammed into civilian areas and apparently also sought to cripple energy facilities as winter approaches.

The explosions blew out the windows of buildings in central Kyiv, set vehicles ablaze, and sent residents scrambling for shelter at a time when many were heading for school or work.

The attacks demonstrated that Russia still has the ability to strike deep into Ukraine and terrorize civilians, even as Moscow’s forces struggle on the battlefield in the eighth month of their invasion. Ukrainian troops have reclaimed more than 1,200 miles of territory in the east and south in recent weeks, and Putin has faced mounting criticism of his army’s performance and growing opposition to his call-up of hundreds of thousands of civilians into military service.

Serhai Haidai, Ukraine’s governor of Luhansk, posted an update on Telegram on Ukraine’s military progress in the occupied Luhansk region:

The armed forces of Ukraine are moving forward little by little. The Russians are shelling our positions mainly with rocket and barrel artillery. The occupiers are building a multi-layer defense line in Luhansk region- the entire first section of the front line has been mined by them. Our military has already encountered the first wave of partially mobilized Russians.

Luhansk is one of the regions of occupied Ukraine which the Russian Federation has claimed to have annexed following a widely-derided “referendum”.

“Ukraine’s Operational Command ‘South’ reported that they completed over 300 fire missions, targeting and damaging two Russian Gvozdika self-propelled howitzers and an APC,” the Kyiv Independent said in a tweet.

The G7 condemns Russian attacks
The leaders of the G7 on Tuesday condemned Russia’s most recent missile attacks on cities across Ukraine “in the strongest possible terms” and vowed to stand “firmly” with Kyiv “for as long as it takes”.

Zelensky further pleaded with the leaders in an emergency meeting to establish an aerial shield to thwart Russian strikes that have wreaked havoc on his nation.

“I am asking you to strengthen the overall effort to help financially with the creation of an air shield for Ukraine. Millions of people will be grateful to the Group of Seven for such assistance.”

He warned that Russian President Vladimir Putin “still has room for further escalation.”

The G7 nations of Canada, France, Germany, Italy, Japan, the United Kingdom, and the United States promised to continue providing Ukraine with “financial, humanitarian, military, diplomatic, and legal support… for as long as it takes” in a joint statement issued at the conclusion of the conference.

They reaffirmed the fact that attacks against civilians are war crimes and vowed to “hold President Putin and those responsible to account.”

The G7 condemned Russia’s “deliberate escalatory steps,” including “irresponsible nuclear rhetoric” and “partial mobilization of reservists,” which were endangering “global peace and security.” “We reaffirm that any use of chemical, biological or nuclear weapons by Russia would be met with severe consequences.”

Roughly 30% of Ukraine’s energy infrastructure has been hit by Russia since Monday, officials said. As millions in Ukraine are facing blackouts due to the attacks, the government has urged civilians to cut their electricity use and not use domestic appliances such as ovens and washing machines.