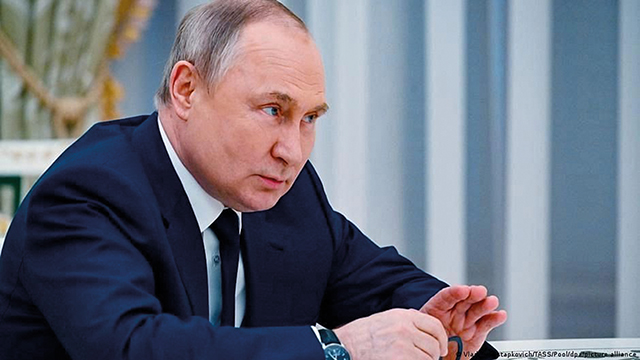 The “heaviest of battles” lies ahead in Kherson as Ukrainian troops advance on occupying Russian forces, according to a Ukrainian presidential advisor. While Russia’s grip on the strategic territory is shakier than in previous months, it does not appear ready to abandon it. Rather, it appears to be digging in for prolonged fighting after ordering civilians to evacuate while inviting the remaining men to join local militias.

Russia began its annual nuclear exercises Wednesday, with President Vladimir Putin observing the large-scale drills of the country’s strategic forces via video. While the drills are routine, Moscow has threatened to use nuclear weapons several times since invading Ukraine in February.

The exercises came as Putin, in a meeting with the security services of former Soviet states on Wednesday, repeated the unfounded claim that Ukraine is planning to use a “dirty bomb,” an explosive device that includes radioactive material. Western officials have repeatedly denounced the claim as misinformation.

Meanwhile, a member of Russia’s security council has called for the “de-Satanization” of Ukraine, claiming the country is home to hundreds of satanic sects and radicalism. The claims were met with ridicule by Ukrainian public figures.

“Nobody believes the nonsense Russian accusations toward Ukraine,” Estonian Foreign Minister Urmas Reinsalu said in an interview with The Washington Post. Still, recent nuclear rhetoric has Western governments concerned, Reinsalu said, because of the fear that Russia could “itself commit a nuclear terror attack” as a form of provocation.

Despite the drills, Russia’s ambassador to the UK said that Moscow has no plans to use nuclear weapons.

“It is out of the question,” Andrey Kelin said in an interview with CNN that was broadcast Wednesday. He said that Shoigu, who has spoken with his counterparts in multiple countries in recent days, has “assured every minister” that Russia is not going to use nuclear weapons.

The latest key battlefield developments are:

• Ukrainian efforts to push Russian forces out of the southern Kherson region have been hampered by rainy weather and the local terrain, Ukraine’s Defense Minister Oleksii Reznikov said Wednesday, Reuters reported. “The south of Ukraine is an agricultural region, and we have a lot of irrigation and water supply channels, and the Russians use them like trenches,” he said, adding: “This is the rainy season, and it’s very difficult to use fighting carrier vehicles with wheels.”

• A Russian antiwar group claimed responsibility for an explosion on a railway near the Russia-Belarus border this week, Britain’s Defense Ministry said. The incident is the sixth carried out by the Stop the Wagons group against rail infrastructure since June, according to the ministry, which noted that the Russian military is heavily reliant on railways for its deployments to Ukraine.

• Ukrainian citizens residing abroad should not return home for the winter, a Ukrainian official said Tuesday, citing the need to save energy from power facilities recently crippled by Russian strikes. “We need to survive the winter, but unfortunately, the networks will not survive,” Iryna Vereshchuk said in a plea on Ukrainian television, according to the Associated Press.

Global impact
The Polish Senate passed a resolution Wednesday recognizing Russia’s government as a “terrorist regime.” In the resolution, lawmakers highlighted reports of Russian forces torturing, murdering, kidnapping and deporting Ukrainian civilians. “We know all these acts of state terrorism well from the history books. Europeans believed that they would never again be threatened with genocide and war crimes,” a Senate release said.

Jens Stoltenberg, NATO Secretary General, had three important messages for Russia and the world this week: “We are ready to help Ukraine for as long as it needs us to,” he said. “We cannot allow President Putin to win. It would be a disaster and a tragedy for the Ukrainians, but at the same time for the NATO allies.

“The consequences of any nuclear weapon use have been conveyed directly to Russian President Vladimir Putin. The US is tracking the Kremlin’s nuclear saber-rattling very carefully but hasn’t seen any reason to change our nuclear posture,” Stoltenberg noted. “The US has also communicated directly with the Russians about trying to use this false allegation as a pretext for any escalation.

Finally, the NATO Sec Gen proclaimed: “President Putin is failing on the battlefield. He is responding with more indiscriminate attacks on Ukrainian cities against civilians and critical infrastructure and with dangerous nuclear rhetoric. But every week, Ukraine’s forces are getting stronger and better equipped.”