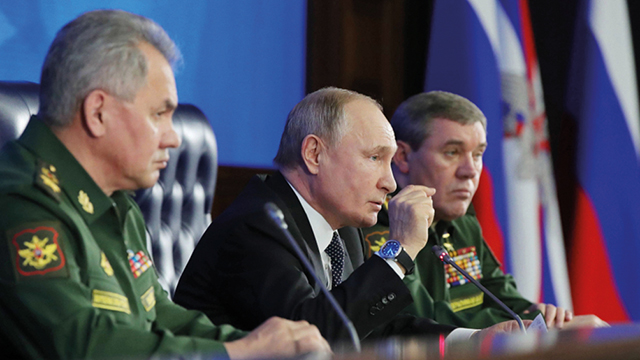 There are conflicting reports about whether the strategically important town of Soledar in Donetsk in eastern Ukraine has been captured by Russian forces.

On Tuesday, the head of the Russian private military company, the Wagner Group, which has been fighting in the area around Soledar and Bakhmut for months, claimed that his fighters had taken “control of the entire territory of Soledar,” while urban warfare continued.

One Ukrainian official claimed that the town was only “semi-surrounded”, while another said that Ukrainian forces were holding out.

Zelensky also said fighting in Soledar is still ongoing, and mocked the Russian claims to have taken over parts of the city.

Soledar is known for its salt mines, and capturing the town would give Russian forces an advantageous location from which to launch more assaults on nearby Bakhmut, the capturing of which is seen as a key goal for Russia as it looks to seize full control of the eastern Donetsk region.

Putin’s New Commander Likely to be Greeted with ‘Extreme Displeasure’ by Some Pro-war Russians
Vladimir Putin has put the Head of the Russian Armed Forces in direct command of the Ukraine war, but the appointment probably will not sit well with some quarters in Russia, according to an intelligence assessment released late Wednesday.

Gerasimov had served as Chief of the General Staff. Pro-war elements in Russia widely blame Gerasimov for their military’s inept performance in the war.

The move to put him in charge “is likely to be greeted with extreme displeasure by the Russian ultra-nationalist and military blogger community, who have increasingly blamed Gerasimov for the poor execution of the war,” Britain’s Ministry of Defense said in an intelligence update.

Gerasimov replaces General Sergei Surovikin, who took operational command of the war only three months ago.

In contrast to Gerasimov, Surovikin has been praised by ultra-nationalists for his “more realistic” approach, the UK ministry said. He had previously led Russian forces in Syria and oversaw the brutally indiscriminate bombardment of Aleppo.

Surovikin will now report to Gerasimov.

Western Support
The European Union is “prepared for a long war” in Ukraine and will support Kyiv against Russia’s aggression for “as long as it takes”, said Sweden’s foreign minister Tobias Billström, whose country holds the EU’s presidency. He also said the EU would continue working on more sanctions against Moscow over the invasion of Ukraine.

NATO and the EU are launching a taskforce to bolster the protection of critical infrastructure in response to last year’s attack on the Nord Stream gas pipelines and Russia’s “weaponizing of energy,” leaders said on Wednesday. The European Commission President, Ursula von der Leyen, said the taskforce would initially come up with proposals on transport, energy, digital and space infrastructure.

The British government is planning to provide tanks to Ukraine to help the country defend itself against the Russian invasion, the Financial Times reports. A spokesperson for Number 10 said that Prime Minister Rishi Sunak has asked Defense Secretary Ben Wallace, to “work with partners” and to provide further support to Ukraine, “including the provision of tanks”.

Poland plans to send Leopard tanks to Ukraine as part of an international coalition, the Polish president has said, according to reports. Kyiv has been requesting heavy military vehicles such as the German-made Leopard 2, which would represent a significant step up in Wsestern support to Ukraine.