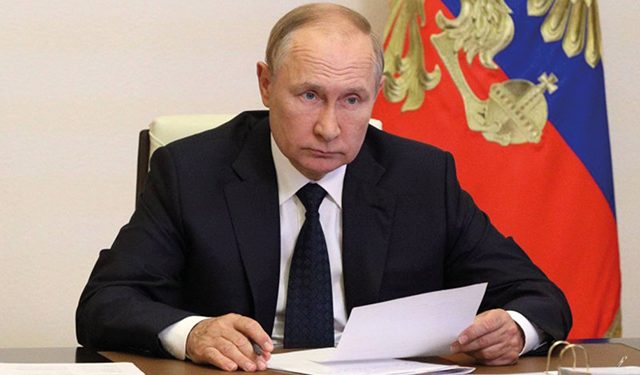 Russian President Vladimir Putin said martial law will be introduced across the four Ukrainian territories he illegally annexed last month. Military officials will take direct responsibility for civilian government function in the Donetsk, Luhansk, Kherson, and Zaporizhzhia regions, Putin said at a meeting of his security council on Wednesday.

Meanwhile, pro-Kremlin separatist officials warned that the war’s front line could soon reach the Russian-controlled city of Kherson, and they ordered residents to leave Wednesday morning in anticipation of a major Ukrainian push to retake the city, Russian state media reported.

This week’s key developments
Kyiv’s air defenses have shot down multiple Russian missiles above the capital, the city’s mayor said Wednesday on Telegram. Melinda Simmons, the UK’s Ambassador to Kyiv described hearing, from a bomb shelter, the air defenses kicking into action. She described the atmosphere in the capital as “calm”.

The fight for Kherson could begin in the “very near future,” a pro-Russian separatist official said Wednesday morning. At least 50,000 inhabitants will be transported out of the city, including to Russia, in an operation that pro-Moscow authorities say will take about a week, Russia’s RIA Novosti news agency reported.

A Western official who spoke on the condition of anonymity said Russian forces are still defending on the western side of the Dnieper River, but are withdrawing some civilians. “These are not the actions of an occupying force that is confident in its ability to hold lines,” the official added.

He held a meeting on the country’s energy system on Wednesday amid increasing fears of power outages in the winter. Moscow continued attacks on Ukraine’s energy grid this week, hitting a power facility in Kyiv three times Tuesday, a presidential aide said.

Battleground updates
NATO anti-drone systems will be delivered to Ukraine in the next few days, Jens Stoltenberg, the alliance’s secretary general, said Tuesday in Berlin. The air defenses will be capable of countering Iranian-made drones, he specified, after Ukraine accused Russia of using the weapons to barrage its capital on Monday.

Ukrainian Foreign Minister Dmytro Kuleba said he was ready to submit a “bag of evidence” to prove the drones’ origin, Reuters reported, and he proposed severing diplomatic ties with Tehran completely.
Major elements of Russia’s military leadership are “increasingly dysfunctional,” the British Defense Ministry said Wednesday. Four of the five generals responsible for directing the Russian invasion in February have been dismissed from their posts, and there is a growing shortage of officers capable of organizing newly mobilized reservists.

Russian President Vladimir Putin said Moscow has no plans to expand military mobilization and warned a direct clash with NATO would lead to “global catastrophe.”

At a news conference in the Kazakh capital Astana, Putin said the “partial mobilization” he announced last month, which the defense minister said aimed to recruit 300,000 soldiers, was finishing and would be over within two weeks.

So far, 222,000 of the 300,000 reservists the Russian Ministry of Defense said would get called up have been mobilized, Putin claimed.

EU Council Sets Up Military Assistance Mission in Support of Ukraine
The EU Council this week agreed to set up a Military Assistance Mission in support of Ukraine (EUMAM Ukraine). The aim of the mission is to contribute to enhancing the military capability of Ukraine’s Armed Forces to effectively conduct military operations, in order to allow Ukraine to defend its territorial integrity within its internationally recognized borders, effectively exercise its sovereignty, and protect civilians.

In response to Ukraine’s request for military support, EUMAM Ukraine will provide individual, collective and specialized training to Ukraine’s Armed Forces, including to their Territorial Defence Forces, and coordination and synchronization of member states’ activities supporting the delivery of training.

“Today, we step up our support to Ukraine to defend itself from Russia’s illegal aggression. The EU Military Assistance Mission will train the Ukrainian Armed Forces so they can continue their courageous fight. EUMAM is not just a training mission, it is clear proof that the EU will stand by Ukraine for as long as is needed,” stated Josep Borrell, High Representative for Foreign Affairs and Security Policy.
EUMAM Ukraine will operate in the territory of the EU member states and will have its Operational Headquarters within the EEAS in Brussels in order to ensure overall coordination at the strategic level.

Vice Admiral Hervé Bléjean, the Director of the Military Planning and Conduct Capability (MPCC) within the EEAS, will be the Mission Commander.

The mandate of the non-executive mission will initially last two years, and the financial reference amount for the common costs for this period will be EUR 106,700.000.

The mission will ensure coordination with member states’ bilateral activities in support of Ukraine, as well as with other like-minded international partners, and will be open to the participation of third states.