Ukraine Latest: Drones Shot Down over Kyiv, US and Russia Make Another Prisoner Swap 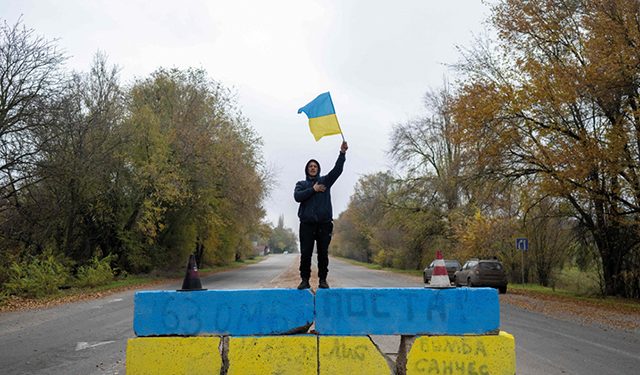 Ukraine’s capital Kyiv again woke to blasts and air raid sirens on Wednesday, according to reports from local officials who said the city had been attacked by Iranian-made “Shahed” drones.

Oleksii Kuleba, the head of the Kyiv regional military administration, warned residents that the air alert remained in place and that civilians should take shelter.

It’s unknown what structures the drone attacks were targeting, but Kuleba said “Russia continues the energy terror of the country.”

Ukrainian officials issued an update on the drone attacks, saying the number of Iranian-made “Shahed” drones shot down has risen from 10 to 13.

“Kyiv suffered two waves of attack by enemy drones,” Serhii Popko, head of the Kyiv City Military Administration, said on Telegram Wednesday. Thanks to the effective work of the air defense and EW (electronic warfare) units, 13 enemy drones were destroyed.” He said the unmanned aerial vehicles had hit one administrative building (an earlier report suggested two administrative buildings had been damaged) and four residential buildings had suffered minor damage in the Shevchenkivsky district of the capital.

“People were not injured,” he said.

Zelensky: Russia is destroying city after city
Ukrainian President Volodymyr Zelensky said Russian forces are destroying “everything in front of them.”

“There is no calm on the front line. There is nothing easy and simple. Every day and every meter is fought for extremely hard,” Zelensky said in his night address on Telegram.

“Russia is destroying city after city in Donbas – like Mariupol, like Volnovakha, like Bakhmut,” he added.
Zelensky thanked the Ukrainian forces for “repelling another attack by Iranian drones this morning.”

US Citizen Released in Latest Prisoner Exchange between Ukraine and Russia
The White House confirmed that a US citizen was released from Russian detention following another prisoner swap between Moscow and Kyiv.

“I can confirm that a US national has been transferred as part of a transfer between prisoners between Russia and Ukraine today,” National Security Council spokesman John Kirby told reporters on a conference call, according to NBC News.

“We certainly welcome that news. But for privacy reasons, I can’t go into any more detail about this individual,” he added.

Earlier in the day, Andriy Yermak, the head of the President’s Office of Ukraine, said on Telegram the exchange consisted of 64 Ukrainian soldiers who were captured in Donetsk and Luhansk, and an American named Suedi Murekezi.

Backlog of 82 ships waiting to transport crops from Ukraine
The organization overseeing the export of Ukrainian crops said that there is a backlog of 82 vessels waiting to be loaded with cargo.

Since the deal was signed, more than 545 ships carrying 13.8 million metric tons of grain and other food products have left for destinations around the world.

Kyiv has previously blamed Moscow for holding up inspections and delaying vessel movements.

Russia says no ‘Christmas ceasefire’
Moscow has said no Christmas ceasefire is on the cards after nearly 10 months of war in Ukraine.
The two sides are not currently engaged in talks to end the conflict, which has killed tens of thousands of people, displaced millions more, and turned cities to rubble since Russia invaded its neighbor on February 24.

Ukrainian President Volodymyr Zelensky said this week Russia should start withdrawing from his country by Christmas as a step to end Europe’s biggest conflict since World War Two. Moscow rejected the proposal outright, saying Ukraine must accept the loss of territory to Russia before any progress can be made.

The 27-nation bloc awarded the “brave people of Ukraine” the prize in October. Yulia Pajevska, founder of the medical evacuation unit Angels of Taira, human rights activist Oleksandra Matviichuk and Ivan Fedorov, mayor of the occupied city of Melitopol, were on hand to receive it during a solemn ceremony in Strasbourg, France.

“We have witnessed the inspiring resistance of ordinary citizens making the ultimate sacrifice to delay a column of tanks, senior citizens standing up to face down Russian troops with nothing but pride as their weapons. Brave women forced to give birth in underground metro stations,” said European Parliament President Roberta Metsola.

“To these people, the message from Europe has been clear. We stand with Ukraine. We will not look away,” she said.

The EU award, named for Soviet dissident Andrei Sakharov, was created in 1988 to honor individuals or groups who defend human rights and fundamental freedoms. Sakharov, a Nobel Peace Prize laureate, died in 1989.

Donors gather in Paris to get Ukraine though winter
Dozens of countries and international organizations threw their weight and more than 1 billion dollars in aid pledges behind an urgent new push to keep Ukrainians powered, fed, warmed and moving as winter approaches.

An international donor conference in Paris quickly racked up substantial promises of financial and in-kind support, a defiant response to sustained Russian aerial bombardment of critical infrastructure that has plunged millions of Ukrainian civilians into deepening cold and dark.

More military aid is also on the way. US officials said the Pentagon is poised to approve sending a Patriot missile battery to Ukraine, agreeing to an urgent request from Ukrainian President Volodymyr Zelensky who is desperate for more robust weapons to shoot down incoming Russian weapons.

The approval is likely to come this week, said three officials, who spoke on condition of anonymity because the decision is not final and has not been made public. Providing Patriot surface-to-air missiles could mark an escalation in the conflict.