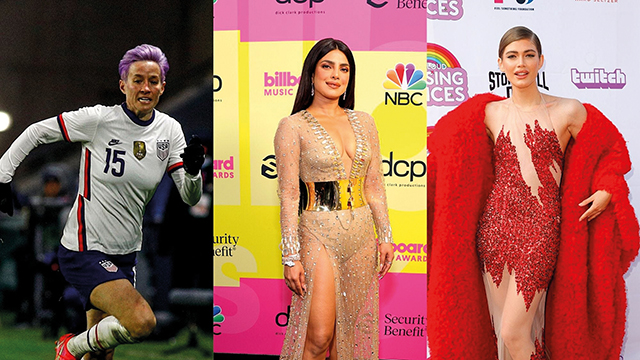 The enticing supermodels, with cute faces, eye-catching bodies and learned manners, count no longer: the business wants them out. Image source: usatoday

In the still patriarchal world, modern feminism, being as perseverant as it seems to be, is persistently making its way into every walk of life. This piece is not meant to define feminism as a good or not movement, as striving to establish personal, social, political and economic gender equality is not my job to do! I only wonder how vigorously it operates to solidify the female place in our lives, or to strengthen the female word in the formation of opinions around the globe in general.

I could not believe my eyes when I read into a recent series of articles about the famous Victoria Secret’s decision to rebrand the company for ‘female empowerment’. Frankly, looking at the feminine part of Georgia’s population, I get the impression our culture needs male empowerment more than female. I apologize for my slightly facetious evaluation of men, favoring our mothers, wives, sisters and daughters, who are playing an increasingly growing part in the country’s economic progress and in shaping the nation’s future.

Speaking about economy, the entire world is suffering, including the garment giant VS, which, like others, is doing its possible best to survive. How interesting that a feminist evaluation of the current business situation is playing out like a serious helper! The decision triggered some tongue-in-cheek comments about this peculiar way of promoting the feminist cause. It also created curiosity as to whether this unexpected step could save the failing business or not. In an aggressive attempt to drastically transform the marketing style, the company fired its old bunch of world-renowned angels to welcome a totally different group of female celebrities to promote the brand, among them famous soccer stars, skiers, technology investors and actresses. All of them are well-known and well-to-do public figures who would hardly ever think of participating in lingerie modeling auditioning sessions. In a word, the technique of choosing a model has been totally reversed, with the firm itself looking for them, and asking them to come and help create an absolutely revamped female image to promote the renovated practice of using a female body for fashion industry purposes.

I cannot recollect among the fashion world any such operational ventures: daring, up-to-the-minute and ground-breaking. The enticing supermodels, with cute faces, eye-catching bodies and learned manners, count no longer: the business wants them out, making way to welcome the already established positive images, publicly recognized brilliance and previously deserved fame of the accomplished women.

Something is changing in the fashion approach, and the change is very attractive. Whether it works or not, the attempt is doubtlessly challenging and might make an example for others to follow.

On top of all those risky undertakings, the company also made a statement about the refreshed board of directors, with six ladies out of seven members. I would not be surprised if someday the directors too find themselves on the podium. Why not? 21-st century fashion manners are going to be unrecognizably differing from what we have already seen in this popular industry.

Listen to what the firm’s chief executive Martin Waters said in his recent statement: “This is an exciting time for all of us at Victoria’s Secret. The progress we have made over the last year underscores our commitment to driving profitable growth, creating new opportunities for our talented associates and evolving our brand and product to reflect the diverse experiences, passions and perspectives of our customers.”

I could not have missed the opportunity to use the VS example for its sense of progress, which defeats any accidental failure and drawback caused by wars, earthquakes or pandemics. There might be other examples out there like this one, but VS came handy at the moment. I don’t care whether it serves feminism or any other political movement. It just serves all of us to eschew failure.