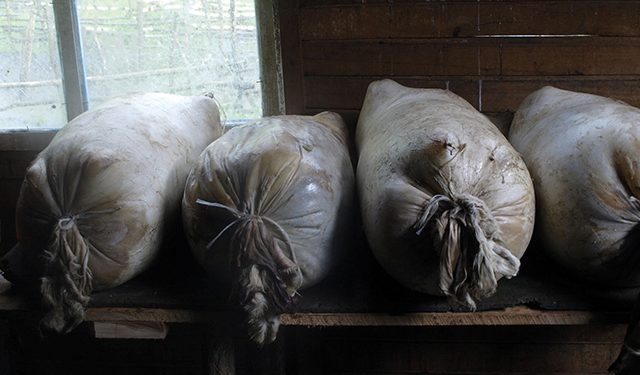 For many, cheese is an unquestionable addition to the evening dinner table. Many others consider it a welcome ingredient for soups, salads, sandwiches, and a multitude of other options. Regardless of the form in which one prefers to consume this historical creation, its unique connection to the mountainous region of Tusheti is extensive.

Tushetian cheese is a formidable variant made by a formidable people in some of the most punishing territory of the region. Its notorious smell is enough for locals to easily identify its presence, and the strong taste is either adored or abhorred by those who taste it.

In one remote farm, accessible only by horse during most of the year, they make their cheese in the traditional way. Unchanged through centuries, this method involves techniques that many would not recognize. The brutal realities of life in the wild mountains of this region are incorporated in the process, as traditional methods are not for the faint of heart.

To attend this cheesemaking event, one needs a capable steed, a hardy saddle, and some skill at horsemanship- and so the first stop is a stables. Along with a pairing with a suitable mount, the owners of the horse farm briefly school the new riders in the fundamental skills of riding.

With this completed, the journey through the steep mountain pass begins. Some of this journey takes the adventurer along paths no wider than that of the horse’s own hoof. The way winds through a steep valley with only a river at its lowest point to break the natural silence. It’s not until almost an hour into the journey that the pathway lowers into the valley and levels to the nearby terrain. It then opens into a vast plain.

The plain has a multitude of livestock, docile and grazing as the riders approach the camp. The construction alludes to the nomadic lifestyle these hearty men live: Timber frames and tarpaulin coverings cover the complex of buildings used as habitation, storage, and cooking structures that make up the camp.

For four months of the year, these men come out with their flocks of sheep and cattle to raise them and make their prized cheese. Bringing with them everything they need, they live in this wilderness, surrounded by mountains, old towers, ancient village ruins, and grassland valleys. In preparation for dinner, they bring a lamb for slaughter for the incoming guests.

The meat is piled into a pot, mixed with their own homemade wine, and set over a fire. Meanwhile, the cheesemaking process begins in another special portion of the camp’s buildings. One man, the designated cheese expert, stands over a barrel of white liquid. It is here the journey begins.

First, he mixes the enzymes together in the liquid, forming a solid piece that is the early formation of cheese. This is repeatedly stirred and the excess fluid is removed. The solids are set into a basket lined with cheesecloth and squeezed so as to remove any excess moisture. The removed liquid is often separated, fermented and drunk as a form of beverage similar to that of the Central Asian Koumiss.

Meanwhile, the aforementioned slaughtered sheep’s skin is trimmed of its excess hair, then inverted and stitched closed to form a sack. The trimmer then blows into the sack, inflating it and clearing it of any imperfections. After washing the sheepskin in the white cheese fluid, the firm cheese is loaded into the sheepskin. These loaded sheepskins are stored to allow the cheese to cure and set before being sold at a later date.

Returning to the cooking section of the structures, the men begin to indulge in the roasted lamb and wine. Along with the voyagers, the afternoon consists of shared stories huddled around the fire. Cheese, wine, and roasted meat fill the aroma of the small tarpaulin structures as rain gently peppers the exterior. Upon the end of the festivities, the visitors bid farewell to their hosts, and mount their rides once again.

Leaving these semi-nomadic ranchers, one can only imagine the life they lead. Staying true to a centuries-old tradition, they are some of the last remnants of a life long forgotten. Separated from civilization by miles of dangerous and often impassable roads, these mountaineers are a unique link to the region’s history and traditions.