Tripwires and the Power of Deterrence 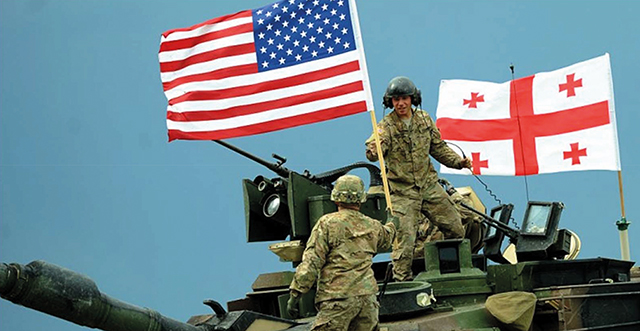 Georgia’s storied history of cooperation with NATO is a common point of national pride. In addition to the substantial deployments of their soldiers on the NATO mission in Afghanistan and service in Central Africa, annual training exercises continually expand the Georgian Defense Force’s capabilities. However, Georgian sovereignty is still threatened from an emboldened Russian threat. The presence of a “tripwire” NATO force in the country has been touted to be a potential solution and guarantee of sovereignty.

However, tripwire forces have to be correctly assembled to be effective in this regard.

While certainly not a new military and diplomatic idea, they have been used to great effect, and also resulted in disaster. Even in the 20th century, they have failed to catastrophic effect due to a lack of being any substantial deterrent. Possibly the most famous example of this is the British expedition into Belgium as a deterrent to German aggression. As the British Expeditionary Force discovered, the “kind words” guarantee of security must be complemented with the actual ability to carry this out.

Part of this, however, is that the tripwire force has to comprise a large enough contingent to actually trigger a response. Small units stationed in key terrain and avenues of attack clearly stand no chance in the event of a large-scale invasion. Should the attacker launch a fait accompli invasion, the speed with which this is accomplished may influence the tripwire force nation to simply accept the territory loss. In lieu of a large-scale war, the nations will settle and attempt to engage in diplomacy.

In addition, the cultural values of the nations involved in the defense may dictate that the premise of revenge is not worth starting a war over. Nations such as the United States and some Eastern countries, which hold pride and honor in generally high regard, would be far more willing to enter a protracted armed conflict. However, some European nations may not be willing as a people (or financially able) to engage in such a broad conflict. NATO, being composed of both entities, needs to ensure that those involved in an adequate tripwire force are committed to the mission.

A 20th century example of both a successful and failed implementation of a tripwire force took place in the wake of the Second World War on the Korean peninsula. In this instance, the difference in American force size and composition was imperative in the attack plans of the North Korean military. The North’s leader, Kim Il-Sung, had his vision of the unification of Korea as his key priority. Imperative to accomplishing this goal was Soviet assistance, as it would be required for the military campaign in the south. In conversation with the Soviet leader Joseph Stalin, Kim managed to elicit his interest. Stalin viewed it as an opportunity to further Soviet communism in the East, and establish dominance over the expanding Chinese.

However, in the early strategic discussions, Stalin raised the issue of the American military presence. With American forces numbering around 20,000 in 1949, along with the South Korean military comprising an additional 60,000, Stalin declined, the expressed reason being that the involvement of this sizable a tripwire force would make any invasion very unpalatable to Stalin’s need for a fait accompli victory.

The next year, with the drawdown of American forces in the region, Kim again made his request to the Soviets. With North Korean intelligence suggesting American numbers to be around only a few hundred to a thousand, Kim was this time able to secure Stalin’s support. The ensuing war would pull in American and United Nations forces against a North Korean, Soviet, and later Chinese military. In the end, with millions of civilians and soldiers killed or wounded, little was accomplished besides a heavily militarized border still manned today.

While it may be a politically uncomfortable solution to station such a large number of troops in a foreign country, it’s not something new. The United States and other forces have located bases around the world, in close cooperation with their host nation. While not all of these fall into the tripwire category, they provide the region with some measurable element of security. Germany and Poland are the more recent examples of a symbiotic relationship between two friendly nations. Particularly, in Poland and the forces deployed on training missions in the Baltics in a NATO Reaction Force.

Much has been written about the prospect of a NATO installation or semi-permanent partner force being kept in Georgia. However, the majority of the purpose surrounding this is for bilateral training and partnership. A force meant for these reasons would not be able to conduct itself in an invasion as would a purpose-built tripwire force. The implementation of a proper tripwire force would take considerable time to organize, develop, and ultimately install. Considering the numbers involved, preparing just a battalion (about 500-700 soldiers) or even brigade (1000-1500 soldiers) is not something generally done in short order.

If Georgia is interested in an insurance policy for its sovereignty, then a NATO tripwire force would be a complex but rewarding solution, particularly for the long-term life of the nation. Russia generally only respects strength, and deterrence against another invasion or land grab would have to come in this form.

Admittedly, the garrison of a sizable foreign force would come with real estate issues, an adjustment phase for the population, and some complex political maneuvering internally. However, to gamble with independence is always an unsavory and even dangerous way to live as a free nation.