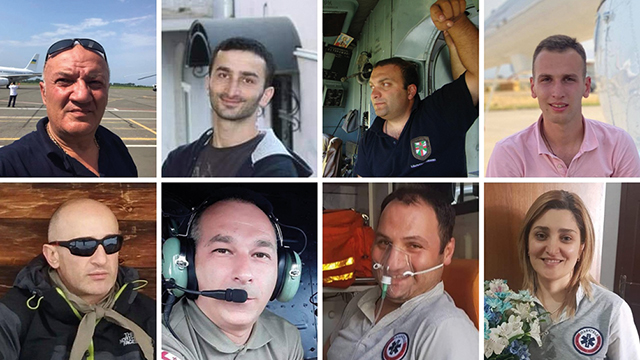 A helicopter belonging to the Ministry of Internal Affairs and the Border Police lost control and crashed during a rescue operation for paragliders who fell in the mountainous Georgian resort of Gudauri on July 29. Eight people were in the helicopter. Soon after, Interior Minister Vakhtang Gomelauri confirmed that all eight had died.

“In the vicinity of Gudauri, during a paragliding flight, two people collided with and fell down the slope of the mountain. A helicopter belonging to the Border Police was involved in the rescue operation, but it lost control and crashed,” the statement of the Ministry of Internal Affairs reported.

The Minister announced that the foreign tourist who was flying with the paraglider pilot also died. The rescue operation was being carried out in order to save that tourist. The injured Georgian paraglider pilot was later taken to the hospital by ambulance.

“I would like to express my deep sorrow for what happened, and to express my condolences to the families of the victims,” Minister Gomelauri said. “It is very hard for us, for everyone, especially for the families, their friends, the Ministry of Internal Affairs. Six of those who died were our employees.”

He added that the regulations on paragliding flights should be tightened or the sport banned altogether, and that, for the time being, flights would be suspended.

Due to the tragedy, July 30 was declared a day of mourning for Georgia.

Later that day, in response to media reports and a whirlwind of posts on social media, the Department of Strategic Communications of the Ministry of Internal Affairs released a statement, noting that “It is unfortunate that we have to publish this in light of the tragedy, but it is better for the general public to hear verified and accurate facts.

“The pilots and flight technicians on board the helicopter, Colonel Zaza Loria, Lieutenant Colonel Levan Chokheli, Major Dimitri Kaadze and Lieutenant Andro Kujoshvili, were high-level professionals in their field. The flight was being controlled by Colonel Zaza Loria, the Deputy Head of the Main Department of Special Purpose Aviation of the Border Police of the Ministry of Internal Affairs, who has been a pilot since 1992 and has commanded a helicopter squadron for many years. Under the leadership of Colonel Loria, many difficult rescue operations were carried out, and he saved many lives.

“At the base of the Main Division of Special Purpose Aviation of the Border Police, helicopters are inspected in detail before each take-off, and it is not allowed for pilots to start and fly a technically defective helicopter.”

The Department noted that in 2019-2022, the Air Park of the Border Police was fully updated, which means that all helicopters are regulated, maintained, and updated.

They highlighted that in March, the Border Police, in full compliance with Georgian legislation, on the basis of the government’s decree, in accordance with the international rules of aviation safety and the manual of aviation technical services, purchased and installed two new sets of tail screws for the two Mi-8 MTV-1 type helicopters on the balance sheet of the Border Police.

“We would also like to make a clarification regarding the two Super Pumas in the balance of the Border Police, which were purchased in 2011,” the Department announced. “They were bought without the necessary equipment for rescue functions, and this is why they cannot be used in search and rescue operations (for evacuating people or extinguishing fires). In particular, one of the Super Pumas was made to order with a high-class interior and design, and is used only for the transportation of high-ranking officials. The Mi-8 helicopter is used in search-rescue and rescue operations as it is equipped with special rescue inventory.

“And for further clarification, stories that the Super Puma is stuck in the Kakheti region are false. The Super Puma has been moved from the Lagodekhi defense section and is being deployed at the base of the Main Division of Aviation for Special Purposes.

“Finally, only the best, high-level professional pilots and flight technicians work in the Special Purpose Aviation department of the Border Police, and they undergo special training twice a year,” the statement concluded.

The public funeral of the deceased rescuers and medics took place at the Sameba (Holy Trinity) Cathedral in Tbilisi on August 2.

Garibashvili emphasized his close acquaintance with the pilots in particular.

“We have lost our country’s worthy sons and daughters, our country’s citizens, crew members and rescuers, and exceptional pilots, honorable people, with whom I was closely acquainted. We traveled together frequently over the years. Once again, I extend my sympathy to their families, our society as a whole, and to the Ministry’s leadership and staff, each and every employee, as well as to the families of the deceased medics. It is an enormous tragedy that has left us all devastated.”

The President of Georgia requested that those who died during the rescue operation be awarded the State Medal for Civic Dedication.

An investigation into a possible violation of air transport operation rules was started immediately, and is being conducted under Article 275 of the Criminal Code of Georgia.