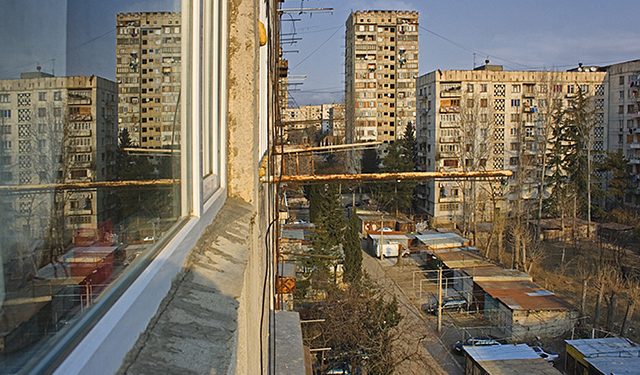 I grew up in towns and cities, not farming or working land at all. By the time I was 4, I had lived on three continents; by 30, had lived in 30 different houses, counting them up. My father, building power stations, took us from the UK (birth) to Canada to Zimbabwe and back to Canada. Then I struck out on my own, age 22, and discovered even more of the world. But all of this was in urban dwellings, from a few thousand to five million in population. That definitely makes me a town mouse at heart.

The 15-year stretch I lived in Svaneti was rather a detour from these averages, but a significant one in that it showed me how country mice live, and I mutated into one myself, at least partly. But now I’m back in Tbilisi for at least a winter, and up for comparisons between these two lifestyles.

I didn’t even know how to use a hoe properly in Svaneti! But I warned my wife against getting too exasperated with me, reminding her how proficient she was NOT on the computer and how patient I was with her. So I learned digging, planting, weeding, raking, scything (this poorly), watering, pruning, picking, milking, and so much more to do with our bit of field and our livestock.

Infrastructure, there, had unique challenges, some interlocked. I realized that water flow into the house must not be dependent on electricity, as in pumps, because the fickle power’s outages would then also deprive you of the water, and maybe even of the pump itself, leaving you in a real bind. Better stick to gravity for water flow, if at all possible. We still have not had a single winter without water pipes freezing at least once. This can be most exasperating.

Instead of having to go shopping, my wife and I brought the shop into our village home. But we also stocked up on anything we might need for repairs and renovations: nails, screws, myriad plastic plumbing parts, plywood, planks, sheet metal, tools hand- and power-, cement, sand, gravel, glues, welding electrodes, rope, string… Because if you had an emergency, better to have the solution at hand rather than having to drive at least the 30 km to Mestia, at worst the 110 to Zugdidi, to solve it.

Here? A 24/7 Nikora shop sits right under our 2nd-story apartment. Not the cheapest, but Always On, should midnight cravings ensue. Across from it is a EuroProduct, next to that a PSP pharmacy, and nearby a Spar and a Clean House shop. There’s a renovation bazaar two minutes’ walk away, with about 30 shops in it, and it’s also crowded with handymen of all stripes and skillsets, ready to walk home with you and check out whatever problem you might have. SO convenient.

The City Mall on Vazha is four minutes’ walk away, with its boutiques, food court, and cinema showing current films both in Georgian and English. Public transport, above and underground, awaits your beck and call. Our neighborhood is blessedly about as quiet as… the one in Svaneti (no nearby barking dogs either, or crowing roosters for that matter), so this is one area in which the two regions quite coincide.

We have not an inch of land to play with here, until we buy some window boxes for herbs or flowers or whatever. Snow will hardly touch us here, most likely, whereas there it encroaches halfway up 1st floor windows and covers the top step of entrance doors.

Driving could be terrifying, but somehow my town-mouse years have kept me fit for it, not fazed at all, even at night in the rain. I need to persuade my glaze-eyed wife to learn this art too, but one hurdle at a time. Negotiations are underway.

When we lived there, we missed everyone here; now we miss all our Svan neighbors, but are catching up with our fellow town mice in depth. Cultural events and venues beckon at every turn, from galleries to festivals to the aforementioned cinema, and symphony and ballet and opera and live theater and restaurants and parks.

And we’re not any longer, literally, the only shop in town.