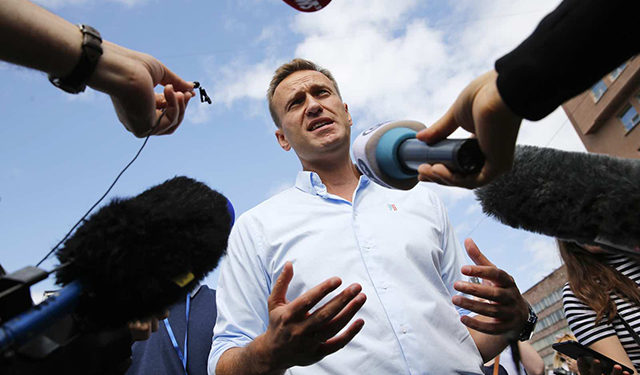 The Navalny Odyssey goes on, and with the Russian opposition leader detained and facing 3.5 years in jail, tens of thousands of Russians took to the streets to protest. Needless to say, the Russian police responded in trademark fashion: a massive crackdown that ended up with more than 3000 protesters detained. What’s next for the Russian Patient? What should the West, the Kremlin, and the lesser actors of Near Abroad expect from the man who, for many, is shaping up to succeed the current Tsar on the throne? The Georgian Institute for Security Policy spoke to Marc Bennetts, Times Correspondent in Moscow, on Navalny’s arrest and its implications.

How big a thing is Navalny’s arrest in the West, and in Russia itself?
It has obviously pushed his international standing to unprecedented heights. I don’t think he’s quite a household name in the West, but he’s getting there. Newspaper headlines used to call him a Kremlin critic or Russian opposition leader; now they name Navalny as if they expect you to know who he is. That’s always an indication of how famous someone has become, and obviously, this newfound portion of his fame dates from August when he was poisoned with novichok. Being poisoned with novichok is always a good headline, always a good way to ensure someone becomes famous internationally. Within Russia, both his poisoning and his return have not been covered much by state media: in some talk shows they’ve mentioned him, but usually along the lines of “he’s a traitor to Russia, he’s a pawn of the West. Vladimir Soloviov called him nazi scum. But it’s big news here as well, one that the state media tries to downplay as much as it can.

Has his stature grown in Russia?
It’s difficult to say with Navalny, because Russia isn’t a democracy in any way; it pretends to be a democracy, but it’s obviously not genuine, so how do you judge his stature? How do you judge his popularity? We can do it with opinion polls, in which 2% of Russians said they would vote for him to be president. But then his supporters point to the fact that 2% of Muscovites also said they would vote for him to be mayor before he was allowed to run an election campaign in 2013 for mayor, and yet he gained almost 30% of the vote officially, amid rumors that the vote was rigged. One thing is clear: his investigations into corruption are massively popular, I mean more than 85 million people have seen his latest video about Putin’s Palace.

How will that video affect the sacred Russian myth about Putin being the great leader that has no interest in material wealth, and that he’s only primarily preoccupied with bringing greatness to his nation?
Again, it depends on who you are. For opposition supporters watching it, it’s nothing new. They’ve never questioned the narrative that Putin is corrupt and massively obsessed with wealth. For Navalny, the main question is for how many Putin supporters or people who are wavering will it prove a tipping point when they see this display of massive wealth. Not even just massive. It’s hard to describe. There’s a joke going around in Russia now that Gelenjik has been discovered in Putin’s Palace. It’s unprecedented levels of wealth.

Is Navalny perceived as a potential herald of change? If he were to succeed, would change come to Russia?
There’s already a significant number of Russians who feel that Navalny is a potential successor to Putin, and who would like to see him succeed Putin, and I think we can judge how threatened the Kremlin feels by the mounting attacks on him. Parliamentary Speaker Volodin said recently again that Navalny is a pawn of western intelligence, that he was sent to interfere in Russia’s elections. I think the Kremlin feels threatened, I mean you don’t send a massive contingent of riot police with dogs to meet a mere blogger at the airport. It’s obvious they’re spooked.

The call he made to one of his would-be assassins, which the man actually answered, doesn’t exactly flatter Russia’s secret services, does it?
I think it underlined how unprofessional they’ve become. There’s always been this image in the West of ultraprofessional, cold-hearted FSB/KGB killers, and, in the end, it turned out to be a guy living in this not particularly nice area of Moscow in a not particularly nice flat, who was sent around the world to smear a deadly nerve agent around his underpants. It does reveal a degree of degradation in the Russian security services. The FSB agent that Navalny spoke to was pitiful, and he would never have been able to have an operative role in the KGB.

How has the Western image of Navalny changed since the poisoning?
Well, he has support in the West. We’ve seen quite a few editorials this week staying that “bravery like this needs to be supported by the West.” So far, there hasn’t been much examination of his nationalist past, though, which I think is starting to happen now, and will emerge if he ever looks genuinely like toppling Putin. I think the most Navalny can hope for at the moment is people power forcing his release, which would be a massive victory for him and his team.

Can it translate into more robust sanctions against Russia? Can we expect some sort of Navalny List, or do you need to die to have your own Magnitsky List?
The Biden Administration has indicated that it’s going to take a tougher position with Russia, and it’s highlighted that the Navalny case is part of this. So, I guess anything is possible. Just recently, one of Navalny’s allies in London published a list of eight people he said Navalny wants to see the West impose serious sanctions on, which included people like Abramovich and Usmanov, and this considering the former is already not allowed to live permanently in Britain anymore.

Could things like the Nord Stream pipeline figure into this equation? Could more scrutiny of Russia, Navalny’s becoming much more prominent and so on, have a bearing on the pipeline project?
The pipeline project is almost finished now, so sanctions would basically involve turning the taps off, which would be a big step for Germany. It depends how serious a signal they want to send the Kremlin.

Regarding that nationalist part, it’s safe to say that neither Georgians, Ukrainians nor Moldovans have forgotten Navalny’s comments on the post-Soviet conflicts. Is he a changed man now?
Specifically about Georgia, he said not so long ago that he regretted the offensive terms he used to describe Georgians. He said he regretted those, but he hadn’t changed his opinion on the war. I mean, he certainly has a nationalist past, and he has expressed objections to Putin’s foreign adventures, but not on moral terms. He didn’t say “we shouldn’t be bombing Syrians because it’s bad that women and children die,” he said “we shouldn’t be bombing Syrians because it costs too much and we should be fixing our roads in Voronezh or someplace else instead.” To be fair, foreign policy is something he really hasn’t spend much time on, because it’s not really relevant at this point. I mean, he’s not going to take power next week. Then again, when asked a few years ago what his ultimate aim for Russia was, he said he would like it to be a vast kind of “incomprehensible Canada.” He’s in favor of a Western system of government, and he’s also said that he doesn’t consider NATO to be a threat to Russia, which is obviously a very radical departure from what the Kremlin is saying.