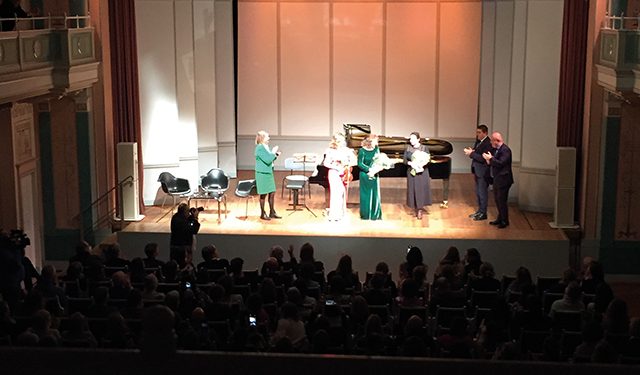 To mark the 30th anniversary of the resumption of Georgian-German diplomatic relations, the Federal Foreign Office, in cooperation with the 13 Horizons Culture Program, organized an elegant soirée at the Berlin Concert Hall, inviting exceptionally talented Georgian women artists: musicians Dudana Mazmanishvili and Lisa Batiashvili, together with writer Nino Haratischwili. Germany’s role during these three decades has been of great importance for the formation of Georgian civil society and cultural as well as scientific exchange. Numerous scientists, authors, artists, sportsmen, politicians, diplomats and thinkers, after studying in Germany, have contributed to the country’s development and laid important milestones in Georgian-German relations.

In this context, three artists who live and work both in Germany and in Georgia presented a diverse program. Nino Haratischwili read from her novel “The Lack of Light”, which traced the friendship of four women against the backdrop of Georgia’s recent history. Lisa Batiashvili on the violin and Dudana Mazmanishvili on the piano enchanted their audience with a repertoire ranging from Georgian compositions to classics by Bach and Brahms to film music. Apart from the amazing performances by Dudana Mazmanishvili and Lisa Batiashvili this, one of the main highlights of the evening was the conversation between these three outstanding women artists about the years they spent in Germany and how this period of time transformed their lives. As the writer Nino Haratischwili put it, there is no such thing as a strong women because this would mean that there are lots of weak women, which would be untrue, especially referring to Georgian women who endured wars, political instability and severe economic and social crisis throughout the last 30 years after the fall of the Berlin Wall and the end of the Soviet era. The audiences had this unique opportunity to follow the lives and experiences of these three outstanding women artists as they conversed and remembered it: the early years they spent in different German cities and in Berlin from the early 90s upto now, the various stages of their artistic careers which are stories of human effort and endeavour with disappointments, obstacles, hopes and success. For those who experienced Tbilisi in the 90s during the unprecedented economic crisis, resulting in electricity cuts, blackouts and collapse of heating systems with ravaging effects on cultural and social lives the excerpts from Nino Haratischwili’s novel “The Lack of Light” that she selected for reading on this festive occasion brought mixed memories of nostalgia and déjà-vu.

Nino Haratischwili, born 1983 in Tbilisi/Georgia, is an award-winning theatre writer, director and novelist. Her great family epic “The Eighth Life (For Brilka)”, translated into 25 languages, became a worldwide bestseller; a major international film adaptation is in preparation. Her work has won many awards, including the Anna Seghers Literature Prize, the Bertolt Brecht Prize and the Schiller Memorial Prize. Her novels “The Cat” and “The General” were shortlisted for the German Book Prize 2019. Her new novel “The Lack of Light” has already been sold in 15 countries before its publication.

The award-winning Georgian-German violinist Lisa Batiashvili has performed with some of the world’s finest orchestras, conductors and soloists. Batiashvili is the artistic director of the Audi Summer Concerts in Ingolstadt. For the 2020 festival, she designed a program to celebrate the festival’s 30th anniversary as well as the 2020 Beethoven Year, themed ‘Lights of Europe.’ She regularly appears on stage with orchestras such as the Berlin Philharmonic, the Vienna Philharmonic, the Royal Concert Orchestra and the Boston Symphony Orchestra. As an exclusive artist of the Deutsche Grammophon, Lisa Batiashvili released the album “City Lights” in June 2020.

Dudana Mazmanishvili, born in Tbilisi, received her first piano lessons from her mother at the age of three. Her extraordinary virtuosity, which never becomes an end in itself but always puts itself at the service of the music, has been awarded prizes at numerous piano competitions, including the Busoni Competition in Bolzano, the Washington International Piano Competition and the Nicolai Rubinstein Competition in Paris. Dudana Mazmanishvili performs mainly in Europe and America. At the invitation of Daniel Barenboim, she played a recital at the Ruhr Piano Festival, which was also broadcast by Deutschlandfunk. Her two CD releases have been singled out by the specialist press as outstanding works. In addition to her concert performances, she is a diplomat, member of the European Cultural Parliament and the founder of the international Tbilisi Piano Festival.

PM: We stand with people of Turkey and are ready to provide any assistance needed 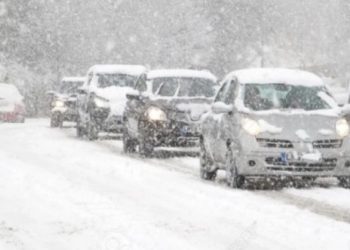 Due to expected snow, Tbilservice Group urges residents to be careful