Thoughts on the War 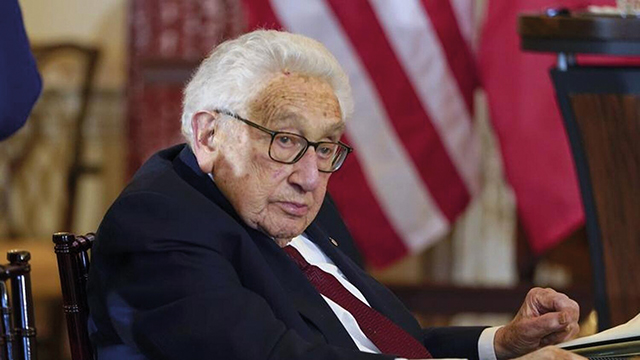 Henry Kissinger: “A peace process should link Ukraine to NATO, however expressed. The alternative of neutrality is no longer meaningful.” Source: AP

The war is still raging in Ukraine, but nobody is sure about the name it will go down in history with: Russian-Ukrainian, Russian-Western or Russian-American. The only sure thing about it right now is that it is happening in beautiful Ukrainian land, torn and devastated as it is, and is being fought with the hands of Russians and Ukrainians, longtime ethnic and religious twins. The entire world is thinking about this conflict this or that way, but nobody has an instantaneous solution that might start saving lives in this cursed turmoil, including the lives of Georgia’s own sons, who have opted to battle shoulder-to-shoulder with their Ukrainian fellow combatants, inspired by various understandable objectives. The frequent wordy statements that we hear from Western, Russian and Ukrainian politicians and analysts are so contradictory, that their ambiguity creates insurmountable doubts in our heads, depriving us of a chance to make any logical conclusions or do some independent reasonable analysis.

It is said that the Biden administration is finalizing plans to send the Patriot missile defense system to Ukraine, and Germans are getting ready to ship their Leopard tanks in the same direction. This means that the West has finally made a decision to strengthen Ukraine with the long mediated for and long-awaited military power. The delay has been justified only due to the fear of escalating the conflict into a wider-scale war, moving it beyond the boundaries of its current theater. The predominantly prevalent sentiment all over the world is that Ukraine should win it. Yet, while the Ukrainians confidently nurse the idea of taking back all its occupied lands, there is no clear view of the finale out there. Some experts are sure that a full Ukrainian victory is almost impossible to imagine at this time. It is also said that a lot depends on the way Ukrainians behave along the frontline, as well as in their relationships with the West, because without Western support, Ukraine can fall victim to the conflict at a moment’s notice. The dependence of Ukraine on Western aid is overwhelming, and the Western readiness to provide that aid is crucial. That’s why any delayed shipment of armaments is equal to catastrophe for the Ukrainian armed forces, but it seems the West has finally realized that they are faced with an existential threat not only to Ukraine but to the entire free world too.

The shadow of the Second World War, seen in the current actions in modern Ukraine, becomes more and more imposing, telling the Westerners that the possibility of wars anywhere in the world, including in their territories, affecting the idyllic serenity of their lives, has not vanished at all. And this is scary! Hence the grand wakeup in the West, expressed in their preparedness to go for real in terms of maximized supply of Ukraine with some game-changing weapons. Another question is if Russia ever succumbs to the destructive power of those arms, soon expected to arrive where the adversities are on the rise between the warring sides. One expert made an almost oxymoronic comment that Russia has to suffer a defeat in order for her to become a better place to live.

One of the most prominent political writers of our time, Henry Kissinger, is urging a negotiated peace in Ukraine to reduce the risk of another devastating world war, but the Ukrainian leadership qualifies the outstanding expert’s proposal as a direct attempt to appease the aggressor, commenting that there could be no deal that envisages the possibility of ceding any of the previously seized territories. Says Kissinger: “A peace process should link Ukraine to NATO, however expressed. The alternative of neutrality is no longer meaningful.”

There is also a lot of hearsay about World Cup organizer FIFA’s rejection of a request from the Ukraine President to deliver a message of world peace ahead of the tournament’s final in Qatar. Could this be symptomatic, on top of a myriad of other thoughts that pop up for reflection in this war time? What happens if Russia and Ukraine never agree to talk, the West continues sending modern armaments to keep the war going, Russia continues taking out vital Ukrainian infrastructure, and the world remains impotent to promote the peace process? Most importantly and perilously, what if the Western united military effort pushes the beleaguered Russia into a corner? Not even the world-level united think-tank will answer this question any time soon, and not because they are not qualified enough, but only because the entire world is at a loss, having only questions without answers.