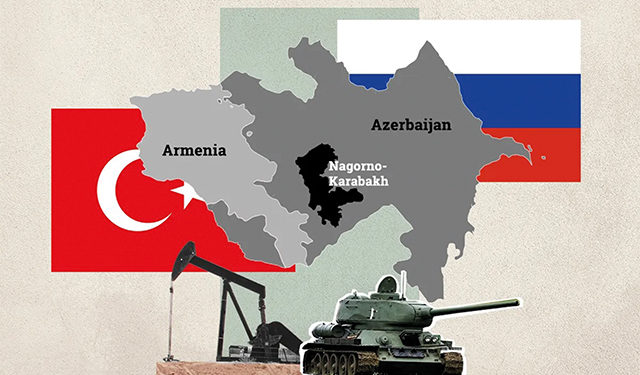 Turkey’s very vocal and active support of Azerbaijan cuts at the very essence of Russia’s role as a regional arbiter. Image source: gzeromedia.com

A special case for the study of Russia’s evolving approach toward territorial conflicts along its borders is the Nagorno-Karabakh issue. The long-standing Armenia-Azerbaijan conflict, in which Russia has never been militarily involved but has indirectly been in its orbit, is now under the Kremlin’s direct geopolitical influence. Russia’s decision to send some 2,000 peacekeepers to the conflict zone represents the existing pattern of Moscow’s geopolitical approach to the territorial conflict. Although Russia has long been the guarantor of order in the South Caucasus, Azerbaijan’s recent military success in and around Nagorno-Karabakh has presented Moscow with a major challenge. Its approach of maintaining the post-1994 status quo between the two South Caucasus rivals is clearly no longer sustainable, and a new reality, reflecting a new balance of power with another power, Turkey, has emerged.

Russia found itself boxed out of easily influencing future outcomes in the region, a moment which has been a long time coming. Azerbaijan has raced far ahead in the regional arms race, managing to purchase high-tech weaponry from Turkey and Israel, all the while successfully quashing any attempts by Nagorno-Karabakh to gain international recognition. Moreover, the 2016 four day “April War” over Nagorno-Karabakh can in retrospect be seen as Azerbaijan testing out what it already judged to be its growing military superiority. Although the conflict did not lead to any major territorial adjustments, Armenia clearly saw itself as the loser, with President Serzh Sargsyan firing several top generals in its aftermath. At its conclusion, Russia managed to play its traditional role of arbiter, with a ceasefire negotiated in Moscow. Additionally, although Russia has been selling arms to Azerbaijan, its leverage over authorities in Baku has been in decline, while the Turkish influence has been on the rise. Therefore, Moscow faced a somewhat similar dilemma to what it witnessed in other regions: the emergence of another power gradually eating at Russian regional standing. Elsewhere, it has been the collective West; in the case of Nagorno-Karabakh, it is Turkey.

In the 2020 war, the territorial gains made by Azerbaijan are a concrete manifestation of the growing military imbalance that had already been apparent during 2016 clashes. And this time around, Russian attempts at brokering some kind of a lasting ceasefire in Moscow were patently ignored by troops on the ground. Indeed, faced with a territorial fait accompli, Russia felt tempted to openly legitimate Azerbaijan’s gains rather than appear even more powerless. Such a move, however, could come with costs to Russia’s clout within Armenia. As a full member of the Collective Security Treaty Organization (CSTO), Armenia expected Russian aid should its territorial integrity come under direct threat. But given that Nagorno-Karabakh is not even officially recognized by the Armenians themselves, Russia is not treaty-bound to intervene. Nevertheless, Russia did not make a move for weeks. Some speculated that the reason for Russian reticence could have been Moscow’s antipathy toward Armenia’s reformist prime minister, Nikol Pashinyan, who came to power in 2018 following the Velvet Revolution and has since tried to foster deeper ties with the West than his predecessors. However, the Russian vision was purely geopolitical.
Armenia, sandwiched between Azerbaijan and Turkey, had no potential alternative patrons and the Russians may have banked on a stinging defeat hurting Pashinyan to attain additional concessions from Yerevan. The defeat did not mean the fall of the densely populated core of Nagorno-Karabakh. This would have been a red line for Russia. Such a defeat would inflict lasting damage to Russia’s reputation in the region: By allowing Azerbaijan to reconquer all its claimed territories, Russia would lose one of its main sources of leverage in the region, over both countries. Therefore, sending Russian peacekeepers to the conflict was a major decision Moscow had been working toward. Such a decision fits neatly into the Russian vision of using unrecognized territories for the geopolitical aim of keeping other powers at bay.

The Russian move was also conditioned by Turkey’s bold policy in the region. Turkey’s very vocal and active support of Azerbaijan cuts at the very essence of Russia’s role as a regional arbiter. Although Russia’s decision to move its peacekeeping troops into the conflict zone is a definite retrenchment of its power in the South Caucasus, Moscow will face an unenviable task in maintaining peace.