The World Standing by Ukraine: Weapons and Financial Support Increased 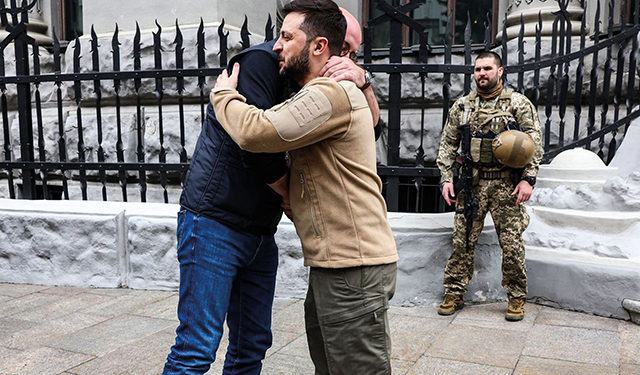 Michel and Ukrainian President Volodymyr Zelensky discussed sanctions against Russia, support for Ukraine’s defense and financial sector, and the questionnaire Ukraine is completing in its bid for EU membership.

On Tuesday, Western leaders promised to provide more help to Ukraine during a videoconference convened by US President Joe Biden, which Michel participated in along with other EU leaders.

The European Union approved an additional 500 million Euros for military equipment for the Ukrainian Armed forces, and Pentagon press secretary John Kirby told reporters that the US will deliver 18 Howitzers and 40,000 artillery rounds to Ukraine in the coming days. The US has also delivered “additional aircraft and the aircraft parts to help them get more aircraft in the air.”

The Russian Ministry of Foreign Affairs warned the US that transferring weapons systems to Ukraine could lead to “unpredicted consequences.”

A Call for Weapons, New or Old
President Zelensky stated this week that until Russia returns internally displaced Ukrainians, until it “returns thousands of children,” it should not get money from European states and companies.

“The EU has no right to sponsor deportation. Ukraine should receive EU candidate status quickly,” he said.

“Just as the Russian troops are destroying Mariupol, they want to wipe out other cities and communities in the Donetsk and Luhansk regions.”

He then again asked for more weapons to be sent, noting that it was “unfair” that Ukraine has to ask for what its partners have been storing in a warehouse for years. If they have weapons that Ukraine needs here and now, he said, then it is their moral obligation to help Ukraine protect freedom and save the lives of thousands of Ukrainians.

UK
UK PM Boris Johnson said this week that Britain will increase the supply of military equipment that Ukrainian needs, noting that the war “has turned into an artillery conflict.”

The United Kingdom has included more than 200 Russian individuals and legal entities in its list of sanctioned individuals.

France
President of France, Emmanuel Macron, said that France “doesn’t need” Russian gas and that they will continue to push for sanctions on Russian gas supplies.

“Europe depends on Russian gas, but France doesn’t need it,” he said.

He denied reports that it was on his initiative that the issue of an embargo on Russian oil was postponed until after the presidential elections in France.

Japan
Japan is sending drones and anti-biological and chemical weapons equipment to Ukraine in the face of increased threats from the Russian side to use such weapons in the renewed fight.

“The Defense Minister of Japan has decided to send special equipment and drones to the Ukrainian government. The struggle of the Ukrainians to defend their country continues, and as such, Japan will continue to help it,” said the Ministry of Defense of Japan.

Lithuania
Lithuania has handed over heavy mortars to Ukraine. The amount of weapons transferred to Ukraine was not specified, although it is known that the cost of military aid delivered by Vilnius is in the tens of millions of Euros.

“Vilnius handed over heavy mortars to Ukraine, the cost of all military assistance to Kyiv is tens of millions of Euros. We gave Ukraine help in form of heavy mortars, I won’t name a number, but we definitely donated more than one,” said the Defense Minister of Lithuania.