The World Standing by Ukraine: “Peace” Talks Continue as the War Rages On 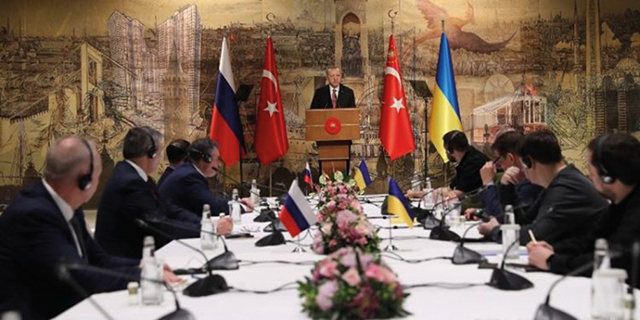 Ukrainian President Volodymyr Zelensky said this week that Ukraine is prepared to discuss adopting a neutral status as part of a peace deal with Russia, but the move would have to be guaranteed by third parties and put to a referendum.

He said Russia’s invasion had caused the destruction of Russian-speaking cities in Ukraine, and the damage was worse than the Russian wars in Chechnya. Ukraine is discussing the use of the Russian language in Ukraine in talks with Russia, but refuses to discuss other Russian demands, such as the demilitarization of Ukraine.

“We will not sit at the table to talk about demilitarization and denationalization. These are completely incomprehensible issues for me,” Zelensky said of an ultimatum presented by the Russian side at the first meeting in Belarus.

“Regarding the protection of the Russian language, I have instructed the delegation that every subsequent day of the war will raise the question of understanding what the Russian language is in general. People themselves do not want to speak Russian. That is why we said that only mirror respect can be given to all neighbors about culture, language, and common values. All this will be decided by a public poll,” Zelensky said.

“Security guarantees and neutrality, our state no longer having nuclear status – this we are ready to go for. This is the most important point. This was the first matter of principle for the Russian Federation, and as far as I can remember, they started a war for it. Then they started adding ultimatum points,” Zelensky said in an interview with Russian opposition journalists.

However, he pointed out that this should be a serious agreement and not just “on paper,” like the Budapest Memorandum.

“I will discuss security guarantees for Ukraine and for them [Russia]. It is a deep process. But I wonder if this will not be another paper similar to the Budapest Memorandum. We are interested in turning this sheet into a serious agreement that will be signed by all guarantors. The guarantor must be ratified in the parliaments of the states and there must be a referendum in Ukraine,” Zelensky said.

He said an agreement on neutrality and security guarantees needed constitutional changes which would require two sessions of parliament and a year of deliberations, and a referendum would be a faster way.

Zelensky demanded that an agreement must be reached with President Putin, and the guarantors will not sign anything if Russian troops are stationed in Ukraine. Zelensky said Ukraine’s goal now is to have Russia withdraw to the compromise areas where they stood until February 24.

“I understand that we cannot force Russia to completely liberate the territories. This will lead to World War III. So I say this as a compromise – go back to where it all started and there we will try to resolve the difficult issue of Donbas,” Zelensky added.

In 1994, Ukraine acceded to the Treaty on the Non-Proliferation of Nuclear Weapons with the Budapest Memorandum of Understanding. The parties to the memorandum – the United States, Russia and Great Britain – pledged to “respect Ukraine’s independence, sovereignty and existing borders” and to “refrain from threatening or using force against the country.” These guarantees played a crucial role in convincing the Ukrainian government to give up on the world’s third-largest nuclear arsenal, consisting of approximately 1,900 strategic nuclear warheads. However, Russia violated this memorandum in 2014 with the annexation of Crimea.

For reference, in 2010, under President Yanukovych, Ukraine was defined by law as a country with neutral “non-bloc” status. Nevertheless, Russia annexed Crimea in 2014, before which it opposed Ukraine’s signing of an association agreement with the European Union. After the change of government as a result of the Maidan events, in December 2014, Ukraine refused “non-bloc” status.

The Peace Talks
A meeting between the Ukrainian and Russian delegations took place in Istanbul, Turkey, hosted at the Dolmabahçe Palace, with the aim of agreeing to a ceasefire.

President of Turkey, Recep Tayyip Erdogan, stressed the need to end hostilities, and expressed his sorrow that the conflict has been going on for five weeks, noting that Turkey is ready to host a meeting between Russian President Vladimir Putin and Ukrainian President Volodymyr Zelensky.

“Moscow has offered Kyiv a meeting between President Putin and Zelensky, which should be accompanied by the signing of a peace agreement by the foreign ministers,” the head of the Russian delegation Vladimir Medinsky said after the talks in Istanbul.

He noted that the meeting was “constructive.” The head of the delegation said they will provide information on the proposals of the Ukrainian side to President Putin.

“Moscow is taking two counter-steps to de-escalate the situation in Kyiv. We also received a proposal from Ukraine. Their position is clearly worded. This proposal will be discussed in the near future. We will inform the president about these proposals and return the appropriate response to the Ukrainian side,” Medinsky said.

Russia then announced its plan to “drastically reduce combat operations” around the capital Kyiv and the northern city of Chernihiv.

“Due to the fact that negotiations over an agreement on Ukraine’s neutrality and non-nuclear status and security guarantees (for Ukraine) are moving to a practical stage, and taking into consideration the principles discussed during today’s meeting, the Ministry of Defense of the Russian Federation has taken the decision to drastically reduce combat operations in the Kyiv and Chernihiv areas in order to boost mutual trust and create the necessary conditions for further negotiations and for the signing of the aforementioned agreement,” Alexander Fomin stated.

The withdrawal of units of the Armed Forces of the Russian Federation from the territory of Kyiv and Chernihiv regions is happening, the General Staff of the Armed Forces of Ukraine said, yet Ukraine claims that the Russian pledge to scale back military operations in two key areas is “probably a rotation of individual units and aims to mislead,” the BBC reported Wednesday.

The announcement from Russia that they will “drastically reduce combat operations” around Kyiv and the northern city of Chernihiv has been met with skepticism from Western leaders,” the BBC wrote, reporting that US President Joe Biden said “let’s see” what happens on the ground, while the UK stated that Russia would be judged by deeds, not words.

The BBC noted that the US and Ukrainian officials say Russia is continuing to reposition forces away from Kyiv, likely as part of an effort to refocus on the country’s eastern regions.

“No-one should be deceived into believing that Russian forces are leaving the Kyiv area,” Pentagon spokesman John Kirby said, noting that “there was a withdrawal of small Russian forces, which is actually a rotation and not a retreat.”

The Pentagon spokesman said large-scale attacks were expected in other parts of Ukraine in the coming days. At the same time, the threat remains for Kyiv.

On Tuesday night, one of the biggest rocket attacks felt so far in Ukraine was carried out, most of the ballistic and cruise missiles being launched from the territory of Belarus.

Russia had claimed it would reduce its attacks on Ukraine as delegates from the two countries met for their latest face-to-face peace talks in Istanbul.

“Russia is trying to buy more time through negotiations with Ukraine,” Melinda Haring of the Atlantic Council warned.

NATO & Georgia
On March 24, in Brussels, the Extraordinary Summit of NATO Heads of State and Government took place. NATO Secretary-General Jens Stoltenberg stated that they are facing the most serious security crisis in a generation. He also mentioned Georgia, noting the brutal invasion of Ukraine highlights the need to provide support to Georgia too.

“I expect that Allies today in the meeting will express their support to partners which are under pressure from Russia, and that includes Georgia. Georgia has the right to choose its own path. NATO Allies have provided support for Georgia over many years to help them to implement reforms, to modernize the defense and security institutions. And the brutal invasion of Ukraine underscores the need to provide support to Georgia,” he said.

“For the past two weeks, the Georgian armed forces and the armed forces of Allied and partner countries have trained side by side to advance interoperability, enhance mutual awareness, and build trust,” Stoltenberg noted. “This exercise, which we conducted for the third time, shows NATO’s commitment to strengthening Georgia’s defense capabilities. By training and educating its armed forces, it is demonstrating NATO’s close cooperation with Georgia.”

The Secretary-General noted that the brutal and senseless invasion of Ukraine has shattered peace in Europe, adding that in this new era, NATO Allies stand together with like-minded partners and countries around the world.

“We will stand up to defend our core principles, including every country’s right to choose its own path. This is also Georgia’s right and it must be respected. Strong and capable armed forces are key to upholding Georgia’s sovereignty and territorial integrity, and NATO will continue to support it in its efforts,” Stoltenberg said.