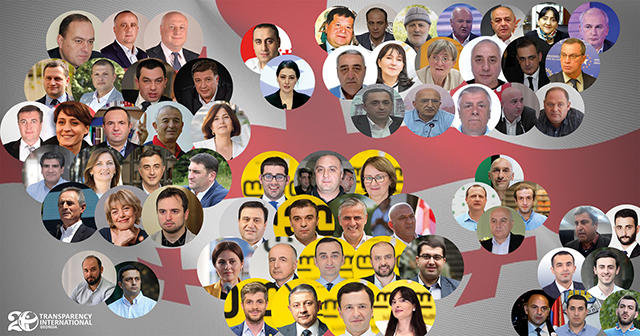 From the 2020 elections. Image source: transparency.ge

A certain number of political parties in Georgia enjoy some funny names, far from the traditional way of denominating a political entity. On one hand it’s a bit of fun, yet it also symbolizes the strangeness of political behavior in this country. Our political map has been motley ever since the demise of socialism here. Literally hundreds of social movements have officially registered themselves as political parties, claiming a say in the life of the Republic. Nobody knows how much good they have brought to the people of Georgia, and certainly most of them have never been held accountable for their political activity.
A story of this multitude in the political arena should be marked by memorable episodes of their (useless) fight to grab the helm of the nation, but it seems their political compass has failed them in most cases. Debilitated by communist ideology and incapacitated by the socialist ways of doing business, the soviet people could not immediately suggest any optimal ways of coping with the new era of development brought on by the downfall of the communist regime and the advent of capitalism, hence the overwhelming desire among the population of that time to dash towards politicking in search of a better life, instead of taking care of the failing economy. For them, the newly introduced western democracy was a bunch of outlandish political principles, based on liberalism: the rule of law, separation of powers, open society, market economy, private property, human rights, civil liberties, political freedoms, social contract, constitutionality, etc. The political philosophy based on these principles is called liberal democracy, which could hardly have made any sense at that particular point in time. And those who had spent seventy years in the patient expectation of communism could not have even suspected that liberal democracy would become the most durable and commonplace political system in the world today.
Sakartvelo is one of the foremost countries on the planet which was made an experimental venue for playing with liberal democracy as the best way for the nation to achieve new heights of modern development. Has it worked? Partially. But for its fully mature advancement, we need to have in the country a fully matured political spectrum, comprising a reasonable constructive opposition at any stage of the multi-partisan political life in the land, not the weird huddle of political wannabes who chronically doubt the election results, no matter how fair and transparent they were; more so if they failed to get elected.
One reason this “immaturity” is so often seen here is that the rules of the game used in constructing a healthy political milieu in the country happen to be flagrantly unfair. Unfair meaning that the interaction between the political powers in the spectrum is based not on the thought of benefiting the nation to the utmost, but on the petite desire of survival and furtherance of their partisan aims.
This is at least the thought that has been forged in my analytical consciousness in the last thirty years as a result of watching the national political process. Take, for instance. the reactionist position in the current struggle for power of the ‘old regime’ which is so thirsty for the revanche that any possible means in their hands looks good enough to justify the cherished end. And one of those cherished ends of theirs smells like revolution, shored up by a radical oppositional attitude which totally ignores the traditional left-right dimensions in political controversy, and presses only on self-adopted infallibility.
Conclusively, I would love to corroborate the suggested grasp of the situation with the fact of refusal by the legally and popularly elected political parties to use their mandates for the genesis of a practicable political conversation in favor of their electors within the walls of the Republic’s legislative body. Instead, our political rebels want to continue their futile act in the streets of Georgia. Thank God, among them, we see supporters of syncretism in politics, preferring neutrality and pursuing the goal of reconciliation between the feuding powers that be.

From the 2020 elections. Image source: transparency.ge