The Weaponization of Political Corruption 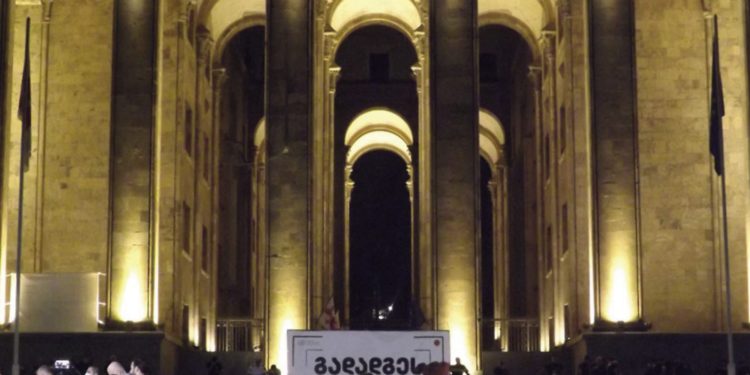 In recent years, high-level, so-called “elite” corruption and the lack of appropriate response to it has emerged as one of the main challenges facing Georgia. – June 2021, Transparency International Georgia

With recent contention between much of the opposition, the press and the ruling government, every relevant tactic has been used to silence the dissenting opinions and resistance. This threat to national stability, democracy, and the rule of law is making it the largest concern in the eyes of internal and foreign observers. However, this is something mostly new to security and defense analysts who traditionally study issues such as Russian military actions and Chinese intelligence activities. While corruption has always been an issue, it is the “weaponization” of this issue that makes it unique.

This weaponization is characterized by the use of traditional corruption as a tool of statecraft in order to undermine democratic institutions and procedures. The proper identification of “weaponization” is important to distinguish as it requires a unique approach to cure. Non-Government Organizations (NGOs) and media, as well as European regulatory bodies and oversight committees, will need to develop a proper and data-driven approach to diagnosing this type of corruption.

Traditional corruption takes its form as not solely individuals in positions of power using that power for personal gain, but also as a systematic form of big-picture governance policy. Weaponizing this takes the form of angling these policies against opposition and partnering with state security elements and the private sector to ensure these policies are enforced, typically in a harsh manner. Coupled with the reallocation of public resources and shadowy cronyism, it becomes a web of unethical and unlawful connections that is difficult to untangle.

The roots of this corruption are buried in the customs and practices employed during Soviet occupation. For those in business and politics, informal deals and connections were the only successful means with which to advance professionally. In addition, it was almost required to procure the scarce resources needed to eke out some semblance of comfort in one’s personal life during that regime. So important were these underhand deals to make any movement in life that there was even a common term for them: the Russian slang word “blat.”

Because these means of conducting business became such a normal way of life, breaking these “bad habits” was exceptionally difficult after the fall of the Soviet Union. With the advent of a growing democratic state, many of those that grew up and worked during the communist era found it difficult to change their cultural norms. As these people found themselves with the right connections to ascend to political platforms, it was all too easy to revert to classic tactics to secure resources and support, particularly in connection and involvement with the private sector.

A recent report from Transparency International Georgia found that this revolving door between the public and private worlds was thriving, and any regulation on it was “nonexistent in Georgia.” In this report, they found seven key instances where former government members in high positions left office only to join senior positions in related fields in private companies, often doing business with their former colleagues to secure special deals.

In order to avoid the enforcement of anti-corruption laws, the connections established with state security and former intelligence members managed to stave off any investigation. As Georgia grew in its diversity of political parties and opposition to these corrupt customs, the state resources were aimed at these rising politicians. Now, as the media has become the new target, these networks between public, private, and security elements are prepared to ensure their web is not discovered and disassembled by prying eyes.

Financial backing of these tactics is also done in a covert manner. While government officials are required by law to declare their assets annually to the Civil Service Bureau (Law of Georgia On Conflict of Interest and Corruption in Public Service, Chapter IV), the number of falsified or incomplete declarations is rising.

By blurring the line between public and private entities, sending money to offshore accounts, and laundering this money through foreign and untraceable routes, corrupt officials are able to keep monetary fuel in their weaponization machine.

The ability to weaponize state institutions and resources to influence, or attempt to influence, otherwise free entities has not gone unnoticed by United States and European anti-corruption organizations.

Continual investigations and reviews show that Georgia is slow to implement any policy that cuts against the system and threatens the shadow web. The Group of States against Corruption (GRECO) in April reported that of the 16 recommendations made to enhance transparency and fight corruption, only 7 had been implemented “satisfactorily.”

The fight to establish a transparent, truthful, and progressive government body seems to require further pressure. The first initiative that needs to be implemented to erase much of the legal loopholes used to skirt regulations is a reduction in the vagueness in current law. Specificity allows prosecution to secure more convictions and reduce the opportunity for corrupt individuals to slide out using either a smart, or more likely a well-connected, defense attorney. While it may seem excessively onerous to expand virtually all aspects of national law, the future dividends it will pay on national identity are immeasurable.

With regard to the issue of public and private relations, and particularly the matter of the revolving door, a change in the statute is required. Currently, under the Law of Georgia On Conflict of Interest and Corruption in Public Service, Chapter III, Article 13 encompasses these stipulations that restrict private sector involvement. Specifically, Paragraph 10 states:

“A dismissed public servant may not, within one year after dismissal, start working in the public institution or carry out activities in the enterprise which has been under his/her systematic official supervision during the past three years. Within this period, he/she also may not receive income from such public institution or enterprise”.

Further specificity is also required in this section as well. However, more concern should be placed on the length of time the dismissed public servant is ineligible to work in the relevant industry. The current requirement of 1 year is clearly inadequate, and needs to be extended. While some NGOs have recommended 2 years, it’s more likely that 3 to 5 years would prove to be far more effective. In addition, the provision stating any enterprise under their purview for the past 3 years should also be extended, potentially for the full extent of their public service.

Increased enforcement and investigative efforts by an independent body should be implemented. This oversight committee cannot have connections to the current government or ruling party, and should be rigorously independent and impartial. Security of the individuals involved with this deciding body is paramount, and membership would potentially also involve those operating in related NGOs. They would be assigned both investigative authority as well as full authorization to publicly publish their findings.

Implementation of the above measures is no guarantee of eliminating the corruption, or the weaponization thereof. However, it is imperative to increase pressure on politicians and government employees to abide by a strict ethical, moral, and legal code of conduct. In addition to the reduction in corrupt and criminal acts, the individuals that are now unable to operate will either be exposed and held accountable, or be forced out of government office due to an inability to operate using their “blat” tactics.

Public office is, and it rightly should be, an immense honor for those involved. Service to one’s nation and fellow citizens, not dissimilar to military service, is vitally important to a prosperous and peaceful Georgia. As such, it comes with its privileges, but it also requires a high degree of public trust and integrity. Erecting a framework that ensures the officials that serve the people do so in an honorable and proper way is the foundation to preserving national stability, democracy, and the rule of law.