The Unprecedented Success of Georgian Numismatics: Coin Designer Kakhaber Topchishvili on His ‘Medea and the Golden Fleece’ 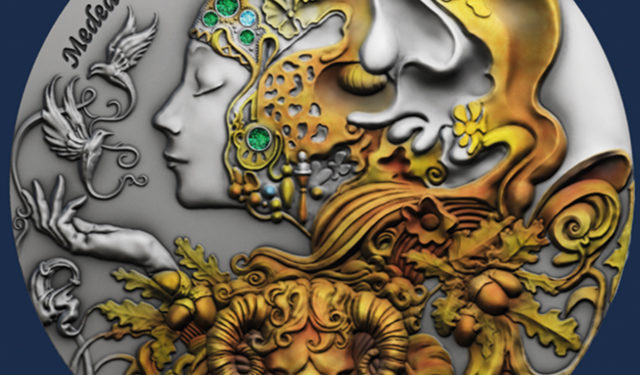 Georgian numismatics this month marked an unprecedented success: for the first time, a foreign coin with the Georgian-Greek theme ‘Medea and the Golden Fleece’ was minted by the Lithuanian Mint.

The inspiration for the design comes from the legend of the Argonauts, the 50 Greek warriors who, legend says, went to Colchis (an exonym for the Georgian polity of Egrisi located on the coast of the Black Sea, in present-day western Georgia) along with their leader Jason to fetch the Golden Fleece, and Medea, the daughter of King Aeëtes of Colchis. The beautiful sorceress Medea aids Jason in his search for the Golden Fleece out of love, assisting him with her magic and saving his life in several quests, before abandoning her home and fleeing with him to Corinth, where the two marry.

This is the first project of this scale to be implemented in the history of Georgian numismatics, seeing a Georgian-themed coin minted in a foreign country and a Georgian designer creating such a project implemented abroad.

The author of this work is renowned Georgian contemporary illustrator, painter and graphic artist Kakhaber Topchishvili, whose works decorate the exhibition spaces of the Zimmerli and Harvard museums, as well as the Moscow Museum of Modern Art. His works also adorn numerous private collections. Today, Kakhaber heads the Ana Peradze Art School in Gori, raising future generations of talented Georgian artists and contributing to the development of modern Georgian painting.

This week, graphic designer Iva Janezashvili announced the new coin in a post on Facebook and claimed authorship, mentioning Topchishvili as a “contributor to the project”. In reality, Topchishvili came up with both the concept and the design, while Janezashvili finalized it for minting and communicated with the Lithuanian side. 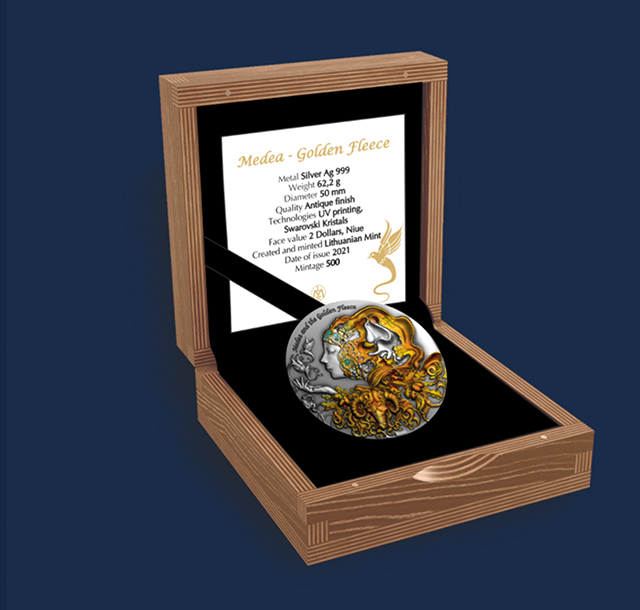 The coin, distinguished by its sophisticated design and magical colors, reflects the beautiful face of Colchis Medea. It is made in an antique style, with deep relief; the colored parts are gilded, and the back of the coin is decorated with five green Swarovski crystals of different sizes.

500 coins with the theme ‘Medea and the Golden Fleece’ have been minted so far as part of the new series ‘Myths of Love’ by Lithuanian Mint. The first (pictured) coin will go on sale in August and can be bought on the official website of Lithuanian Mint.

GEORGIA TODAY went to meet artist Kakhaber Topchishvili to find out more. He told us the exciting news that he is in negotiation with the Lithuanian side to have this coin followed by two further coins to complete the Medea collection, also created by him, but with different illustrations: one reflecting the Argonauts’ leader Jason fighting a mythical dragon, and another reflecting the love between Medea and Jason.

In his exclusive interview with GEORGIA TODAY, Kakhaber elaborated on the great success of his work, the inspiration which allowed him to create this masterpiece, and future collaboration plans with Lithuanian Mint. 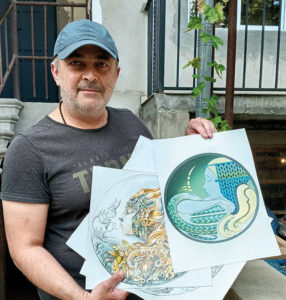 As it turns out, Kakhaber is a big enthusiast of Mythology and Orientalism, a fact which inspired him to create this coin in an antique style. 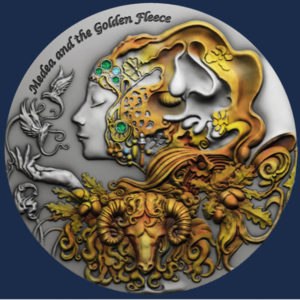 That’s how he chose the theme for his work when collaborating with Lithuanian Mint, a choice which was much appreciated and admired by the Lithuanian side, and, upon seeing even his draft sketches for the coin, they immediately accepted his idea.

Kakhaber’s Medea, like his other works, is distinguished, boasting an individual style and standing out from existing stereotypes. The author tells us he always avoids working in accordance with clichés; that, as a real artist, he works with his own individual view, inspired by fragments from the history of Georgia, Old Tbilisi, its lifestyle and architecture, traditions of Georgian people, and mythical characters.

“When the Lithuanian Mint suggested various themes to work with, such as the zodiac signs, I immediately fixed on mythology, first because it’s a topic that almost everyone is interested in, and second, because I wanted foreigners to be reminded of the synthesis of Georgian-Greek mythology, history and culture. With my work, I wanted to once again tell the story of beautiful Medea from Colchis,” the author notes.

Kakhaber’s Medea can be said to symbolize not only a mythical character, but women in general, in a design which brings together beauty, tenderness and strength.

Interestingly, there’s also a romantic story behind the creation of the coin – when looking for inspiration for the face of Medea, Kakha was inspired by his wife.

“If you look at my wife, you’ll find similarities with the face of Medea drawn on the coin. She has a profile and appearance typical of the ancient period, which also worked as a source of inspiration for me,” he says.

We asked him what had led him on this path of success, and what other works adorn his portfolio.

“After graduating the Tuganov Arts School, I continued my studies at the Faculty of Painting of the Apollon Kutateladze Academy of Arts in Tbilisi,” he tells us. “In 1998, I completed my postgraduate studies with the scientific work ‘Peculiarities of Georgian Painting’. But even before that, in 1993, I was invited to teach painting at the Academy of Fine Arts in Rome, and then in 2003, my works were exhibited in permanent expositions in the galleries of the Zimmerli and Harvard museums.”

“Kakhaber Topchishvili is the most talented representative of modern Georgian painting, whose works are distinguished by a completely different style and manner. Unlike other contemporary artists, he is the only one who paints in the classic illustrative style established in the 19th century,” the Art Palace commission members noted of his works.

Looking ahead, Kakhaber plans to continue his successful career and express his love for his homeland, its history, mythology and characteristic mysticism, through his artworks.

Kakhaber’s collaboration with the Lithuanian side is also expected to continue in the future, with more and more exciting works from the author set to bring Georgian numismatics, and the local history and culture as a whole, even greater international recognition.